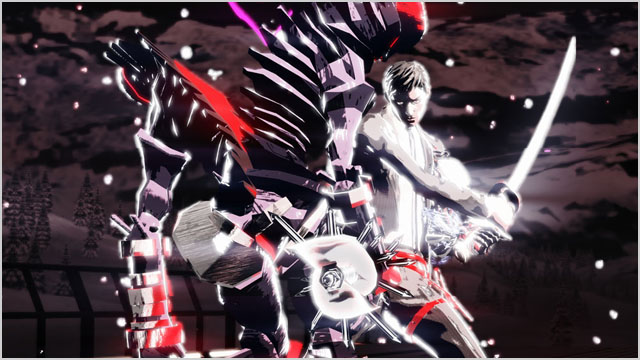 review The idea that games can be art continues to be a problematic one when it comes time to actually discuss games as art. The issue I’ve seen over and over is that any game that dares to push boundaries and ask questions of its audience tends to be derided rather than being lauded for taking artistic risks. Case in point: Killer is Dead.

Goichi Suda’s latest work is not easy to play. It’s not really that entertaining, either. It’s difficult on a theory level, often unpleasant, and loaded with meaning, making it a game that demands multiple replays in order to be properly appreciated. For all of that it’s perhaps the finest example of transgressive, surrealist art that we’ve seen to date in a game.

Everyone knows the word “surrealism,” but too often people misunderstand the art genre to mean “Dali plus weirdness.” Certainly there’s a large degree of the weird in surrealist art, but the genre itself is not about being weird for the sake of being weird. As the grandfather of the genre, André Breton, wrote about it, surrealism was greatly inspired by the theories of psychologists such as Freud, and as such the works of surrealists tend to be striking and often quite disturbing, and often appear as dreamscapes.

And that’s why it’s so appropriate that Killer is Dead’s first real level takes place in a level that mixes Alice in Wonderland with M. C. Escher. The second level is a grand mansion on The Dark Side Of The Moon. The boss of that level is biblical; it’s King David himself. Killer is Dead only runs for 8-10 hours or so (as with most Suda games), but it packs so many references and ideas into that time that it demands a second play through to see and process them all. There’s even the odd moment where the fourth wall is broken – Suda’s way of making sure you realise this game is self referential and ironic rather than another Sin City.

Thematically the game is unrelentingly intense despite those moments of dark humour. Combat is hyperviolent and melee is short and furious. Bosses are horrific monstrosities, and in true Suda style, multi staged affairs that take a range of different strategies to defeat. Individual enemies are not that challenging, but swarms can be deadly and bosses pack a fair punch.

As with Suda’s other action games, such as No More Heroes and Lollipop Chainsaw, the gameplay mechanics themselves play second fiddle to the game’s concept. With Killer is Dead the upgrade system is a little basic and the block/ dodge mechanic is ever so slightly imprecise. It’s not the most rewarding game to play as a result, though it’s only a frustration on the higher difficulty levels. Given that levels are so short, and cut scenes tend to be so long, this is a game that is passive more than it probably should be, but at least Suda knows where his strongest talents lie.

Now, the issue with misogyny; many critics have claimed that Killer is Dead promotes some very unhealthy attitudes towards women. I’ve touched on the issue in a previous opinion piece, but the argument is the “gigolo” sections, where the goal is to seduce women in optional side quests to gain access to additional abilities, is an unhealthy promotion of the concept of the male gaze in the games industry.

And indeed the entire surrealist movement has been the target of feminist criticism in the past. Germaine Greer once wrote in The Guardian: “At the same time that the women of surrealism were endlessly arraying and portraying themselves, as often in carefully posed photographs as in any other medium, the men of surrealism were disappearing into short back and sides, and suits and ties. Femininity was all image; masculinity had no image at all. Real men don’t look in mirrors.” Greer’s interpretation of surrealist art is that it’s a male dominated one, and it’s a movement in which women are often placed on pedestals and symbolically worshipped. In other words, Greer’s reading of surrealism is that it presents women as personality-free objects of desire and mystery.

That criticism does apply to Killer is Dead on the surface, as the game’s women are largely personality-free objects of desire and mystery. But then Suda goes on the attack. These scenes – and the game itself – aggressively presents the leading man, Mondo Zappa, as an excessively seedy an unpleasant person. We’re not meant to really like this guy – he’s an assassin, after all, and one with minimum agency as very little that goes on in the game is of Mondo’s own motivation. On top of that, those gigolo scenes are incredibly uncomfortable to experience. They come complete with a “power-up” allowing players to see through the woman’s clothing to see her underwear, but we’re only meant to use it when she’s not looking. It’s the very definition of creepy. This discomfort is only heightened by the intimate first-person viewpoint, when the majority of the game plays out at a more impersonal third person perspective.

The final clue that Suda is making a point with the gigolo sequences is the trophy system, which refers to “possessing” women by successfully completing the gigolo minigame a couple of times. These mechanics are incredibly common in Japanese games, and in fact are present in some of the most popular and well-respected of them – Persona 4 also has trophies for establishing a romance with the game’s girls, for instance. It’s just that in those other games the mechanic is normalised to the point that the audience tacitly accepts, if no defends its existence within the game. The reason people are objecting to the mechanic’s presence in Killer is Dead is because it is so incredibly over the top that it demands to be noticed.

Surrealists love to shock in order to make a point and criticise societal norms. Killer is Dead is certainly shocking in how it approaches gender but in being such it also highlights how ludicrous gender roles are in modern games. Suda’s previous major game, Lollipop Chainsaw, is quite critical of the expectations of both male and female roles in games. Killer is Dead shows us in a rather sharp fashion how unacceptable many game developer’s approach to gender roles is.

Suda continues to be the preeminent surrealist of the games industry. His work is always interesting, and even though Killer is Dead’s gameplay itself is a little too unrefined for its own good, the thematic strength of it is enough to make it an interesting curiosity to sit on any game library.