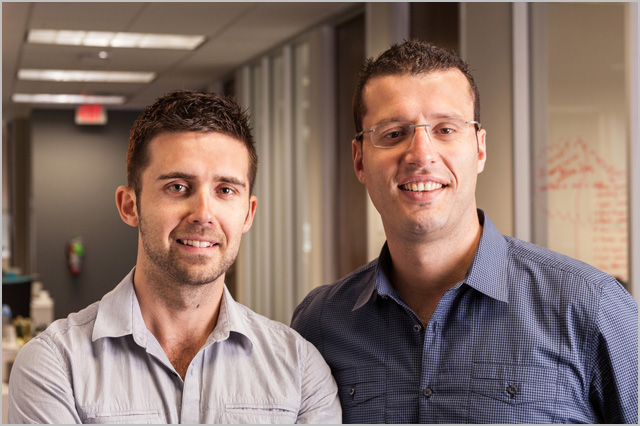 news Australian e-commerce software as a service firm Bigcommerce revealed overnight that it had picked up a further US$40 million in funding, taking its total investment from the US venture capital scene to some $75 million and further illustrating the rapid growth of Australia’s startup scene.

Launched in 2009 by Eddie Machaalani (above, right) and Mitchell Harper (above, left), Bigcommerce bills itself as being a new kind of e-commerce platform that helps (it already has tens of thousands of customers) create online stores, market their businesses and build brands. Until recently, retailers looking to sell online had to go through a complex process costing as much as $10,000 and taking up to six months, according to the company. Through its dedicated e-commerce SaaS platform, businesses can build, manage, and grow e-commerce websites starting from $25 per month.

The newest round of funding announced overnight is a Series C round at US$40 million. It comes from Revolution Growth, a US fund co-founded by US technology entrepreneur and investor Steve Case, best known for co-founding AOL in 1975. Case himself will join Bigcommerce’s board.

“Bigcommerce is a big idea that aligns perfectly with Revolution Growth’s philosophy: that technology can enable any entrepreneur, in any industry, located anywhere, to build a successful, high-growth business,” said Case in Bigcommerce’s media release. “When you combine Eddie and Mitchell’s leadership with Revolution’s track record scaling built-to-last companies, there is real potential for Bigcommerce to reach millions of new businesses and unleash the next wave of e-commerce around the world. Bigcommerce is the big equaliser,” Case added. “Now every entrepreneur can have Amazon-like e-commerce capabilities, in hours – not months or years.”

Revolution Growth’s investment in Bigcommerce is the fund’s largest investment to date, reflecting its commitment to scaling the company and its belief in the potential for Bigcommerce to transform the e-commerce market, according to the pair’s media release. Revolution itself has recently been involved in raising new capital, according to TechCrunch, with a new $150 million round in the offing at the moment to support early stage investments.

The new funding will help BigCommerce “aggressively” build out its platform, adding hooks to empower a rapidly growing ecosystem of apps as well as adding new features and capabilities. In addition, the company will invest in brand and awareness building to enable Bigcommerce to expand into new vertical and international markets.

“Our platform radically simplifies the e-commerce experience for small and medium sized businesses, allowing them to compete and win against their larger competitors,” said Bigcommerce co-founder and co-CEO Eddie Machaalani. “The team at Revolution Growth has a deep history in e-commerce, from its birth via AOL, to investing in a variety of commerce-based businesses in the decades that have followed. Their expertise will be invaluable as we look to rapidly scale our platform and grow our customer base.”

“At our core, we are simply entrepreneurs helping other entrepreneurs build the business of their dreams,” said Bigcommerce co-founder and co-CEO Mitchell Harper. “The new investment capital and partnership with Steve Case and Revolution Growth will allow us to improve our technology, hire new employees, and take a leadership role in the e-commerce revolution.”

BigCommerce’s funding round is one of the largest raised in Australia over the past several years. In July 2010, local enterprise IT SaaS firm Atlassian took a $60 million found from US VC firm Accel Partners, while Accel has also recently invested $35 million into local crowdsourced design marketplace 99designs.

opinion/analysis
Great news for the folks at BigCommerce. I would also note that I see an increasing trend of foreign VC funds investing in Australian SaaS companies which sell platform with a subscription model which scales up as their customers use it more. I strongly suspect that we’ll see more of this type of activity. No doubt these VC firms are attracted to the underlying technology built by firms such as BigCommerce and Atlassian and see a chance to build further adoption internationally. In addition, as BigCommerce’s customers use their platform more, they will pay more — delivering the ability to scale in multiple ways. Sounds like a win for everyone ;)

I sincerely hope companies like BigCommerce, Atlassian and 99designs maintain a strong Australian ethos and continue to be known as “Australian” companies. Too often we’ve seen these kinds of fast-growing Australian technology concerns being sold off to international technology giants, who typically gut the Australian operation and don’t invest any more locally. I hope the new crop of SaaS players can avoid this issue.