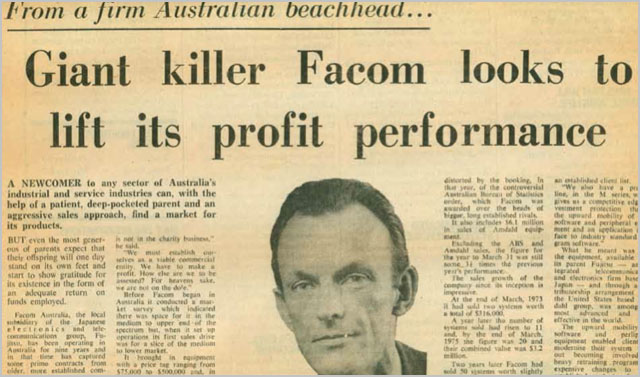 blog Look, I don’t usually like pushing vendor self-reflection initiatives on Delimiter (especially multinationals), but this one’s not too bad as far as such things go. Some of you may be aware that Japanese technology giant Fujitsu recently celebrated the 40-year anniversary of its launch in the Australian market. As part of the festivities, the company hired credible local technology journalist Graeme Philipson to put together an eBook chronicling that period. You can freely download the eBook online in PDF format. We were particularly amused by the sentiments which former IBM executive Mike Rydon expressed to Fujitsu’s Japanese management, upon taking up the post of Fujitsu Australia’s (then FACOM) first Australian managing director in 1973:

During a visit to Tokyo head office before accepting the position of managing director, Rydon stipulated to Fujitsu Japan that the Australian operation “was not a Japanese box export business. It was not something where you produced beautifully engineered products and landed them on the quay and the local natives ran off and put them into the palm trees.

“FACOM Australia was a skill-intensive, personal relationship driven long-term liaison business. You had to do this on the ground with local people who could be respected and accepted by people in the driving seat area of business.” To that end, Rydon ensured that all communication, both within Australia and with head office, was to be in English.

These comments from Philip Bailey — who joined the company in 1974 and still works with Fujitsu as a Service Director — also go far in illustrating how things have developed at the company over the years:

“Another fond memory is of Charlie Rowley, our [mainframe] logistics manager. As each new customer order was confirmed, Charlie would hand-write a new line item on a large whiteboard in his office … Our attempts to get Charlie to move to a computerised logistics system fell on deaf ears. As FACOM’s business grew, we were all intrigued how Charlie would cope once there were more orders than he had rows on his whiteboard. One Monday morning, we arrived at work to find Charlie had repositioned his whiteboard, put another on the wall board beside it, thus allowing double the concurrent shipments to be manually managed.”

I’ve always had a relatively good impression of Fujitsu Australia as an organisation. In terms of the products and services it provides, it’s not dissimilar from HP or IBM, but something about the company’s culture has always seemed a little more ‘wholesome’ than the culture of its rivals. I hear constantly from those who work at IBM and HP how bad the company treats its employees, but I don’t tend to hear the same from Fujitsu staff, who seem a lot more satisfied. Most of my engagements with the company over the years have been quite positive.

And of course, Fujitsu Australia still maintains some Japanese cultural traditions. You can see this in the way it still tends to launch new datacentres by banging on giant drums of sake with wooden hammers, and then toasting itself. One does wonder, however, how the Australian employees would react if asked, as is chronicled in Philipson’s eBook about the company’s early years, to sing Fujitsu’s official Japanese company song. We suspect that would be a sight to behold.

I didn’t mind this eBook. For those who are interested in the history of Australia’s IT industry, it provides a worthwhile snapshot about one of the most enduring companies in it. There’s a lot of sing-your-own-praises vendor guff, but there’s also enough anecdotes and general background about the industry that you get a lot of the vibe of the 1970’s and 1980’s, which younger entrants into the national IT sector may not know much about. It’s worth flicking through if you have half an hour to spare sometime. The book may also provide a bit of a roadmap for other foreign multinationals currently establishing themselves in Australia and facing many of the same challenges, such as Chinese giant Huawei.