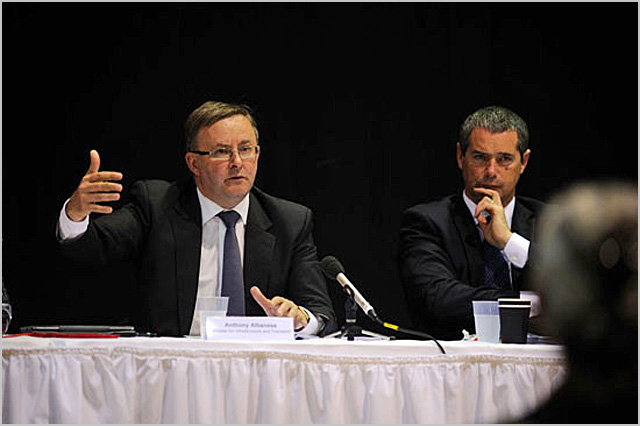 news Prime Minister Kevin Rudd has reportedly appointed Anthony Albanese, one of his key lieutenants during his leadership coup and an experienced senior Minister, to replace Stephen Conroy as Communications Minister in his new cabinet.

Conroy resigned late Wednesday last week shortly after Rudd’s successful ballot to re-take the Prime Ministership and leadership of the Federal Labor Party from Julia Gillard. Conroy had been a key Gillard supporter and had held the Communications Ministership since November 2007 when Rudd first took power, in what has been seen to be one of the longest-running and most successful tenures in the portfolio by an Australian politician.

Rudd has not yet formally announced his new Cabinet, although the members are due to be sworn in by the Governor-General this morning. However, a number of media outlets are reporting that Albanese will add the Communications portfolio to his existing roles as Deputy Prime Minister, Minister for Infrastructure and Transport, and Minister for Regional Development and Local Government.

In other related Cabinet changes which will affect Australia’s technology sector, Kim Carr is reported to have regained the Industry and Innovation portfolio, while it is believed that Attorney-General Mark Dreyfus will retain his portfolio.

iTNews and other outlets have also reported this morning that Rudd has appointed several other MPs with a keen interest in technology matters to assist in the Communications and Industry portfolios. Ed Husic, who spearheaded the IT price hike inquiry, is reported to have been appointed as a Parliamentary Secretary for Broadband, while Kate Lundy has been appointed Minister Assisting for Industry and Innovation and for the Digital Economy.

Albanese is not believed to have had any direct experience in the Communications portfolio prior to his appointment. However, the Member for Grayndler in Sydney’s inner west is a highly experienced member of parliament who was first elected to parliament in 1996 and who has held a number of senior positions since.

Albanese served as the Minister for Infrastructure, Transport, Regional Development and Local Government from in the Rudd Cabinet until August 2010, shortly after Julia Gillard took the Prime Ministership. At that time he lost the Regional Development and Local Government portfolios, but regained them in March this year. Rudd appointed Albanese deputy Prime Minister last week. Albanese has also served as Leader of the House of Representatives since December 2007, a position equivalent to Stephen Conroy’s position as Leader of Government in the Senate.

Albanese has also sat on a number of standing committees; including the Communications, Transport and Microeconomic Reform committee from May 1996 to November 1997; a critical time for Australia’s telecommunications industry during which historic deregulation reforms were being enacted.

In his role as Leader of the House, Albanese has frequently fielded questions about the National Broadband Network (the key project within the Communications Portfolio) on behalf of Conroy — not able to reply as he is a Senator. For example, on June 25 this year Albanese was asked a so-called ‘Dorothy Dixer’ question by Labor MP John Reid about the NBN.

“This is bringing 21st century technology right to people’s homes where it is needed,” said Albanese. “The alternative policy by those opposite proposes fridge-like boxes on the corner of every street and then copper to the home.  In the 21st century they want taxpayers to pay Telstra for 19th century technology – not that their plan has actually factored in paying Telstra for the copper network.”

Albanese went on to attack Shadow Communications Minister Malcolm Turnbull on the issue of the NBN. “Of course the Shadow Minister for Broadband and the Copper Economy [Malcolm Turnbull] is not alone in arguing the merits of copper in this Chamber,” Albanese said. “Indeed, Mr Thomas Brown, a member, is recorded as arguing in the old chamber at the old place (old Parliament House): “Copper is used for greater efficiency”.  He was out there arguing the case for copper, just like the Member for Wentworth today.  You can look it up in Hansard – it was on 23 November 1910.  This bloke would have been a visionary 103 years ago, but today he is way behind.”

“Let me tell you there were similar nay-sayers back then.  There was a fellow that the Member for Wentworth could relate to, Mr Mathews.  He said this: ‘The practical men in the Department, not the theorists, think that nothing is gained by using copper wire for short lines.  Some of the iron wire lines have been in use for thirty years, and give as good results now as copper wire lines.'”

“You can just envisage the Member for Wentworth back then with a top hat on rocking up to parliament and saying: ‘We don’t need this copper rubbish. The iron is fine’. Just like today he argues, ‘We don’t need the fibre. The copper is fine,’ and just like the Leader of the Opposition [Tony Abbott] who sees Sonny Bill Williams at a launch and goes, ‘Oh, is that Sonny Bill or is that an apparition?’”