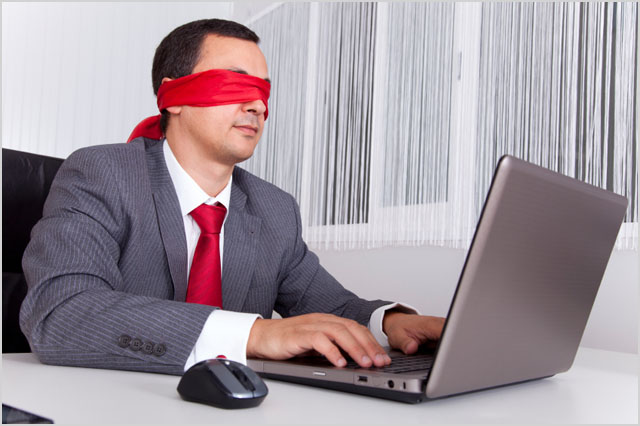 This article is by Peter Gerrand, Honorary Professorial Fellow in Telecommunications at University of Melbourne and the managing editor of the Telecommunications Journal of Australia. From 1991-1993, he was the General Manager for Network Strategy and Forward Network Planning at Telstra. It first appeared on The Conversation and is replicated here with permission.

“The superfast broadband of the order of 100+ megabits per second (Mbps) and into the gigaspeed bracket is de rigueur for any nation purporting to be a developed and advancing economy.” – Phil Ruthven, “A Snapshot of Australia’s Digital Economy to 2050”, IbisWorld, June 2012.

opinion The Coalition should firstly be congratulated upon launching today a detailed, closely argued policy proposal on their alternative vision for the National Broadband Network and how it can be implemented “faster” and at less cost than the current NBN.

Malcolm Turnbull has moved the Coalition light years – or at least several million fibre optic kilometres – from the Luddite criticisms thrown up by the Opposition during the 2010 federal election campaign. And today, with his party leader Tony Abbott, he has released a coherent policy five months in advance of the 2013 election, in contrast to the Opposition’s broadband policy release just three days ahead of the previous federal election, on 13 August 2010.

That said, it was sad to see the number of debating tricks employed in launching his national broadband policy.

There was the conflation of the government’s NBN policies mark I (2007) and mark II (2009), and the selective omission of the “externalities” in the rollout of the NBN — (particularly the long negotiations with Telstra and the business-model-changing interventions of the ACCC) — in order to trash the reputations of both NBN Co and the government, in failing to meet rollout targets announced in either 2007 or 2010.

And there is the claim that the NBN, as a “government-owned telecom monopoly”, somehow inhibits retail competition. In contrast, the Australian telecommunications industry recognises that it has only been through part of the current government’s NBN policy — the structural separation of Telstra and the positioning of the NBN building blocks as wholesale resources available to all retailers on equal terms of usage — that will allow totally equitable retail competition in the supply of broadband.

There was also Mr Turnbull’s claim that in choosing the cheaper FTTN (Fibre to the Node) option, rather than Fibre to the Home (FTTH), the Coalition is following world’s best practice. This political delusion – not shared widely within the telecommunications industry – was recently burst by independent journalist Stuart Corner’s article in the Telecommunications Journal of Australia, “The politics of speed”, where he found that “82% of investment in FTTX (FTTH or FTTN) in 2012-17 in the world’s developed countries is estimated to be in fibre-to-the-home (FTTH)” – i.e. only 18% of that investment is destined for Mr Turnbull’s preferred FTTN.

These debating points must be debunked because they are part of a smokescreen that portrays the current NBN as being needlessly gold-plated, incompetently managed, and ridiculously tardy in meeting Australia’s real needs for broadband – none of which I believe to be true. The reality is that we now have the chance to compare two policies pitched at different timescales of infrastructure need and use – and there are arguments in favour of both approaches. But we need to remember that, under both policies, there will be a world of difference between the timelines set in politicans’ election promises and the hard engineering realities of managing any project of such massive scale.

Let me briefly compare the essential differences between the two policies. First, timescale. The current NBN is based upon meeting bandwidth needs, in the case of the lucky 93% with FTTH, for perhaps three decades beyond the rollout completion in 2021. (Just as the copper access network rolled out by the PMG in the 1950s was intended to last – and generally did last – for a further 50 years.)

The current NBN’s vision satisfies two key drivers. The first is the need for Australia to grow its digital economy, as the only likely growth sector that can complement, and ultimately overtake, the mining industry. The Ibisworld report, from which I have quoted above, lays out a well-argued scenario in which by 2050 some 20% of the national GDP will be generated by the digital economy – if it is underpinned by ubiquitous high-speed broadband.

The digital economy is already a larger employer than the mining industry, and it has the advantages of providing a much greater diversity of highly paid, high-value jobs, which can be teleworked virtually across Australia – given enough access bandwidth.

The second driver is the inexorable historical growth in telecommunications access rates, which has been exponential since the 1950s – see the attached graph from Rod Tucker’s 2010 article, “Broadband facts, fiction and urban myths”. 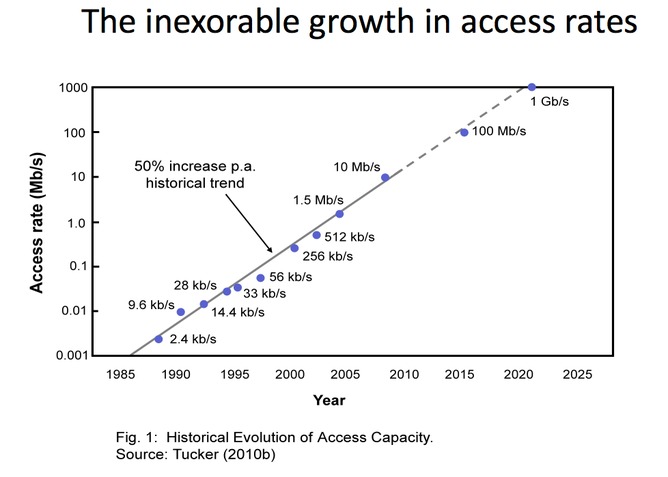 This exponential growth prediction, which is the telecommuncations industry’s equivalent to Moore’s Law for computing, continues to get empirical support – for instance, Google is currently trialling 1 gbps applications in Kansas City.

The current NBN policy is predicated upon building the major infrastructure – the network infrastructure – only once, and its lasting for decades. For this reason, the current NBN policy must be seen as being far more future-proof than the alternative policy. Optical fibre, already capable of supporting bandwidths in terabytes per second, is considered to have a lifeteime of 40 to 60 years. (A caveat is that the new satellites to be launched in 2015 to support the 3% of homes in remote areas will probably need to be replaced in 15 to 20 years. The fixed radio technology supporting 4% of premises can be replaced or upgraded much more cheaply, but should last a good 20 years without upgrades.)

If the current NBN policy is predicated upon providing international competitive advantage to Australia over several decades, the Coalition’s NBN policy can be fairly categorised as a more cost-effective catch-up across Australia of the bandwidth that most households need now, in two stages.

Firstly, within the parliamentary term ending in 2016, their plan aims to universally match the 25 mbps “bar” now set by NBN Co’s fixed radio technology, announced two months ago (an impressive doubling of the previously planned 12 mbps download speed, due to improvements in radio technology). In a second stage, to be completed by 2019, they aim to provide 50 mbps minimum access speed to all FTTN and FTTH premises. This is an excellent aim for a cost-effective short-term (six year) plan.

However, in many cases, the proposed new FTTN technology intended for use in 71% of premises will not reach this speed in areas of low copper reticulation (British Telecom’s solution in the UK requires the use of two pairs of copper per house connected, which is not universally available here), or in areas of ageing or particularly water-prone copper cables (a frequent situation).

The Coalition’s solution is to provide FTTH in these exceptional cases. Without access to their business plan, one cannot see if they have factored in enough cases to affect their budget.

Four quick points in conclusion. Firstly, the Coalition has minimised the likelihood of any rural backlash by basically leaving the current NBN plan intact in rural areas. Secondly, it has not (at the time of writing) released its estimate of the cost of paying Telstra to maintain in working condition the copper network that will link its new FTTN cabinets to customer premises. There is reason to believe that the Coalition will have significantly underestimated this.

Thirdly, the Coalition has behaved extraordinarily like the Gillard government did in 2010 in building an investment case for the NBN that fails to factor in the real benefits to the nation’s GDP, such as to the digital economy – let alone attempting to “capitalise” the benefits of social inclusion through facilitating universal broadband access.

Instead, the Coalition’s proposal reads like an engineering investment case alone – an impression reinforced by Mr Abbott’s statement today that his NBN, unlike the current one, will provide “a real commercial return”. Given all the cherry-picking that their NBN policy will allow to private developers, free at last to directly compete with the NBN’s access infrastructure wherever they can make a profit, there is good reason to think that the Coalition’s NBN will, as a result, inevitably operate at a loss.

Lastly, the Coalition makes much ado about saving taxpayers’ money through reducing the scope and scale of the NBN. In fact, the only taxpayers’ money saved would seem to lie in lower interest payments made by Treasury in the period before the NBN breaks even – in a period of historically low interest rates. These savings need to be offset by the loss to the economy of all the construction jobs associated with FTTH – the most labour-intensive part of the current rollout.