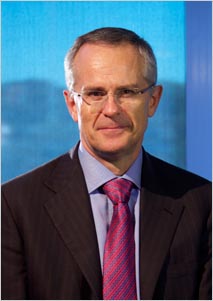 news The Australian Competition and Consumer Commission has issued a draft decision rejecting the ‘Special Access Undertaking’ (SAU) which will guide NBN Co’s long-term relationship with the regulator and retail ISPs, noting that the contract had a great deal of merit but still needed work.

“Having given this matter detailed consideration, and after considerable consultation with relevant parties, the ACCC is providing its views on the SAU submitted by NBN Co. We are today proposing a number of changes, and consulting on the precise form of those changes,” ACCC Chairman Rod Sims (pictured) said in a statement issued this morning.

“… the ACCC’s preliminary view is that it is not satisfied that the SAU meets the relevant criteria for acceptance,” Sims said. “The SAU is a complex undertaking that NBN Co proposes will operate until 2040. It is therefore important that the rights or obligations the SAU imposes on NBN Co, access seekers and the ACCC are reasonable, in the long-term interests of end-users and clearly expressed so that they are well understood by all parties.”

The regulator has issued a consultation paper with a list of proposed changes to NBN Co’s agreement, with the key amendments being:

A number of the proposals, according to the ACCC, are directed towards ensuring that, for matters not directly dealt with in the SAU, the access regime would continue to operate in the ordinary way. They would, the regulator said, also preserve the primacy of commercially negotiated access agreements in the regime.

“An SAU varied in line with the ACCC’s proposals would provide considerable certainty to NBN Co that it will be able to recover the prudent costs of its investment, subject, of course, to demand for its services meeting expectations. NBN Co’s assets would not be subject to re-valuation once the NBN is built, and any changes to price structures would be revenue neutral,” Sims said.

However, the regulator also praised many of the existing features of the SAU as having “merit”. For example, the ACCC said that the ‘modular’ design of the SAU as submitted by NBN Co allowed for different matters to be ‘locked in’ for different periods of time. This meant a balance could be struck between providing certainty about long term cost recovery and allowing for flexibility to respond to changing circumstances.
In addition, the regulator said that the initial prices set out in the SAU were generally likely to allow for a smooth transition from existing telecommunications networks and the revenue constraint providesdNBN Co with the opportunity to recover its prudent costs over the term of the SAU.

Long term commitments not to raise prices above the CPI-1.5% (consumer price index) price control provided significant price certainty, according to the ACCC, and had the potential to create incentives for NBN Co to efficiently operate and invest in the NBN; and commitments to consult with customers on various matters had the potential to reduce “information asymmetries” between NBN Co and its customers.

Following feedback on the proposed changes, the ACCC expects that the next step it would take in the process is to issue to NBN Co a formal notice to vary the SAU. If the ACCC proceeds to formally issue such a notice, NBN Co may make changes to the original SAU within the time period set by the ACCC without having to lodge a new SAU. However, there is no obligation on NBN Co to vary the SAU. The ACCC will aim to issue the notice to vary to NBN Co around May 2013. If NBN Co submits a varied SAU in response to the ACCC’s notice to vary, the ACCC will consult on the varied SAU.

“The ACCC’s draft decision demonstrates that the fundamental framework of NBN Co’s SAU is acceptable to the Commission,” Conroy said in a statement. “The ACCC is generally satisfied with NBN Co’s proposed long term cost recovery arrangements. This will enable NBN Co to recover the government’s investment and earn a fair rate of return. The ACCC is also satisfied with a range of mechanisms that provides certainty for NBN Co’s customers and end-users. In particular, I welcome the ACCC’s support for NBN Co’s initial prices and its ongoing price cap that will ensure prices decrease in real terms until 2040.”

“I encourage NBN Co and access seekers to engage constructively in the coming weeks to finalise the SAU,” Conroy added. “The Commission’s draft decision clearly demonstrates that NBN Co is subject to effective regulatory oversight. “The SAU model is exactly the type of transparency and rigour the government had in mind when the legislative framework around the National Broadband Network was established.”

NBN Co is expected to issue a statement on the decision shortly.

opinion/analysis
This all appears to be normal boring regulatory back and forth between the regulator and the future wholesale telco monopolist; nothing here really stands out as controversial.