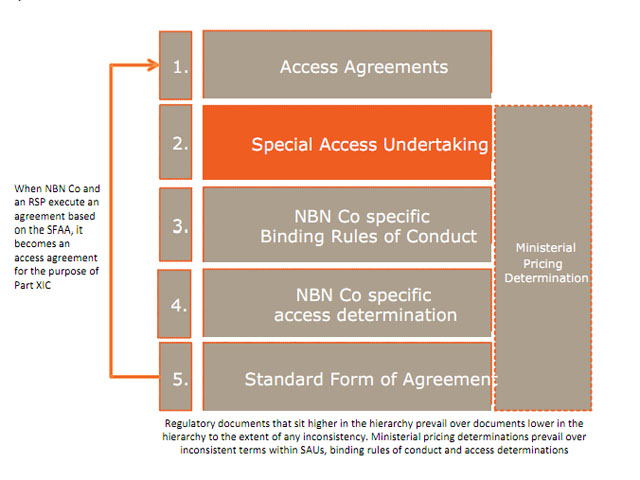 The National Broadband Network Company yesterday published two key documents which will guide how it provides wholesale broadband services to ISPs over the coming decades, using the fibre, wireless and satellite infrastructure which it is currently rolling out.

The first document is the Wholesale Broadband Agreement, which sets out contract terms and conditions with ISPs who wish to provide services over the NBN. It covers issues such as the delivery of services, products, pricing, service levels, technical information, credit policies, future product development and more. Next month this legal agreement will be partnered with a new operations manual which NBN Co intends to release to help ISPs with linking their networks with the NBN.

The wholesale agreement — now in its third edition — has been modified after consultation with NBN customer ISPs. “We have listened carefully to our customers in developing this agreement, and it is the result of extensive consultation with our customers and potential customers,” said NBN Co head of product development and sales Jim Hassell yesterday. “It uses clear direct language and a simple logical structure to give RSPs a comprehensive view of our services and contract terms.”

Secondly, and perhaps more significantly, NBN Co released a discussion paper providing an overview of the Special Access Undertaking (SAU) arrangement which NBN Co negotiate with the Australian Competition and Consumer Commission, which will be the chief watchdog over the company over the coming decades. The two documents are available in full to download online.

The paper lays out a 30-year role for the regulator in overseeing the NBN, broken up into ten and five year periods. NBN Co is seeking responses to the discussion paper by 19 August. It will incorporate feedback into a draft document which will then be publicly released, before a final version then goes to the ACCC.

“The SAU and WBA serve separate purposes but they are designed to be complementary,” said NBN Co Principal of Regulatory Affairs, Caroline Lovell in a statement. “The intention is that the SAU sets out binding commitments on key price and non-price matters, giving customers certainty in respect of these principles. The WBA then sets out the detailed terms and conditions in a way which is consistent with the SAU’s principles.”

The SAU’s key features include the principle that the agreement aims to provide NBN Co with the opportunity of recovering its network construction costs over the next three decades; but it does not guarantee it.

In addition, it lists the ACCC’s powers in regulating NBN Co as well as modifying the SAU itself over the years to ensure that it continues to be relevant. It also sets out the ability of the ACCC to scrutinise NBN Co to make sure it’s keeping up its end of the bargain.

It also provides enough flexibility, according to the discussion paper, so that the ACCC’s approach to regulating NBN Co can change over time as market conditions change and the NBN becomes more of a dominant force in the telecommunications sector. “… the SAU provides for the evolution of the regulatory construct over time to take account of the expected changes in NBN Co’s market position, with NBN Co being subject to higher degrees of ACCC review and oversight over time,” the document states.

Because of this, the SAU divides the period of ACCC oversight into several periods — ten years, then twenty years, with the twenty year period to include regular five-year reviews.

In the document, NBN Co makes a large number of commitments that it will need to uphold during the next several decades — in areas like service and product delivery, price and price controls, revenue constraints, costs and so on. At 55 pages, the document itself is quite lengthy, if not the size of NBN Co’s agreements with companies like Telstra or infrastructure provider Ericsson, for example.