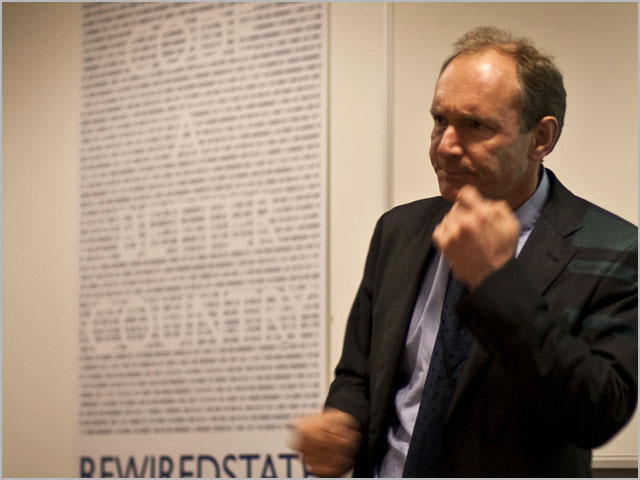 blog You may have noticed from the flurry of articles this week that Australia is currently playing host to British computer scientist Sir Timothy Berners-Lee, who many credit as being the inventor of the World Wide Web. Well, it’s nice to have visiting technology luminaries Down Under, especially when they follow the script so precisely laid out in Delimiter’s (patent-pending) Guide to Australia for visiting Tech Celebrities.

As mentioned in the guide, there are three steps required when visiting global technology luminaries visit Australia. Firstly, journalists must ask them what they think about the Federal Government’s National Broadband Network and Internet filter projects. Secondly, the tech celebrity must respond that the NBN is amazingly visionary and the filter a waste of time and an inhibition to freedom. Lastly, after mouthing such platitudes and meeting their local speaking and customer commitments, they head back overseas.

Berners-Lee has certainly done his part praising the NBN during his time in Australia (News.com.au, ZDNet, Business Review Weekly), and while the filter is now defunct, he’s certainly also done his part damning Australia’s new great Internet evil, the Attorney-General’s data retention (‘OzLog’) project (iTNews, ZDNet, TechWorld Australia). And of course, although Berners-Lee doesn’t actually have Australian customers as such, he’s done an admirable job of hob-nobbing with the supposed creme de la creme of Australia’s tech industry at the CSIRO’s Digital Economy shindig and Linux.conf.au.

It’s nice to see that our Guide to Australia for visiting Tech Celebrities remains so pertinent. Yes, Mr Berners-Lee. The NBN is good. Data retention is bad. Thank you for your wisdom and deep insight.

For the life of me, I can’t understand why Australians continually seek validation for our own experience and opinions from international experts of all kinds. Berners-Lee is, frankly, not an expert on telecommunications infrastructure (his work is conducted much higher up the network stack) and just does not have the expertise to comment in depth on the NBN, apart from to note in general that better Internet is a good thing (well, d’uh). It’s a similar case when it comes to the data retention issue. Again, Berners-Lee does not really work in the area of Internet surveillance and privacy; he explicitly works on web technical standards. He’s not qualified to comment in depth on data retention, apart from his generic background in computer science.

I think it’s something about Australia as a culture that we can’t bet on ourselves or our own opinions and are always seeking to have outsiders such as Berners-Lee (other examples include Vint Cerf, Bill Gates and Eric Schmidt) validate our approach when they visit Australia, regardless of their expertise in the areas they’re commenting on. Why doesn’t Australia have enough confidence in ourselves without these father figures looking on? I just don’t know. Certainly they never tell us anything we didn’t already know.