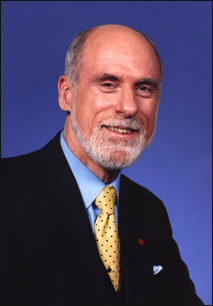 blog Over the past several years we’ve witnessed a new phenomenon in terms of international technology celebrities visiting Australia. When the CEOs of global tech giants or other IT notables arrive down under, they must follow a certain pattern:

This week’s utterings by “father of the internet” and Google chief internet evangelist Vint Cerf during his visit down under to attend the Linux.conf.au conference ticks all of the right boxes. Cerf predictably tells the Australian in two separate articles:

“I consider this to be a stunning investment in infrastructure that in my view will have very long-term benefit. Infrastructure is all about enabling things and I see Australia is trying to enable innovation.” And then: “This (policy) is an understandable desire to be protective of society, but technically I don’t think it’s a very effective move,” Dr Cerf said when asked to comment on the government’s bid to censor the web.”

To be honest, Cerf didn’t contribute much to the debate.

So here’s Delimiter’s challenge to the technology personalities of the world. Next time you visit Australia, what about, instead of mouthing platitudes and top-level statements, you go into some detail? Let’s try for a more nuanced answer. Here’s what Vint Cerf should have said when asked about the National Broadband Network, if he wanted to demonstrate that he truly is a global thought leader:

“What we really need to be talking about now, is not whether or not the NBN is good policy, but about the actual specific details of how it’s being rolled out. I’d like to see a lot more detail regarding the technical implementation and how NBN Co has learnt lessons from other early fibre rollouts in countries like Korea and Japan. Let’s move the debate past policy and finance, which are settled issues now, and onto real technical outcomes. I’m also interested in how we can stimulate the local industry to best take advantage of the fibre infrastructure and attract new multinational players to Australian shores.”

And, here’s a sample answer for Cerf on the filter:

“With the Federal Government’s existing backdown on the timing of the filter project and both the Greens and Coalition being against it, it’s clear the project is dead. I’m really much more interested in talking about the Federal Government’s new desktop Common Operating Environment policy, and whether mandating Microsoft’s Office Open XML format as a pan-government standard is really a good idea. And why is nobody using Firefox?”

If any visiting international technology celebrities wish to be interviewed by Delimiter, you will need to pass the same test when speaking on these issues that we apply to Australian commentators. Is what you’re saying moving the local debate forward? If you are, we’ll be happy to speak with you :)