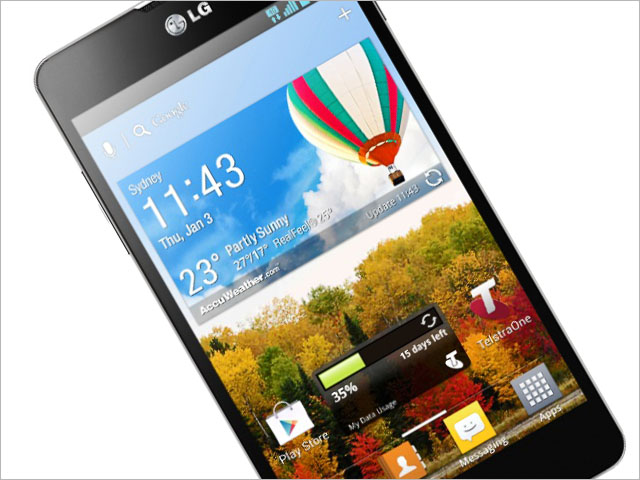 The Optimus G comes with a number of high-end features which make it competitive on paper with other high-end models already on sale, such as Samsung’s 4G Galaxy S III, HTC’s One XL and Windows Phone 8X, the Apple iPhone 5 and Nokia’s Lumia 920, all of which support 4G speeds as well as sizable screens and powerful processors.

The Optimus G sports a Qualcomm Snapdragon S4 Pro quad-core CPU running at 1.5GHz, as well as an Adreno 320 graphics chip. It supports the 4G speeds which Telstra’s network is capable of (generally maxing out at at around 40Mbps) and it ships with version 4.1 of Google’s Android operating system (Jelly Bean). Its display is a 4.7” IPS+ touchscreen panel running at a resolution of 1280×768 pixels, and it comes with 32GB of on-board storage space, 2GB of RAM and a 13 megapixel camera, which helps it stand out from the pack of high-end smartphones with 8 megapixel models at the moment. Its front-facing camera is a 1.3 megapixel model.

“With the launch for LG’s new ‘Superphone’ scheduled for March, we are very excited to announce our partnership with Telstra,” said Lambro Skropidis, General Marketing Manager at LG Australia.”

“Telstra 4G is the perfect complement for the Optimus G, a smartphone that represents the very best that LG offers in innovation and technology, and one that is sure to be a great success with consumers. This isn’t just another high-performance phone with the latest bells and whistles; it’s a collaboration of some of the best component makers on the planet coming together for a singular cause; to develop a smartphone that truly stands out from its competitors and offers consumers practical features in line with LG’s commitment to making lives better.”

“Optimus G is a phenomenal smartphone that combines superb build quality, a beautiful 4.7-inch display and latest quad-core processor technology. When paired with Telstra’s high-speed 4G coverage — which is available in more than 100 metropolitan and regional areas across the nation — it’s a high-performance package we know our customers will love.”

LG said that since its introduction in the third quarter of 2012 to the Korean market, and following that, the US and Japanese markets, the Optimus G had received many accolades including the Korea Electronic Show (KES) Innovation Award for its Zerogap Touch technology, which the company said improves the durability and clarity of the display by eliminating air gaps found in other touch-screens and an iF Design Product Award in November 2012.

Pricing and availability will be announced closer to the launch, and Telstra and LG have not yet started taking registrations of interest from customers.

opinion/analysis
Can LG make great smartphones, to rival the best that fellow Android manufacturers HTC and Samsung can offer? Yes. There is no doubt that it can. Look at the Google-branded Nexus 4 model which launched in Australia in late 2012. It’s a stunning phone and Delimiter rated it the best smartphone in Australia without 4G speeds. You’d imagine that it would be a cinch for LG to replicate this success elsewhere with its own-branded models.

However, so far the smartphones which LG has launched in Australia have been disappointing. They’ve been more than serviceable, but like Sony, LG has struggled to stand out from the pack enough to compete with fellow Android manufacturers like Samsung and HTC, and that’s not even counting the wider competition in the form of dominant player Apple and the resurgent Nokia, whose new Lumia devices with Windows Phone 7 and 8 have been standout devices.

Personally, I’m betting that the Optimus G won’t wow Australia either. This is a model which has some really great specifications – but on paper the Optimus G doesn’t offer much over models from other manufacturers which have been in the market for six months already. And then there’s the price factor. You can bet, with the Optimus G launching through Telstra, that customers will be asked to pay top dollar for it. But Australia is flooded with cheap but great Android smartphones at the moment. LG will need to demonstrate something spectacular — ideally, something spectacular at a spectacular price – before people will pay attention.

And that’s not even counting the new models which many Australians are waiting to see announced at upcoming events such as Mobile World Congress. LG has a fight on its hands to make this one count.