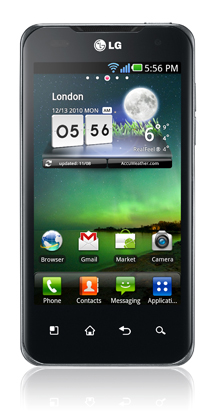 LG today revealed its flagship Optimus 2X smartphone would launch in Australia this month – but without a major telco partner to support it, with the Korean electronics giant to initially sell the handset unlocked through retailer Harvey Norman for the up-front cost of $649.

Typically significant smartphones are launched in Australia in partnership with either Telstra, Optus and Vodafone, or a combination of all three. In a statement, LG said there were plans for the handset to be launched through other retail channels “via open distribution” in the near future.

The Optimus 2X will be one of the first smartphones to hit Australia this year featuring NVIDIA’s Tegra 2 dual-core CPU, which allows performance gains over the previous generation of predominantly Qualcomm-based handsets, which delivered new levels of performance to the market, but were based on just a single core.

It will initially run version 2.2 of the Android platform (Froyo), with an upgrade path to version 2.3 (Gingerbread) “to be advised at a later date”.

The news comes as a plethora of new high-end Android handsets are due to hit Australian shores in the next few months, from competing companies such as HTC, Samsung, Motorola and Sony Ericsson. However, distinct pricing and launch details have not yet been announced for most of the handsets.

“Harvey Norman is excited to be working with LG to bring this great new device to the Australian market,” said Ben McIntosh, general manager of computers and communications at Harvey Norman. “The Optimus 2X, with its dual-core processor and range of cutting edge features, is very appealing to our customers who are always looking for the latest and best in technology.”

“The LG Electronics/Harvey Norman relationship spans many different product areas and we are now looking at how we jointly deliver great smartphone products to market and take advantage of the growing consumer demand in this area.”