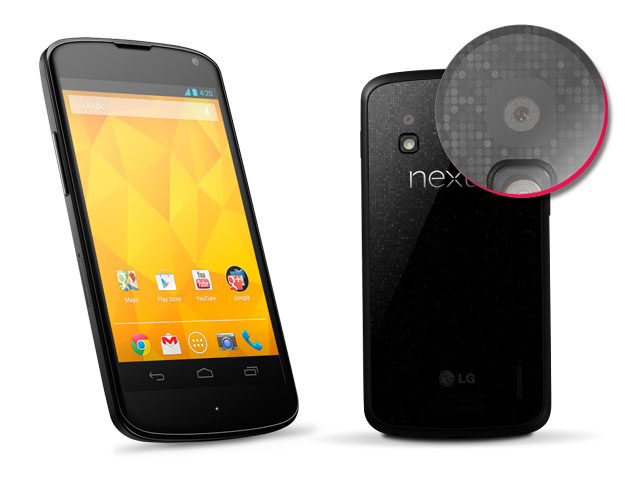 review It’s the new top dog in Google’s flagship Nexus line, but can the LG-manufactured Nexus 4 live up to the standard set by previous models? And can it overcome its lack of support for 4G mobile speeds to be competitive? Read on to find out.

Design
As soon as you pick up the Nexus 4, it is apparent that this device is a cut above the sorts of Android devices that we’re used to seeing from LG, which broadly hasn’t been as competitive with the likes of top players such as Samsung and HTC as it perhaps would have liked. The build quality here is amazing, and this is a device which just loves to sit in your hand.

The Nexus 4 is a black oblong fronted and backed by smooth Gorilla glass. Unlike the Samsung Galaxy Nexus, which had a curved face, its front and back are completely flat, but the sides are made of soft, rubbery plastic and slope gently down towards the back. In addition, the whole phone has a thin layer of a metallic substance running around its top edge, and its corners are rounded. What this adds up to is a phone which is just lovely to hold in the hand. Like the Galaxy S III and the HTC One X/XL, it’s got a large screen — at 4.7″ — but it doesn’t feel large; it just feels nice, thanks to the screen extending close to the edge of its case. It’s 133.9 x 68.7 x 9.1 mm and weighs in the mid-range at 139g.

On the top of the Nexus 4 is just a 3.5mm headphone jack, while on its right sits only a power button. The microUSB port is on the bottom, and the phone’s volume rocker and SIM card slot are on the left-hand side. On its back, underneath the glass or perhaps embedded in it, is a holographic stippled dots pattern, which is only visible if you hold the phone the right way. It’s a lovely effect.

This is going to sound strange, but the overall design of the Nexus 4 reminds us of a top-end Blackberry device, when Research in Motion was absolutely on top of its game. This device screams quality and build quality; it feels expensive but lovely in the hand at the same time. It’s one of the classiest smartphones we’ve held for a while, and we’re sure you will agree.

Features
In terms of its features, the Nexus 4 is also top-notch in most areas. Its 4.7″ screen runs at a resolution of 1280×768, with a pixel density of 320ppi (yes, that is ‘Retina’ level). It has an industry standard 8 megapixel camera on its back and a 1.3 megapixel model on its front. It supports the usual 802.11 a/b/g/n Wi-Fi standards, Bluetooth, NFC and it can do what’s called Slim Port HDMI — where you can connect a device to your TV via a HDMI adapter through the smartphone’s microUSB port.

In its beating heart the Nexus 4 holds a quad-core Qualcomm Snapdragon S4 Pro processor, and it comes with 8GB or 16GB of on-board space, plus 2GB of memory. Unfortunately there’s no microSD card slot, but one feature the Nexus 4 has that many phones do not is the ability to wirelessly charge through a separate hub that Google sells separately. You just plonk the Nexus 4 on the unit and it starts charging — no cables required.

Now, there is one major upside feature to the Nexus 4 which other smartphones don’t have — and one major downside feature which it doesn’t have.

On the upside, the Nexus 4 ships with version 4.2 of Google’s Android platform — the newest iteration of Jelly Bean. We absolutely love Jelly Bean — it’s a hugely beneficial upgrade over the previous version of Android, Ice Cream Sandwich, improving response times on virtually everything you do and synthesizing the sometimes complex Android universe into one unified harmony. Android 4.2 adds new features to Jelly Bean such as gesture-based typing, panoramic photo ability via ‘Photo Sphere’, better support for Google’s Now information prediction service, and more.

In our opinion, Jelly Bean was the first Android operating system which really brought Android up to spec in all areas (except for perhaps third-party app support) with Apple’s iOS platform, and in many ways we think it surpassed it. We find it hard to use any Android phone without Jelly Bean, these days.

However, this lovely upside to the Nexus 4 is tempered by the fact that it ships with no 4G support. Given that Australia has two of the best 4G networks in the world courtesy of Telstra and Optus, we’ve been recommending that people avoid non-4G phones for a while now. The Nexus 4 does come with support for HSPA+, which is the fastest the 3G networks of Telstra and Optus can do; but forget about accessing 4G speeds and latency on the Nexus 4; it just won’t do that.

In terms of the Nexus 4’s UI performance and how it does in the hand, lock away your daughters. This dog is hot; and we don’t mean its battery is overheating. Courtesy of its Android 4.2 operating system and stellar hardware design, the Nexus 4 is hands-down the best smartphone we have ever used in terms of its overall experience. Coupled with a fantastic screen, this makes it a winner.

We’ve maintained for a long time that the best Android experience is the stock Android experience — without the kinds of extra cruft which manufacturers like HTC and Samsung like to layer on top of Android to differentiate their handsets. And in the Nexus 4 this is displayed to perfection. Project Butter has made Jelly Bean silky smooth; just navigating around the operating system is a joy, and it puts iOS’ blocky, outdated user interface to shame.

The new camera interface is great — why wasn’t it always this way? — and the Photo Sphere feature for panoramic views is a little buggy, but heaps of fun and works well enough that we can see ourselves using it on a regular basis to capture those scenic vistas. It’s easy to use — you just align each new shot to the next blue dot and it creates a panoramic for you after a few shots.

The new notifications system and easy access to certain most-used controls such as Wi-Fi is a much-needed addition to stock Android (some third-party manufacturers have been doing this for a while), and gesture typing (think Swype) is solid, even if many won’t prefer it and most probably won’t even know it’s there.

The Nexus 4 really shows how software, rather than sheer processing power, makes or breaks a smartphone these days. The Nexus 4 feels a lot faster than any other smartphone we’ve ever used. We can’t emphasise this enough: Like the Nexus 7 tablet before it, it’s a delight to use.

Battery life on the Nexus 4 is solid but not exemplary; its 2100mAh battery is quite large, but the phone’s large screen and processing power means its battery will basically drain after a couple of days of light to moderate usage. It will last longer than most 4G smartphones we’ve tested, but it’s not on par with the old generation of devices which you could use for a week. Expect to easily get one full day of moderate use out of the Nexus 4 or two days of lighter use. And as with most high-end models, if you leave it on a desk for the better part of a week, it’ll probably be dry at that point.

We were quite impressed with the Nexus 4’s camera. In all conditions it held its own. We shot the below shots (click for the larger versions) on an overcast day in Sydney with various competing models. The shots have been cropped and saved in Photoshop Elements at a JPG level of ‘6’, but otherwise unaltered. Out of all the phones we tested on that day, the Nexus 4 was close to the top in terms of image fidelity and colour reproduction. 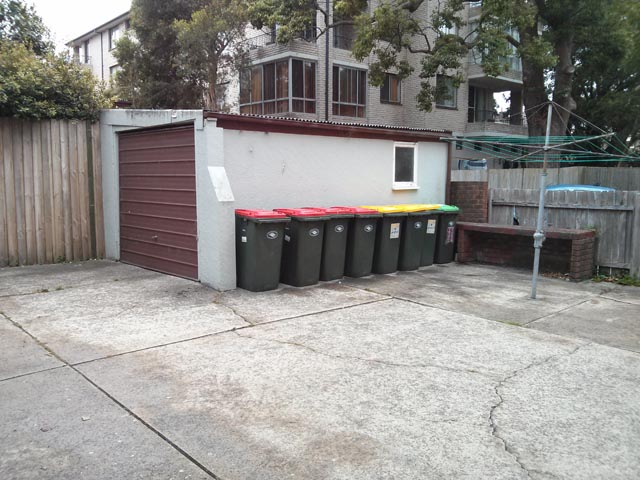 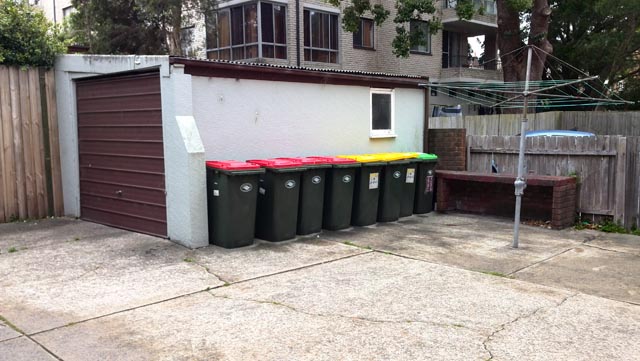 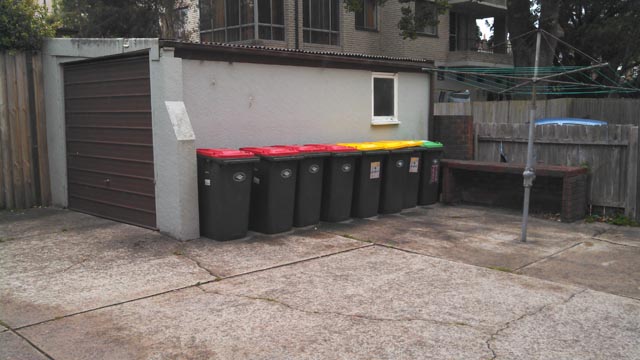 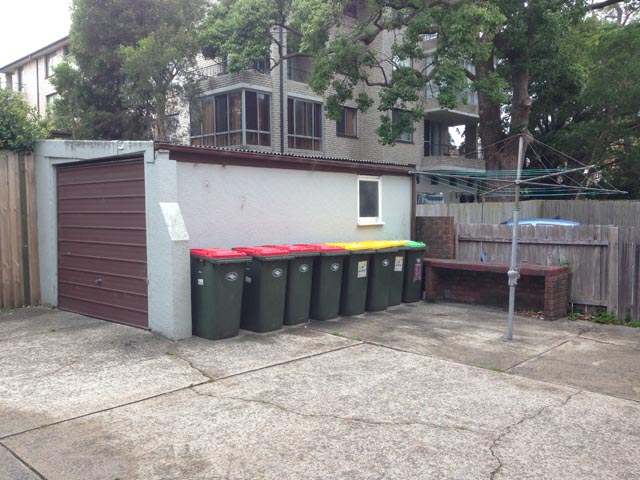 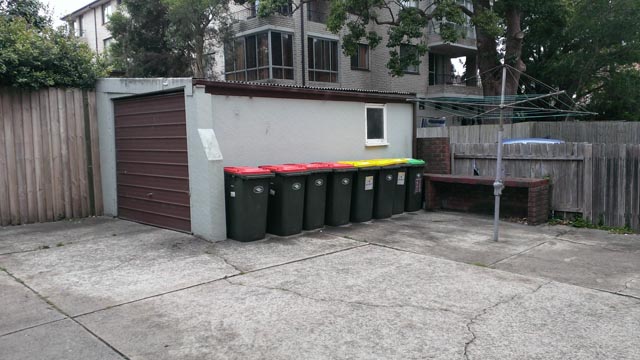 There is one other aspect of the Nexus 4’s performance which we need to mention here: Its price. At AU$349 for the 8GB model, or AU$399 for the 16GB model, Google’s selling this baby at an incredible price; frankly, one that’s hard to believe, given how much quality is packed in here and how much more expensive the competition is. We just find it hard to believe that you can buy something this good for $349. It’s good times for Australian smartphone buyers indeed.

Conclusion
Google and LG have really gone all out on the Nexus 4: This is easily one of the best smartphones of 2012 by any measure, and it’s been a pleasure to review it.

Right now, if you take its lack of 4G support out of the equation, the Nexus 4 is the best smartphone available in Australia. Its combination of the latest stock Android experience and stellar hardware build quality boost this model above the competition easily (including, for our money, the iPhone). And when you factor in the price, it becomes almost an insta-buy (probably why it is temporarily sold out right now). The only reason not to go with the Nexus 4 right now, on that basis, is if you’re really invested in the rival iOS or Windows Phone operating systems.

However, that lack of 4G support is still a problem. Most Australians are on two-year smartphone upgrade cycles right now, and if you’re the sort of person who is aware that the Nexus 4 is out there (given it’s mainly sold online through Google’s own store at this point), then you are likely an early adopter aware that 4G delivers huge benefits ranging from latency to speed to smartphones.

This is what we call a first-world problem. All of the choices are great.

If you love Android and don’t care about 4G, buy the Nexus 4. It’s an easy choice. If you’re ambivalent about operating systems and don’t care about 4G, buy the Nexus 4. Its operating system is as good as iOS and it’s literally half the price of the iPhone 5. Why pay double for Apple if you don’t need it? If you must have 4G speeds, the best smartphones in Australia right now are the 4G Galaxy S III, the iPhone 5 and possibly Nokia’s Lumia 920, which we haven’t tested yet. But even so, it may be worth checking out a friend’s Nexus 4, if you can. The cheap price coupled with the Nexus 4’s other advantages may convince you that 4G speeds are a nice to have rather than a necessary for now.

We’ve said it before, but we’ll say it again: It’s a fantastic time to be a smartphone buyer in Australia. An extreme top-flight Android phone for $349? It’s a beautiful world.

Other reviews of the Nexus 4: CNET Australia, Engadget, The Verge.