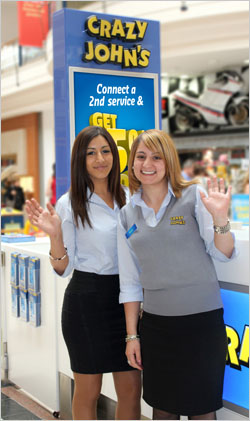 news Mobile telco Vodafone has confirmed it will shortly dump the Crazy John’s brand from its retail stores and re-brand them under the Vodafone master brand, in a move which will also see the closure of some Crazy John’s stores entirely.

The company bought a controlling share in Crazy John’s in late 2008, following the death of the chain’s founder John Ilhan. At that stage the plan was for the brand to remain a stand-alone brand within Vodafone and for new Crazy John’s stores to be opened. However, since that time Vodafone has sufferered greatly financially, with the company continuing to lose hundreds of thousands of customers and hundreds of millions of dollars each year due to the issues with its network which have come to be known under the ‘Vodafail’ banner.

Today, following a report on Ausdroid, a Vodafone spokesperson confirmed the company was “streamlining” its retail brand presence to one single brand — Vodafone. “As a result we will be closing or rebranding our Crazy John’s stores across Australia,” they said. “We will continue to support our Crazy John’s customers through our Vodafone stores and dealerships.”

The spokesperson added: “Some of our Crazy John’s locations will close, while others will be transformed into Vodafone branded stores over the coming months. Existing Crazy John’s customers will continue to enjoy the value and great service through the Vodafone store network, as well as online, customer care 13 22 99 and mobile MyAccount service.”

“We plan to exit Crazy John’s retail outlets on the 20 February 2013. During this transition period we are committed to ensuring a smooth transition for our customers and will do our best to redeploy as many Crazy John’s retail employees as possible to work in one of our many Vodafone stores. It wasn’t an easy decision to make but it is necessary to remain competitive and to ensure we focus our investment where our customers and people will benefit most.”

It’s not yet clear how many stores or staff will be affected by the change, but Crazy John’s site currently notes that the chain has some 400 staff across Australia. A search on the company’s site showed about a dozen stores in major retail locations across Sydney alone.

Vodafone’s move to ditch the Crazy John’s brand is not the first time it has gone through a major store and online re-branding process over the past several years. In mid-August, for example, the company ditched its ‘3’ brand which it inherited through its merger with early 3G entrant into Australia Hutchison. The news marked the end of one of the most persistent challenger brands in Australia’s mobile market, and the closure of Crazy John’s will do the same in the retail segment of the mobile market, with the company having been a prominent force in the market due to its rapid expansion and the enthusiasm of its founder John Ilhan.

opinion/analysis
This one’s been coming for a while, folks. Ausdroid first posted rumours about the closure of Crazy John’s stores in August 2012, and Vodafone’s poor financial performance and new managing director this year, it was only a matter of time before Crazy John’s went on the chopping board along with the ‘3’ brand. Personally I see this as a completely rational move for Vodafone.

I’ve never bought anything from Crazy John’s, personally. However, I want to say that I personally see this as quite a sad move — the same way I viewed the closure of the ‘3’ brand. Crazy John’s was such an Australian institution in Westfields around the nation. It’s sad to see it subsumed into the multinational Vodafone conglomerate. This happens all too often to Australian companies for my comfort. But then, that’s the way things go, I suppose.