news The National Broadband Network Company has declined to provide updated statistics relating to how many premises its predominantly fibre network has covered over the past two and half months, stating that it will only release updated details on its rollout every calendar quarter.

Late last month Shadow Communications Minister Malcolm Turnbull heavily criticised NBN Co for primarily using its “premises commenced or completed construction” measure for judging how far its rollout has progressed around Australia and how many Australians have started using the network, despite the fact that its own corporate plan benchmarks it primarily on the number of premises its network has passed and the number of active services on its network.

Subsequently, Delimiter contacted NBN Co earlier this month seeking updated figures on how far its network has progressed since the company last released details about its rollout progress to the end of September — almost two and a half months ago. In a detailed statement in response, an NBN Co spokesperson declined to released updated statistics on the company’s rollout but said it released figures on a quarterly basis, which they said gave the public “far greater visibility of progress with the NBN than any listed corporate that reports on a six-monthly or annual cycle”. Delimiter is planning to file a Freedom of Information request to source more updated statistics relating to the company’s rollout.

NBN Co’s progress to the end of September (see table below) appeared to show the company had not yet started rapidly accelerating its network deployment, with the company at that stage only having passed slightly over 50,000 premises since it started deploying its network, and 179,790 satellite and fixed wireless premises. The company did not break up its satellite and wireless technologies into different figures, despite the fact that the technologies are completely unrelated in terms of NBN Co’s rollout. 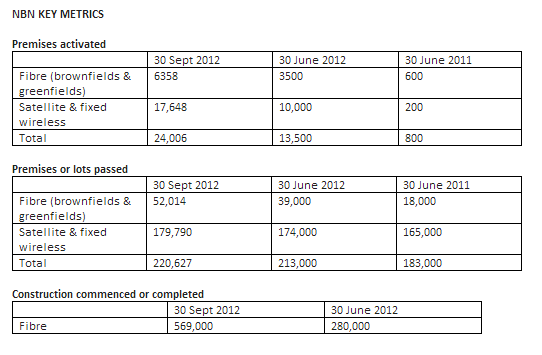 The numbers NBN Co has released so far don’t give the whole picture of the company’s construction effort. It is currently in what it describes as its “ramp-up” period, where it is rapidly accelerating its network deploying, following the finalisation of its early stage planning process. The company is currently deploying fibre to some 569,000 premises. In the quarter to 30 June this year, NBN Co was deploying fibre to some 280,000 premises — meaning it has added on substantial additional construction activity in that quarter.

The figures demonstrated that “the ramp-up in construction activity is now well underway,” NBN Co’s spokesperson said. “The number of premises for which construction has commenced or is completed has more than doubled between June and September.”

NBN Co’s spokesperson pointed out that the company had aims of having commenced or completed construction in 758,000 premises by the end of December 2012, and that it had a goal of having its fibre past some 286,000 premises passed in brownfields areas by the end of June 2013, with some 44,000 active fibre users planned for that same date.

The Coalition has sharply criticised NBN Co’s rollout speed on an ongoing basis, with Shadow Communications Minister Malcolm Turnbull comparing the company’s speed to that of an “arthritic snail” and Liberal MP Paul Paul Fletcher last week describing it as a “costly failure”.

“Progress to date gives us a degree of confidence that we are on our way to achieving these targets. How can we be confident when there is still so much to do? Because the quarterly increases in activity are not linear. They are indicative of a steep yet achievable ramp-up in construction activity.

Remember, it takes on average about 12 months from the commencement of construction in a particular site to homes and businesses being able to activate. That means those 280,000 “construction commenced or completed” areas from June this year are expected to be up and running by the middle of 2013. That, in turn, should lead to a concurrent rise in activations.

For instance, construction is nearing completion in Coffs Harbour, Gungahlin in the ACT and South Hobart. These sites will go live and householders will be able to order NBN services in the New Year. In the months that follow we’ll also see the first fibre sites become active in WA (including the Perth suburb of Victoria Park) and the Northern Territory (Darwin), as well as additional locations in Qld (Aspley, Toowoomba and Goodna), Victoria (Bacchus Marsh), Tasmania (Launceston) and NSW (Riverstone in Western Sydney and Tamworth).

And that’s not including those new locations that will come online in outback regions via the Interim Satellite Service or additional Fixed-Wireless sites such as some of the smaller communities surrounding Geraldton, Shepparton, Ballarat, Darwin, Bendigo, Mackay, Launceston and Tamworth.

We are also happy with the rate of activations to date. For instance, it took the UK four years to achieve an FTTH/B take-up rate of 2% of homes passed. By contrast, the NBN has take-up of about 15% with some sites well ahead of that (e.g. Kiama is now around 45% and Willunga is not far behind). These are very good numbers and they occurred before any steps had been taken to shut down the copper.

So the rollout is on track, the ramp-up in construction activity is well and truly underway and in short order more locations in more parts of the country will be coming online.”

opinion/analysis
Right now you’re probably thinking: But we knew all of this — why is Delimiter pursuing this article when NBN Co has already released these statistics? Isn’t this just re-hashing the past?

The answer is that, as I wrote several weeks ago, I agree with Malcolm Turnbull’s argument that NBN Co’s focus on nebulous statistics regarding the number of premises where it has commenced or completed construction is misleading. In my opinion, the company should stop using this figure as a primary benchmark of its progress, and focus only on areas where it has actually finished building the NBN. This is the only real benchmark which we should be holding NBN Co accountable to.

As part of that article several weeks ago, I committed to asking NBN Co for updated statistics about the amount of premises its rollout has passed, as well as the number of active services on its network, every month, on the 1st of the month.

Now let’s not beat around the bush here. NBN Co know how many premises its network has passed. It knows how many active services it has on its network. No doubt this is one of the most pervasive topics of discussion within the company, at all levels. But last week, NBN Co failed its first test put by Delimiter in being transparent with that information. Given the important nature of the NBN rollout, the sensitive stage that that rollout is at, and the fact that the state of the network rollout will be a key item in the debate around the next Federal Election, you would think it would be absolutely in the public interest for NBN Co to tell Australians how far it has rolled out its network more than once every three months.

If the network is ramping up as NBN Co claims (and as I continue to believe that it is), then NBN Co has nothing to worry about disclosing this information. If NBN Co started disclosing its rollout statistics on a month by month basis, it would be easy to see that the company was rapidly accelerating its network deployment. This is why these statistics are so important.

The fact that NBN Co has declined to do this plays strongly into the Coalition’s narrative that the company’s rollout is extremely slow and behind schedule. Because, based on its current numbers of premises passed and active services, there is very little evidence that NBN Co’s network deployment is actually going as NBN Co has planned. The company says things are fine — but without regularly disclosing real numbers of how many premises its network actually passes (not just how many are in some stage of construction), it’s hard for the skeptical to take the company at its word.

Apologies, NBN Co, but we’re not giving up on this one. With a Federal Election coming up next year, Australians need very regular updates on the material progress of your network rollout. Expect a Freedom of Information request this week for the updated stats — and expect our next call on 1 January for the updated stats. Transparency can be a bitch — and so can democracy — but in our jaded society, it’s one of the things we have to hold onto the most.