This article is by Anastasia Powell, Lecturer in Sociology at La Trobe University. It first appeared on The Conversation and is replicated here with permission.

analysis Don’t read technology blogs? Then a new innovation in massively multiplayer online role-playing games (MMPORGs) may be passing you by. Perhaps, like me, such games have never been of much interest to you. Or perhaps they haven’t been able to hold your sustained attention. So why should you care now?

Because, as I have discovered since playing Google’s new Android-only augmented reality (AR) game Ingress (launched earlier this month by invitation-only), you are already potentially interacting with its players as you go about your day. Perhaps my fellow Ingress players and I have even bumped into you in the street because we were obsessively watching our smartphones instead of where we were walking (sorry, by the way).

Already, technology reviewers are commenting on the addictiveness of the game, and the huge data gathering and marketing potential that it promises.

But what I have found most compelling while playing Ingress around the streets of Melbourne is the level of real-world social interaction possible. This represents a significant shift in how we experience our relationships with technology and with each other.

So, what is Ingress? Ingress is an augmented reality game, which essentially overlays the real world with additional information through a digital device (such as your smartphone, tablet, or perhaps in the near future, digital glasses). In Ingress, players pick one of two sides or “factions” (Enlightenment or Resistance) and visit real public places to capture “portals” (often key landmarks, public sculptures or art). By capturing these places displayed on their smartphones players can link portals together to create “fields” and gain control of territory for their faction.

It is a power struggle to take possession of territory and either harness the portals for the betterment of mankind or protect mankind from the dangerous energies they emit (depending on which faction you belong to). The following is a map of the fields currently established in Melbourne: 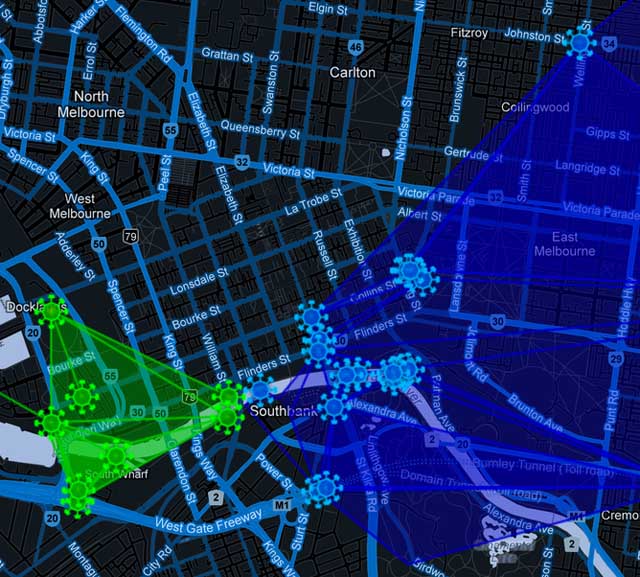 While it is possible to begin the game as a sole-player, the battle for control ultimately relies on collaboration between players in the local area. To be successful, players need to share information, orchestrate their attacks on enemy portals to re-claim them for their faction, and even meet-up in the real world to attack together simultaneously. There’s also the real risk of running into the “enemy”, literally, as they attempt to defend the site you and your faction are attacking … and then you might head off to the pub together to commiserate.

As a mostly non-gamer (but avid technology-user) I was not a natural candidate for an early invitation to play Ingress. But after just a week of playing I have found myself strangely obsessed by this innovative concept in game development. Already I feel a real obligation and loyalty to my faction, the Resistance, who I am communicating with not just in the game but also through my social media.

A key attraction of the game is that I’m not spending hours sitting on my couch, eyes glued to the television, interacting online with people halfway across the world that I don’t know. Ingress has me walking the streets of Melbourne, enjoying the sunshine, taking in some key landmarks and public art I have never really paid attention to before. Since it is played via my smartphone, the game is also always with me, and so is the temptation to check on the status of my portals as I move about my day.

There has been so much media coverage of the social “ills” of the internet lately (such as harassment and cyber bullying) that you could be forgiven for forgetting there’s plenty of positive and meaningful social interaction that takes place online.

In fact research suggests much of the misogyny, racism, homophobia, and just plain nasty vitriol directed at people in online spaces is at least partly due to the nature of online interaction being largely anonymous and lacking in real face-to-face interaction.

If this is the case, then one strategy for addressing such behaviour is to reduce the incentives for remaining completely anonymous. In an augmented reality game such as Ingress, there’s a natural incentive to ensure your online communications in the game are fair and friendly since it may not be long before you encounter other players face-to-face in the street. Indeed, while my screen name may not give away my identity, the need for real-world collaboration and information sharing makes remaining completely anonymous somewhat impractical. The fact that my teammates and the opposition are identifiably “real” and not faceless “others” also promotes a closer sense of community and fair play.

Online gaming communities already have a reputation both for fostering real social relationships and for taking action against those who violate the community rules.

Indeed establishing a clear ethics for online interaction or an enforceable community code of conduct seems particularly relevant when gaming takes you out into the real world. The Ingress Community Guidelines specifically preclude:

Players face having their account terminated if they breach the rules. Of course many of the above actions would also be considered criminal under local laws; particularly if they were to take place in the street. That said, it may be less the threat of consequences for breaches, and more the nature of the social relationships and trust developed within the game itself that will facilitate ethical player behaviour.

Ingress opens a window into the possibilities of augmented reality for our future relationships with technology and each other. It is a world where the “real” and the “virtual” are much more interconnected. A world where technology blends seamlessly into our everyday interactions. It is also ultimately a socially regulated world. As our digital and physical selves become more interrelated, maintaining an ethics of online communications and facilitating trust between collaborators (who are always both online and offline) will increasingly become standard operating procedure.

Now, if you’ll excuse me, I’ve got a portal to defend …

Anastasia Powell receives funding from the Australian Research Council (ARC). This article was originally published at The Conversation. Read the original article.