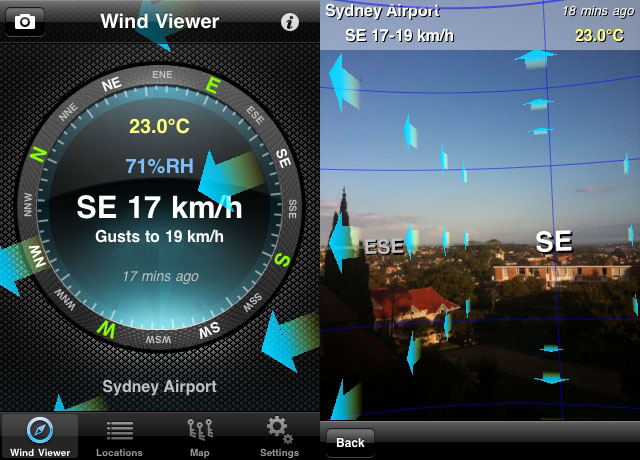 Version 4 of Apple’s iPhone will launch Down Under in July, delivering local iPhone app developers a bevy of new features. But what do the developers themselves think of Apple’s new baby? To find out, we spoke with Australian developer Graham Dawson.

Dawson’s company is Ajnaware. It has developed quite a few apps for Apple’s mobile platform, with its most recent being See Breeze — an augmented reality wind visualizer (pictured). You can find out more information about the app in a post on Ajnaware’s blog.

One new feature in iPhone 4 is a built-in gyroscope which gives developers access to six axes of motion control — with the feature adding to the iPhone’s accelerometer and compass.

“I think if you combine that with the new gyroscope data that will provide a much better user experience so I’m really looking forward to getting my hands on that.”

Dawson said the gyroscope data would be very useful for game developer, as it would allow, for example, developers to set up situations where the iPhone could be twisted to simulate hitting a baseball with a bat. “That certainly affects the applications I already have — the augmented reality — so that’s one that’s really quite exciting and I will be looking into that in great detail,” he said.

The new 3.5″ multi-touch 940×640 pixel display will make applications clearer and game graphics pop, compared to the 3GS’ 480×320 display. “That just adds to the already very nice user experience and it isn’t even necessary for existing apps to recompile to cope with that high build — more likely it will just render it at the high resolution, which is just fantastic and makes it very easy,” said Dawson.

iPhone 4 has the custom-designed Apple A4 processor, as does the iPad, that Apple flaunts as being multi-tasking enabled. But when Dawson was asked about what he thought of the new processor in the iPhone, he said it didn’t provide true multi-tasking.

“It’s closer in practice to simply swapping apps in and out of processor, where the apps retain their state instead of having to be restarted,” he said. “There are still a few things apps can do while swapped out, but these are quite limited. For example, it isn’t possible to run an app in the background which queries a server from time to time.”

In that regard, Dawson said, the new ‘multi-tasking’ functionality wouldn’t remove the need for developers to run their own push notification server, if they already did so.

“As a dev I find this a little disappointing,” he said, “but I understand that these limitations are to retain device performance levels, so I can accept them. But the pseudo-multitasking will still make for a better user experience for more advanced users. On the other hand, I suspect many (non-tech) users will probably never even use this capability.”

The iPhone 4 introduces high definition video recording in 720p, moving the iPhone into competition with similar-sized handheld video cameras such as Cisco’s Flip.

“Having your own HD video camera thrown in to the package certainly increases the value proposition of buying an iPhone,” said Dawson. “And I’m looking forward to seeing a big improvement in the average video quality (and quantity!) that we see on YouTube.”

As well as the new consumer attention-grabbing HD video recording feature, the handset also has a forward-facing camera with video call capability that allows users to have face to face conversations using the handset — but only while they are connected to a Wi-Fi network.

“The forward-facing camera and FaceTime calling are nice developments, although of course it raises the question of network bandwidth availability and costs to the user — hence I’m not clear that it will necessarily be used by many,” said Dawson.

The developer said there were also psychological issues associated with the service — such as whether people would actually want to be seen during their calls, and the problem that video calls will require “near 100 percent” user focus, as opposed to voice calls, which can be carried on with only partial attention being paid by users.

“However, the forward facing camera does open up opportunities for new types of apps — no doubt we’ll see a flurry of apps which allow you do funny things with a photo of your own face, simply act as mirror (eg. for applying make-up, combing your hair), or superimpose things onto yourself, like virtual fashion dress-ups,” said Dawson.

Ultimately it’s hard to know just where the Apple developer community will take the device.

“Really I have to say, there are many capabilities of this device I think we’ll reach a point where developers will tend to specialise in bits and pieces they know better than others,” he said. “It’s difficult to know everything that is going in there — so many new APIs and so on that they putting in with each new year’s release.”