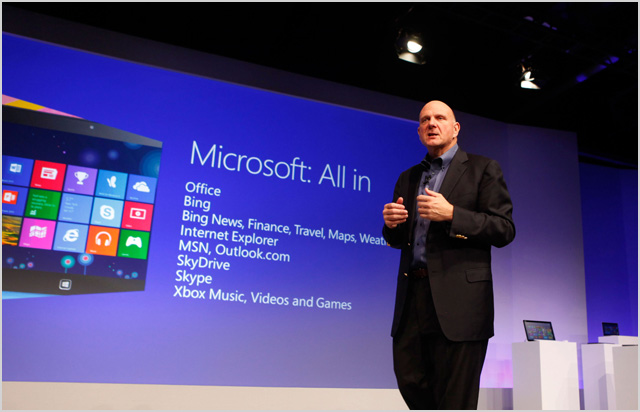 Update: Since this story broke, a number of readers have directed us to this Arstechnica story, which details the fact that Microsoft has changed its licensing terms around its OEM version of Windows for Windows 8, to make it quite legal for people to buy and use that version as a stand-alone full copy of Windows 8, including for purposes such as in virtual machines and for new custom-built machines without a bundled operating system. It appears as if this OEM version of Windows 8 is available from some online retailers in Australia such as Scorptec, but that it may not be available as a boxed version in all stores.

blog Microsoft’s latest operating system opus, Windows 8, launched in Sydney this morning in a glitzy, star-studded marketing launch packed full of information. Well, actually it was more packed with product demos where Redmond’s local managing director Pip Marlow raved about the new platforms’ Live Tiles functionality and how they could be personalised. Your writer couldn’t take it any more and left early. But I digress.

Because of this launch and the midnight festivities hosted by Harvey Norman, you’d think that you’d be able to waltz into a local retailer and pick up a full boxed copy of Windows 8 this morning. A statement in Microsoft’s Australian launch media release this morning appeared to confirm this. It stated: “At launch, Windows 8 Pro will be available for purchase as a Full Packed Product (off the shelf product).”

But, strange as this may sound, this isn’t the case yet — Microsoft is only selling upgrades so far. Gizmodo reports the following nugget, dug out of Marlow this morning (we recommend you click through for the full article):

“Want to buy a full version of Windows 8 to install on a new machine? You’re out of luck. Microsoft just confirmed at its Australian Windows 8 launch that the only offers on sale today are an upgrade for existing Windows machines to Windows 8 Pro.”

Now, of course Microsoft has been heading down this path for a long time. Those of us who build their own PCs will recall the struggle to buy full boxed copies of Windows XP when Microsoft stopped selling them. Virtually the only way you could buy a full legal copy of Windows XP, at various points, was through slightly dodgy ‘OEM’ copies that were supposed to be provided through Microsoft’s reseller network only with a new PC. But with the rules not being strictly enforced, you could usually get away with buying a new video card, for example, and getting a full OEM copy of Windows XP on the side. The situation got better with Windows 7, but it looks like Microsoft has reverted to form with Windows 8.

Of course, this isn’t an issue for large enterprises, which will have standardised agreements with Microsoft that allow them to download any version of Windows they want, and source licences online for the software. And it won’t be an issue for many, perhaps most, consumers and small businesses, who don’t always do in-place upgrades of the software running on their devices; many people simply buy new devices when they want to upgrade. It appears as though this is Microsoft’s preferred way for people to buy Windows 8 — through buying a new, touch-sensitive, Windows 8-capable device, with the new operating system already in place.

In addition, we’re hearing that Microsoft has relaxed the rules on OEM purchases of Windows 8 a little — so that if you’re building a new PC, you’ll pretty easily be able to buy a copy of the operating system to go with it. It’s not quite as dodgy a practice as it used to be.

But all of this does remind me a little of the difference between Microsoft and Apple. When Steve Jobs returned to Apple in 1997, he famously emphasised continually to the company’s staff that it was a products company — it designed, manufactured and sold products, and it needed to control every aspect of that ecosystem. Apple, it seems, learnt that lesson very well. But on launch morning, with no way for consumers to actually buy full copies of Microsoft’s new product from it, one does have to wonder whether Apple’s biggest and longest-term rival has yet to understand that concept.