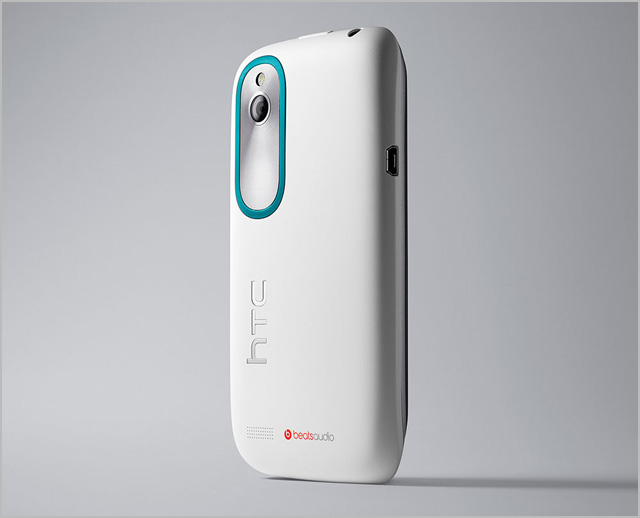 review On paper HTC’s new budget model looks like a winner, coming close to many of the specifications of its more expensive brethren but with a price point beneath $300. But does the lower-end Desire X do enough to keep HTC’s reputation for solid smartphone build quality and performance intact? Read on to find out.

Design
Over the past several years, Taiwanese consumer electronics giant HTC has evolved a definite design sense; its smartphones are recognisably part of the same family, and the Desire X, despite having a different naming lineage than the generally more powerful One Series models (the One X, XL, S and V), generally shares a great deal with them. The One V is an exception — but that particular model appeared to be more modelled after HTC’s previous Legend model.

So, when you’re looking at the Desire X, you get a similar plastic unibody exterior as is found on the One X, XL and S, and in the same white colour that we’ve seen before in the One X. You get the same on/off button on the top of the Desire X’s screen, the same 3.5mm headphone jack next to it, the same microUSB input on the side for synching and charging, and the same subtly inlaid Beats Audio speakers on the back and on the front above the screen, and capacitive touchscreen control buttons on the front below the screen. The Desire X’s camera is positioned a little off to the side, as is the logo on its back, but that’s more a stylistic choice than anything else. The Desire X weighs 114g, which is quite a bit lighter than higher-end models on the market.

All in all, the Desire X looks a great deal like the little brother or sister of the One X or XL, and this is a very good thing. We’ve been big fans of HTC’s design sense for some time, and the Desire X feels very much a part of that same lineage.

It’s also quite surprising. Typically when you buy a lower-end smartphone — the Desire X goes for $299, prepaid, through Optus — you expect to get models which have had less effort put into them; you expect lesser quality materials, lesser build quality, and a less comfortable feel in the hand. However, we really found it hard to fault the Desire X’s design; it’s every bit as good as the more expensive, higher-end models in HTC’s current range, and those models are very good indeed. The Desire X feels very nice in the hand; particularly if you have smaller hands which have trouble holding today’s 4.7″ or 4.8″ screens — and we think you’ll find this model quite deliciously curvaceous and svelte.

Features
As with its design, we were also impressed with the quality of the Desire X’s features; this might be a smartphone billed as a budget model, but many of its features are close to being on par with much higher-end models.

The Desire X’s CPU is a snappy dual-core model running at 1GHz, and it comes with 768MB of RAM and 4GB of storage space. Its screen is a 4″ super LCD model running at a resolution of 800×480, and its battery is a 1650mAh model. The back camera is a five megapixel model, and HTC has saved money here by not including a front-facing camera. The Desire X runs Android 4.0 (Ice Cream Sandwich) with version 4.0a of HTC’s Sense overlay. Sound is provided through HTC’s partnership with Beats Audio.

Now, at first glance all of this looks fairly mediocre compared with high end models such as the One X/XL, Samsung’s Galaxy S III and the Apple iPhone 5. You’re getting a five megapixel camera compared with an eight megapixel model, for example, a 4″ touchscreen at a lower resolution instead of a 4.7″ or 4.8″ model at a higher, ‘HD’ resolution; 3G speeds instead of 4G speeds and so on. But when you consider the fact that the Desire X costs less than half as much as those models, you start to look at things in a different light, as we’ll see shortly in the performance segment of this review. There’s more

Performance
Have you heard the term ‘return on investment’ or ‘ROI’? It basically means that you quantify and weigh up what you get for what you pay for, when making a decision. We hope this is a fairly straightforward concept, because we’ll be using it a fair bit here. When examining the Desire X’s performance across a range of areas, we came to the conclusion that this is one smartphone which offers an excellent ROI.

Consider this choice, for example. Do you want the absolute best possible camera on your mainstream smartphone? If so, you probably want the Apple iPhone 5, or the Samsung Galaxy S III, or the HTC One X/XL. But if you’re happy to settle for a smartphone with a camera that’s probably 90 percent as good, then the Desire X offers that for less than half the price.

And the same can be said across virtually every area of the Desire X’s performance. In terms of its camera, battery life, system performance and responsiveness, touchscreen quality, up to date software and other areas, the Desire X consistently performs very well, delivering all the performance you need from a day to day smartphone usage perspective.

For example, we found that the Desire X would easily last through a full day of normal light to moderate use, and even be usable for much of the next day before needing an emergency recharge. You can also leave it on your desk for the better part of a week before it will eventually expire. It took very solid photos, which we had trouble differentiating from the photos taken with our higher-spec One XL model, until we got really close up and examined them in detail.

The user interface responsiveness of the Desire X was also solid (due to its speedy 1GHz dual-core processor), and we quite liked the quality of its touchscreen; the low 800×480 resolution wasn’t a huge issue, compared with the higher resolutions available through more expensive models.

All in all, we were very pleased with the Desire X’s performance. It didn’t blow us away, but it didn’t disappoint us either. In every field (except its lack of 4G support), the Desire X performed more than solidly and reminded us of higher-end models during its testing.

Conclusion
Your writer currently uses a HTC One XL personally, which is the highest-end HTC model currently available in Australia and a phone which is comparable to other high-end models from Apple and Samsung. And yet, when it comes down to it, when I was testing the Desire X this week, I was consistently left with the feeling that I wouldn’t mind at all using this lower-end model full-time. It met almost all of my needs for a smartphone in late 2012, apart from its lack of support for 4G speeds, and did so in an extremely competent way.

The release of the Desire X forces smartphone buyers in late 2012 into a somewhat uncomfortable position. It begs the question: Do you really need to pay a premium for a smartphone which will deliver you the absolute best performance on the market? Or would you be happy to settle for a model 90 percent as good, for half the price? Personally I’m an early adopter, so I know which option I’ll be choosing; I want the best, and I’m prepared to pay for it. But I also suspect that more of the Australian population might strongly consider taking the other path; and for those that do, the Desire X represents an excellent option.

HTC’s Desire X is a low to medium-end smartphone at a bargain basement price which has the chops to challenge the big guns; it clearly punches above its weight. If you’re at all budget-conscious when smartphone shopping, we recommend you take a long look at this extremely solid little model. It’s a worthy contender for your dollar.

Other reviews of the HTC Desire X we liked: PCWorld Australia, Gizmodo Australia.