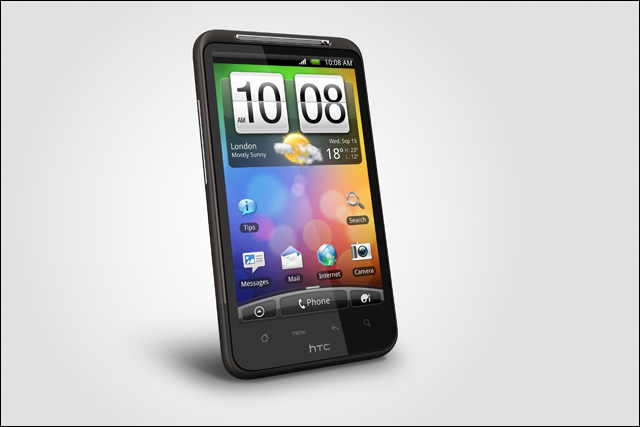 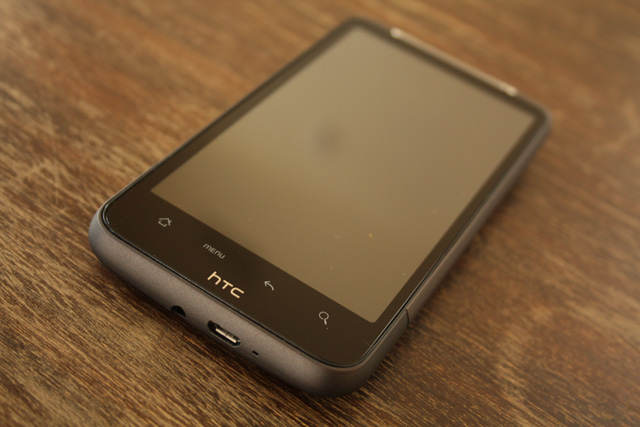 review The Desire HD is Taiwanese corporation HTC’s current top dog, and it shows. With a screen size that’s out of this world, gorgeous graphics, large speakers and a fast CPU, this is a mobile phone which has some serious props. But in a market which is about to be saturated with similar devices from HTC’s rivals Samsung, Sony Ericsson, LG and Motorola, can the Desire HD continue to hold its own?

The HTC Desire HD is available in Australia exclusively through Vodafone.

Design
With its 4.3” capacitive touchscreen running at a resolution of 480×800, the Desire HD feels in the hand like a mobile phone that has dreams of being a small tablet. Its display is bigger than that of the
original Desire (at 3.7”) and the iPhone 4 (at 3.5”). Your writer has large hands, but it’s a little difficult to hold the phone flat in one hand without stretching the tendons a bit.

As the phone faces you, above the screen is a horizontal speaker grill line, which — like the screen — is larger than we have seen on other phones. Undoubtedly it helps contribute to the HD’s stellar audio
quality. The phone boasts Dolby Mobile and SRS virtual surround sound.

On the bottom of the screen are the usual four standard buttons which most phones based on Google’s Android operating system use — home, menu, return and search. However, unlike the physical buttons on the original Desire, the Desire HD’s buttons are touch-sensitive. You don’t press them in — you just touch them. It’s an effect we’ve grown to love while testing the handset, and we’d find it hard to go back to physical buttons now.

On the left-hand side of the phone are volume buttons, which emit cute ‘pink, ponk’ sounds when pressed, and on the top is the standard on/off/sleep button. There is nothing at all on the phone’s right-hand side, and on the bottom the options are similarly minimised — just a 3.5mm audio jack and a micro-USB port for charging and connecting the phone to a PC.

On the back of the phone you can find its (very large) camera and flash, as well as another audio grill. This area is also where we fell in love with the Desire HD’s case. The aluminium unibody, combined with plastic inserts which allow access to the SIM card, MicroSD and battery slots, is just fantastic on the fingers and — wonder of wonders — doesn’t hold fingerprints. It also grips fairly well, meaning that it will likely be hard to drop the device. And the actual material looks quite futuristic — part metal, part plastic, and all class.

Overall the Desire HD’s design is stellar, although a bit big for small hands.

Features
If you can name the features that you want in a high-end Android handset, odds are the Desire HD has them.

The phone comes with version 2.2 of the Android operating system (Froyo), although we’re sure it wouldn’t be too hard to upgrade it to 2.3 (Gingerbread), and the 1GHz Qualcomm CPU can definitely handle any current or future needs. The device has 768MB of RAM and 1.5GB of flash storage on-board. In addition, you can add a microSD card with up to 32GB of storage to help you cart around your complete music library.

The included camera is a 8 megapixel monster with dual LED flash and autofocus, and the Desire HD will happily interface with the network of your choice, with support for all of Australia’s popular mobile
phone networks; although the phone exclusively sells in Australia through Vodafone (which doesn’t have the greatest network performance in the world), you can get an unlocked version through online retailers like Mobicity and use with your Telstra or Optus SIM. Then there’s a heap of extras … a FM radio tuner, A-GPS support and so on — and all of this is packed into a package which weighs just 164 grams. Pretty phenomenal stuff.

Increasingly, mobile phones are becoming like laptops. Many are based on the same CPU or similar CPUs or chipsets, but the vendors can innovate through little things like better sound, innovative form factors, larger and brighter screens and so on. When seen in this light, most of HTC’s current models, including the Desire HD, are up to the fundamental spec the modern smartphone user needs. But the Desire HD just seems to kick things up a notch higher.

Performance
If you really want to see the power of Google’s Android platform in action, pick up a Desire HD and spend some time with it. You probably won’t want to go back to Apple’s iOS afterwards.

The Desire HD is one of the first Android phones we’ve seen where the power of the phone’s hardware matches the power of its software. Menus snap into place, everything you click loads instantly, swiping has satisfying little bouncing animations that don’t lose frames even when the constantly moving and changing HTC desktop background is shifting around simultaneously. This is how Android ought to be.

Video played online and from the device itself played fine without any delays or jittering, and we watched half an hour of a StarCraft II match on YouTube before we realised we had gotten that far into it. This is truly a screen which you can consume some serious multimedia on.

One area which should be particularly singled out for praise is the Desire HD’s camera. A lot has been said about the iPhone 4’s stellar photography capabilities, but the Desire HD would definitely give the Apple camp a run for its money — the handset is great for taking both stills as well as 720p videos.

However, as with all products, there were some caveats to the Desire HD’s performance.

For starters, we found it a little weird when watching video that much of the audio seemed to be directed away from the viewer, emanating out of the Desire HD’s rear speaker instead of the front one. We’re not sure if this was just the fault of the videos we were watching (standard YouTube, mainly), but much of the audio seemed to end up being directed in the opposite direction to our ears.

Secondly, the Desire HD’s battery life is not spectacular. We tended to pick it up and tinker with it for a while, then leave it on our desk for half a day or so, then tinker some more — and even this
light use left the handset beeping for a power refresh after only a couple of days. We don’t need to charge our current main handset, an iPhone 4, more than once or sometimes twice a week, if we’re using it heavily, but it’s easy to envisage a situation where the Desire HD would need to be charged almost every day.

Most Android handset vendors like to customise their software interface a little for the end user, and HTC is no exception to this rule, with its Sense interface dominating the experience for the end
user on its Desire range. In addition, the company has implemented an online service — HTCSense.com — which allows users to back up their data online, make the phone ring if it’s lost, or even erase data remotely if they believe it has been stolen.

While many of these features are fantastic additions to the Android experience, seeing them as vendor-specific add-ons smacks a bit of lock-in to us. We’d like to see them become more generic Android features through Google, so that customers don’t lose software functionality when sticking with the Android platform but changing phone hardware vendors.

Conclusion
There is no doubt that the HTC Desire HD is about to face some stiff competition in the Australian market for smartphones. The Sony Ericsson Xperia Arc, the Motorola Atrix and the Samsung Galaxy S II are all expected to hit Australia shortly, and Apple’s iPhone 4 is also believed to have been selling well since it launched locally in mid-2010.

However, there is no doubt that the Desire HD has a featureset and design which makes it a strong competitor to all of these high-end handsets. And to boot, it’s been available for some time already in
Australia; the possibility exists that its price will come down a little when the competition gets fierce.

With its powerful CPU, massive screen size, top-end amount of RAM and a major manufacturer behind it, the Desire HD is a future-proof phone. As Android marches on, expect to see its functionality extended through software upgrades. If you can stand the battery life and have big enough hands, this is a handset worth investing in. The HTC Desire HD is available in Australia exclusively through Vodafone.