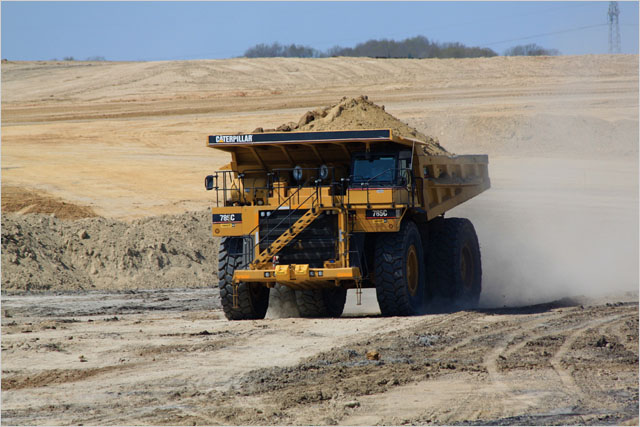 news Microsoft this week revealed that it had beaten fellow technology behemoth SAP to a major enterprise resource planning deal with Australian industrial dealership Hastings Deering, in a move which will see Redmond’s Dynamics AX 2012 software entrenched at the company.

Hastings Deering is a major dealer network covering the Caterpillar brand of industrial machinery. It has 23 branches, 26 sub-branches and some 4,200 employees, holding exclusive Caterpillar distribution rights for the sale and rental of Caterpillar heavy equipment, parts and service support in Queensland, Northern Territory, Papua New Guinea, New Caledonia and the Solomon Islands. The company sells, services, rents and supports the complete range of Caterpillar machinery.

In a statement issued by Microsoft this week, the company said Hastings Deering was expecting substantial growth in the next 18 months as it pushes towards its goal of becoming a three billion dollar business. It also expects to double its workforce over the next two to three years. However, its existing business system only covered 40 percent of its processes and was supported by a number of additional applications. As a result, it started looking for a new platform to allow it to scale.

“The choice of Microsoft Dynamics AX 2012 is part of a comprehensive strategic vision for our company, which sees Microsoft as a key partner for stability, trust and innovation,” said John Birch, CIO at Hastings Deering, in Microsoft’s statement. “We counted on our Business Project Teams to find a unified solution that was innovative and easy for our employees to use. The solution needed to transform IT into a genuine asset for our company, as a way of managing equipment sale and rentals, parts sales, inventory and workshop services; as well as the specifics related to all of our lines of business.”

Microsoft noted that German giant SAP – whose software is more well-known than Microsoft’s in the ERP market – had also been in contention for the deal.`

The performance, scalability, ease of maintenance and the wealth of functionality in Microsoft Dynamics AX 2012 led to it being selected over SAP after an extensive search by the company, Microsoft said. Central to this capability is Xapt Corporation, a specialist Dynamics partner who will provide Caterpillar-specific Dynamics modules and heavy equipment domain knowledge. Microsoft’s Consulting Services Division will provide implementation services and partner with Hasting Deering as they take a ‘phased approach’ in rolling out the new system, which is expected to be completed in the next 28 months and will support 10,000 users.

“Our ERP system runs the processes that the entire company uses every day. It’s our life blood – we depend on it,” said Birch. “Microsoft Dynamics AX 2012 will empower our employees to be more productive while enabling us to derive the insights necessary to respond quickly in an ever-changing world of business.”

The original version of the software that would eventually become Dynamics AX was first developed through the 1980’s and 90’s, before Microsoft acquired the parent company manufacturing it in 2002. It was re-badged Dynamics AX in the mid-2000’s, to sit along the rest of Microsoft’s Dynamics line (which also includes CRM and business intelligence applications, for example). Microsoft released Dynamics 2012 in February 2012 and is planning an R2 version in the fourth quarter of 2012.

The news comes as Microsoft has recently signed up a number of Australian customers to its Dynamics platform. In June, for example, it announced that its Dynamics CRM solution had beaten rival platform Salesforce.com to work at local conferencing services provider Redback Conferencing. It also picked up a similar deal with energy retailer Australian Power & Gas, and other local Dynamics CRM customers include Curtin University Coffs Harbour City Council, Tim Davies Landscaping, Capital Transport and Relationships Australia.

opinion/analysis
Microsoft already owns the enterprise IT software market in the server software, collaboration, file serving and identity management areas, and it can make a strong claim to the database segment as well, or at least the more lightweight sections of it. Now it’s going after ERP, CRM, business intelligence, virtualisation, unified communications, and well, everything else. Microsoft wants to eat the lunch of companies like Oracle and SAP (not to mention VMware), and from where I’m sitting, it looks like Redmond is making pretty good mileage on that journey. It will be interesting to see if Dynamics can continue its string of wins in Australia. Microsoft hasn’t precisely been dominant in the ERP space previously. If the company can continue taking work off the big guns in this sector, I would say we’ll have a decent war going on in this area for the next decade or more.

IT managers and CIOs like buying Microsoft at the moment, and Microsoft wants to sell them everything it can. One company, all the software you need, and a bunch of local system integrators to support it. It’s a good time to be a Microsoft partner. Whether Dynamics AX is actually a solid platform – well, that’s beyond my knowledge to say at this point ;)