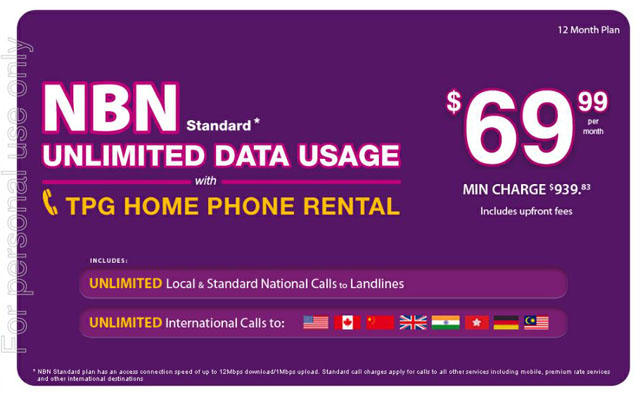 opinion The $69.99 unlimited plan revealed by cut-rate ISP TPG yesterday shows what the future of broadband plans on the National Broadband Network will look like, and it’s not good news for premium ISPs such as Telstra, Optus and iiNet.

Right now, Australia’s cadre of major telecommunications companies are doubtless holding repeated internal meetings as they try and determine just how their pricing models, both external to customers and internal financial modelling for their own profitability, will need to be modified under the drastically changed telecommunications regime being swept into place by Labor’s flagship National Broadband Network project. The conversations are probably going a little like this:

At Telstra, the company’s executives are probably focused on two main objectives. The first is the need to retain customers under the NBN. There are millions of Australians who have been locked into Telstra’s services for decades now by default, and Telstra wants to make sure it doesn’t lose these customers as the once-in-several-generations NBN migration kicks off. The second objective is all about profit and locking those customers in future — bundling as many services together as possible, from mobile to pay TV to broadband to home phone lines to PVR boxes in the loungeroom — so that Telstra can charge each household one colossal monthly fee.

At Optus, the conversation is looking fairly similar, but as always with Optus, it’s a watered down version of the Telstra conversation. Despite the fact that it has let smaller, more nimble rivals such as iiNet take up its challenger mantle in fixed line broadband over the past decade, Optus still likes to think it’s Telstra. Consequently, in the NBN world, Optus wants to retain its existing customers and force-feed them mobile bundles, pay TV and other services.

Over at iiNet, the conversation is a little bit more humane. Don Malone and his youthful team are kind of like the vampire Spike from Buffy the Vampire Slayer — evil, but oh-so-lovable. Under its shiny Generation Y exterior, iiNet is still the same kind of profit-focused dastardly corporation as Telstra and Optus. You can see this vividly demonstrated in the rapacious way the iiBorg has assimilated rival after rival over the years — from AAPT to Netspace, from TransACT to Internode. But like Spike, iiNet’s such a cute, friendly kind of evil that you can’t help loving it, and so under the NBN it broadly wants to continue doing what it’s been doing for the past two decades already — giving customers decent products and services at a premium price, while screwing Telstra as much as it can under the table and buying up scale.

Now, if you were a fly on the wall in these meetings, no doubt you would believe that the rollout of the NBN isn’t going to fundamentally change many of the dynamics of Australia’s telecommunications industry. The Big Bad, Telstra, will continue along its merry evil path towards national dominance, the Little Bad, Optus, will continue to try to do the same in its own usually inept way, and the Good, iiNet, will continue to challenge both.

But what if all three are wrong?

Yesterday Australia’s fourth major ISP, TPG, gave the first indication of what its own internal National Broadband Network conversation looks like. And it’s a simple message. Unlimited downloads per month. Unlimited local and national calls. Unlimited international calls to some countries. All for just $69.99 per month. The only catch? Your NBN speed will be limited to 12Mbps — close to current ADSL speeds.

Now at a cursory glance, it’s easy to look at TPG’s first NBN plan and be pretty blasé about it — after all, it looks basically like the company has just taken its existing ADSL pricing infrastructure and ported it into an NBN world – a not dissimilar approach from the ones taken by Telstra, Optus and iiNet already. Plus, the 12Mbps speeds are not very attractive. This was initially my view of the situation yesterday.

But considering TPG’s first NBN effort in a bit more detail overnight, I came to the conclusion that it was actually something far more significant than that. It’s the first step in a slippery slope of price cutting in an NBN world which will result in significantly cheaper broadband services.

But in the NBN world, so many of these factors disappear. The reliability and latency of Australia’s brand new National Broadband Network constitutes a step change in technology from the previous generation of ADSL and HFC cable networks. Changing providers will be a matter of minutes. Broadband downtime will be almost eliminated. The opening up of mobile networks such as Optus’ 4G infrastructure to wholesale access means every telco will be bundling. And every type of content will be available through every broadband connection over the Internet.

When broadband becomes as reliable as electricity, what we’re left with, is a telecommunications environment where price becomes the only differentiating factor between ISPs. And TPG’s release of its first unlimited NBN plan yesterday represents the first shot fired in that war. In June this year, I wrote:

“… in an NBN world, where the underlying broadband infrastructure will be so much more reliable and so much faster and more responsive, there will be no need for customers to pay the premiums which ISPs like Telstra, Optus and iiNet currently enjoy, when basic broadband access is already so fantastic. And with the world of content suddenly at their virtual doorstep, there will be very little need for that content to be piped into Australia with a big fat extra profit margin slapped on top by local ISPs.”

“If I think about the world of the NBN, I think about signing up with TPG or Dodo for a 100Mbps plan that will probably offer me a terabyte of quota for something like $50 to $60 a month. Because when the fibre cable running to my premise will be so fantastic, there will be no more need to keep paying top-tier ISPs insurance money to ensure a steady service or for value-added products; that reliability will just come built-in, and the best value-added broadband products will come from global suppliers.”

There is also significant evidence that what TPG is offering is just what customers are looking for. Yesterday, fuelled by thousands upon thousands of people looking for information on TPG’s new NBN plan, Delimiter had one of its biggest traffic days on record, a situation we didn’t experience when Telstra, Optus, iiNet or anyone else released their NBN plans.

And it’s a little-remembered fact that TPG is the only one of Australia’s major ISPs to have predominantly grown its customer base through organic customer demand for its products. TPG didn’t inherit its customers by virtue of being a former monopoly telco, as Telstra did, it didn’t win its customers when it was the only second telco in the market, as Optus did, and it didn’t buy its customers through acquisitions as iiNet did.

No, TPG signed up most of its current customers by blanketing Australia with marketing campaigns for its cut-rate broadband products. Customers deserted higher-priced telcos in their hundreds of thousands to migrate into its arms. And now TPG is going to follow exactly the same strategy under the NBN, but with most of its weaknesses (lesser customer service, content and bundling options) removed from the equation due to the NBN’s inherent technical advantages and the willingness of mobile telcos and content providers to share their assets.

The Good and the Big and Little Bads should watch out. Because when it comes to NBN ISP choices, things are about to get Ugly.