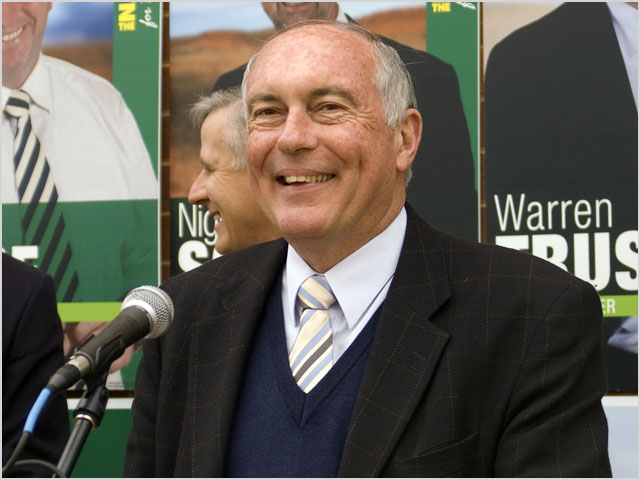 news The Federal Leader of the Nationals, Warren Truss, has again made a number of major factually incorrect public statements with respect to Labor’s National Broadband Network project, in an extended interview on the topic riddled with mis-statements about the project and his own party’s rival policies.

Last week, Communications Minister Stephen Conroy and Prime Minister Julia Gillard attended an event in Townsville in North Queensland where the pair announced a major NBN satellite contract and highlighted details of the NBN’s rollout in areas such as Townsville, Mackay and Rockhampton. Truss, whose own electorate of Wide Bay is in Queensland, appeared on Channel Ten’s Meet the Press program over the weekend, and fielded several questions regarding Coalition policy with regard to the NBN and broadband access in general.

In one answer, Truss referred to the previous Howard Government’s OPEL contract signed in November 2007. The project, as part of a deal signed between Optus, Elders and the Government, was to have seen a combination of WiMax, ADSL2+ and fibre backbone infrastructure deployed to rural areas to fix broadband blackspots. However, the project, unlike the NBN, did not include a satellite component, with the Howard Government instead preferring a separate subsidy approach to rural satellite provision, which saw regional Australians directly provided with funds to offset the costs of buying satellite services from existing providers.

However, Truss erroneously claimed the project did contain a satellite component.

“Had the Coalition been elected in 2007, those satellite services would already be in place, the wireless services would already be in place under the Optus contract,” Truss told the Meet the Press interviewers. “So we had committed to provide those services — they would have been in place … we were very much a part of putting in place the Optus contract, which would have delivered, and would have delivered by now, wireless and satellite services to people who live in regional Australia,” Truss added.

Truss’s inaccurate claim is not the first time a member of the Coalition had claimed that the OPEL contract — cancelled by Minister Conroy after the then-Rudd Government took power in November 2007 — contained a satellite component. Earlier this year, the Coalition’s regional telecommunications spokesperson Luke Hartsuyker issued a brief media release, stating: “The OPEL contract included a mixture of technologies, including satellite.”

Truss’s comments also contained a number of other inaccuracies. For example, Truss erroneously claimed that Prime Minister Gillard had rolled back support for fibre to the home infrastructure in “the suburbs of large provincial cities like Townsville and Rockhampton and Mackay,” which were, he said, “now only going to get wireless”. “She had promised them that they were to get fibre optic cable to the home,” Truss added.

However, in fact, Townsville is one of the first release sites for the NBN fibre in Australia, with a number of residents already connected to the infrastructure and the majority of the city scheduled to receive the NBN’s fibre over the next few years, according to NBN Co’s coverage maps. Mackay and Rockhampton are also slated to be broadly covered with fibre under the NBN, over the next three years.

Truss also made several other inaccurate statements with respect to the NBN. “So in reality, Labor’s promise to provide fibre optic services to 95% of the Australian population is in tatters,” he said. “The NBN is way behind schedule, it’s way ahead of cost, and it’s not going to deliver fibre optic services to anything like the number of Australians which Labor promised.” In fact, Labor’s NBN policy will see 93 percent of Australia covered with fibre, not 95 percent, and there is currently no reason to believe, unless the Coalition wins a Federal Election and changes national telecommunications policy, that the rollout will not eventually reach its goals.

Several aspects of Truss’s claims are unclear. While NBN Co has acknowledged that its rollout is behind schedule due to factors such as the company’s complex negotiations with Telstra, it is yet unclear whether the project has blown out in terms of its cost.

Truss refused to directly answer a repeated question from Meet the Press interviewers on whether the Coalition would stick with the NBN plan.

In an interview with the Sydney Morning Herald several weeks ago, Turnbull stated that a Coalition Government would proceed with the NBN project. “No, the Coalition will not cancel or roll back the NBN,” he said. “The NBN will continue to roll out but we will do so in a cost-effective manner in particular in built-up areas.” The comments echo comments Turnbull made earlier last month, when the Liberal MP publicly gave what he described as a “solemn undertaking” to the Australian people that a Coalition Government would “complete the job of NBN Co”, instead of ripping up the network or abandoning Labor’s NBN policy altogether.

Truss said the Coalition supported wireless and satellite services for regional communities, and “of course we won’t be tearing out existing infrastructure”, he said. “We remain committed to providing the highest standard of broadband services to people who live in regional Australia. And that will remain our commitment upon election to office.”

Coalition telecommunications policy broadly focuses on fibre to the node-style broadband, which only requires rolling out fibre to neighbourhood cabinets and using Telstra’s copper network for the rest of the distance to residences and business premises. In addition, it also focuses on continuing to use the HFC cable networks operated by Telstra and Optus, separating Telstra’s wholesale and retail operations, and using technologies such as wireless and satellite to cover regional areas of Australia.

History of misleading comments
The comments by Truss over the weekend represent the third time in six months that the Nationals Leader has made major factually inaccurate statements regarding the NBN.

In May, Truss was quoted in an article published in the Noosa News stating that not a single person in the Wide Bay electorate or Noosa areas would be able to connect to the NBN until at least the latter part of this decade. “The people of Wide Bay bear their share of the liability for the NBN, but no one is getting any benefits,” he said. The comments by the Nationals Leader echo — word for word — a media release he issued in March this year, in which he alleged that the NBN had proven to be “nothing but a cruel hoax” and a “monumental debacle”.

However, Truss was factually incorrect in his statement that no residents in the Wide Bay electorate will receive access to the NBN before the later years of this decade.

Truss’s about the NBN represent only the latest time which a high-profile member of the Coalition has made a factually inaccurate claim about the project over the past several years.

In June, for example, Shadow Treasurer Joe Hockey inaccurately claimed that 4G mobile broadband had the potential to be “far superior” to the fibre technology of the NBN. In mid-May, Opposition Leader Tony Abbott misrepresented the cost of connecting to the NBN, in comments which the Government claimed represented a deliberate attempt to mislead the Australian public on the issue. Shadow Communications Minister Malcolm Turnbull similarly made a number of factually incorrect statements on the NBN throughout March, and in January Abbott got quite a few facts about the NBN wrong in a radio interview.

In addition, over the past several years, there have been a number of misleading articles published by various local newspapers about the NBN. In December, the Australian Press Council expressed concern about the Daily Telegraph’s coverage of the Federal Government’s National Broadband Network project, backing a local critic’s complaint that three articles in a short period of time had contained “inaccurate or misleading assertions” about the NBN. Similarly, in March this year, another News Ltd publication, The Australian, published a correction to a story after it inaccurately alleged that a school in South Australia would have to pay $200,000 to connect to the NBN; in fact, the school will receive NBN access as part of the normal rollout.

In a statement issued this afternoon, Communications Minister Stephen Conroy said Truss should “stop misleading the Australian people when it comes to the NBN”. Truss’s office has not yet responded to a request for comment on the issue.

opinion/analysis
I would like to see someone (perhaps Labor) initiate legal action in order to stop senior Coalition figures from making blatantly inaccurate statements with respect to the NBN. It doesn’t get much more black and white than this. Truss is claiming that fibre isn’t being rolled out in some cities in Queensland, when residents in those cities are already receiving services over the fibre, and also claiming that the OPEL policy included a satellite component, when in fact it did not.

What needs to be done to stop these politicians blatantly misleading the Australian public on the NBN? Legal action? Parliamentary censure? A report published by an independent adjudicator such as the Australian Competition and Consumer Commission? I don’t know. But something needs to be done. If you are a CEO or another major public figure such as a sportsperson, you can’t get away with blatantly misleading the Australian public. Why is it that these politicians can get away with it, with no consequences?