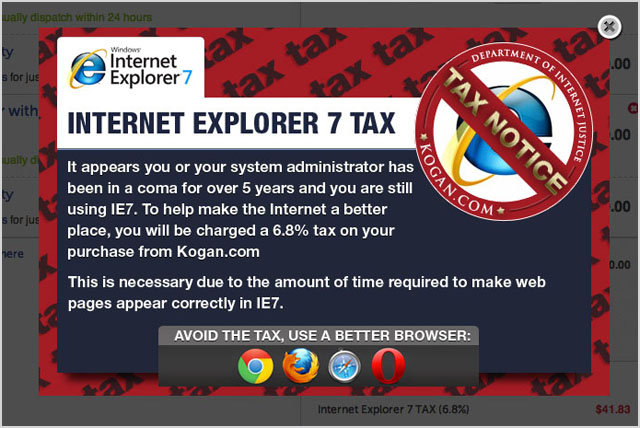 news Australian consumer electronics upstart Kogan Technologies has deployed a special “tax” on its popular website which will charge online shoppers an extra 6.8 percent on top of their purchases if they persist in using what the company described as Microsoft’s “antique” Internet Explorer web browser.

“The way we’ve been able to keep our prices so low is by using technology to make our business efficient and streamlined,” Kogan wrote on its company blog yesterday. “One of the things stopping that is our web team having to spend a lot of time making our new website look normal on IE7. This is an extremely old browser, so from today, anyone buying from the site who uses IE7 will be lumped with a 6.8% surcharge – that’s 0.1% for each month IE7 has been on the market.”

“It’s not only costing us a huge amount, it’s affecting any business with an online presence, and costing the Internet economy millions,” the company claimed. “Customers who enter our site using Internet Explorer 7 can avoid the impost by simply downloading an up-to-date browser such as Google Chrome, Mozilla Firefox, Safari, Opera or even a more recent version of Internet Explorer.”
Kogan wrote that all “Internet citizens” had a responsibility to make the Internet a better place.

“By taking these measures, we are doing our bit,” the company added. “This will help us increase our efficiency, help keep prices for all smart shoppers down, and hopefully help eradicate the world of the pain in the rear that is IE7! So, what are you waiting for? Time to upgrade your browser!”

Kogan’s approach to Internet Explorer 7 has garnered it positive responses from readers of its blog. “Kogan you ROCK hahaha this is the best thing ever. Brilliant!” wrote one reader. “If anyone is still using Internet Explorer (let alone IE7) they should be taxed more than double this,” wrote another. “Well done Kogan.” And another wrote: “Best thing ever!!!! Love the initiative! Hopefully this is the start of a revolution for better technology and action to weed out ancient technology :)”

However, not everybody was as positive about Kogan’s move. One reader described it as “A waste of time that would have been better spent creating a mobile optimised site.” In addition, others highlighted the fact that not all shoppers could choose which browser they would use to access the Kogan site.

The Department of Defence and the Commonwealth Bank, for example, have only recently upgraded the browsers on tens of thousands of their desktop machines to IE7, from IE6. And many other organisations around Australia do not allow their users to install alternative browsers such as Firefox and Chrome.

opinion/analysis
Maverick Australian consumer electronics upstart Ruslan Kogan is no stranger to controversy, and indeed actively courts it. Remember the time Kogan applied — and was knocked back — for a job at McDonald’s? Or the “spams & scams” portal protector? Or the Kogan ads satirising Harvey Norman founder Gerry Harvey? Or the time Kogan claimed rival retailers like JB Hi-Fi were “Apple’s bitch”? Yup. When it comes to publicity stunts, Kogan has got them in spades.

The entrepreneur’s latest stunt this morning is another publicity stunt and should be viewed as such. Is it really costing Kogan — a tiny organisation with only a few dozen staff — much money to keep its small number of websites compatible with IE7? I don’t think so. IE7 isn’t exactly the most ancient of browsers, and I don’t think it would be a big deal for anyone to keep a couple of websites up to date for it. IE6 might be a different matter, but IE7 was a major leap forward in terms of web compatibility.

Kogan’s stunt this week is calculated to achieve his company press headlines around the world over the next week on this issue, and doubtless it will succeed. Another victory for public relations. Personally, I’d rather see Kogan concentrate on manufacturing some really innovative and quality products, rather than constantly focusing on getting his name in the media. But then, I’m not sure to what extent this will be an issue for the company.

Given its increasing third-party product range, I wonder whether Kogan is becoming more of an online retailer these days, rather than a company focused on its product creation and manufacturing operations. We’ve requested a review unit of Kogan’s new Ice Cream Sandwich tablet. It will be interesting to see how much progress the company has made.