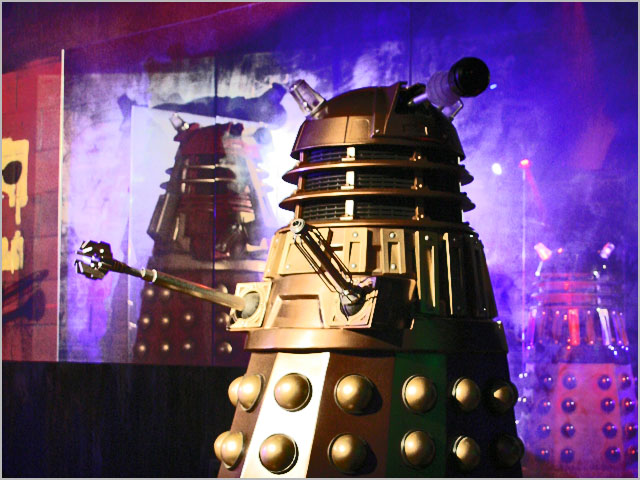 opinion The Federal Government should ignore the pathetic demands of the film and TV industry for new legislation to “exterminate” Internet piracy and instead wait for the sector to fix the blatantly obvious problems with its commercial model, following its latest loss in Australia’s High Court. Australia’s copyright law works well as it stands, and does not need changing.

If there is one thing which Australia has learnt by now about the Australian Federation Against Copyright Theft, it is that, like the Daleks of the classic Dr Who television series, the organisation and the coalition of global and local film and TV studios which back it simply never gives up.

AFACT has now suffered no less than three defeats in Australia’s courts system in as many years in its high-profile case against Internet service provider iiNet. After its initial case was filed against iiNet in November 2008, the Federal Court first knocked back AFACT’s claim that iiNet was authorising the infringement of copyright through letting its users use the BitTorrent file-sharing platform in February 2010. Not satisfied with that result, AFACT appealed, and was knocked back again twelve months later. AFACT subsequently appealed again, and on Friday last week, the organisation lost yet again, with the High Court — the last court of appeal — denying AFACT any avenue of future legal recourse against iiNet. That’s right: Every year, for the past three years, Australia’s courts have found that AFACT’s pursuit of its case against iiNet is illegitimate. It’s beginning to be an annual tradition.

And yet, like the Daleks (who also tend to appear at least once a year, sometimes in the December Christmas special), AFACT just keeps on coming, in its fruitless quest to ‘exterminate’ file sharing at any cost. One gets the feeling that, like the Daleks, AFACT could survive almost any catastrophe with its mission intact. No matter how many times The Doctor blows up, dismantles or re-orients the Daleks, they never completely disappear from the picture, and repeatedly re-appear to challenge the Earth one more time and destroy all human life as they know it.

One can’t help but imagine that AFACT could similarly suffer any number of court losses and never give up. Every single time it loses, the organisation’s executive director Neil Gane appears for a public press conference, dogmatically repeating the same messages. “EXTERMINATE!” he screeches for the TV cameras. “INTERNET PIRACY MUST BE EXTERMINATED!”

Now the weakness of the Daleks has always been that they are highly single-minded, and thus fairly predictable. They accept no compromises and do not wish to co-exist with other species, preferring instead to eradicate them. Thus, it came as no surprise that (as several pundits predicted — here and here — following the verdict last week), the similarly single-minded AFACT did not accept its third legal defeat in as many years, but immediately flagged its intention to appeal to a higher power: The Federal Government. However, just as The Doctor continually rejects the Dalek’s single-minded approach, there are a number of reasons why Australia’s Government should reject AFACT’s call for legislative redress for its problems.

Firstly, the Government must take into account the fact that Australia’s copyright regime is currently functioning well for other industries.

The music industry, which had historically taken a similarly litigious view of Internet piracy as the film and TV studios, backed away from the issue after it became clear that consumers preferred convenient legal download options such as Apple’s iTunes. Version 2.0 of the legal online music paradigm is now entering Australia with the launch of music streaming services such as Spotify and Rdio. The games industry has similarly worked within existing copyright law to transition its business model towards legal online downloads through platforms such as Valve’s Steam, Microsoft’s Xbox Live, Sony’s PlayStation On Demand and more. Video game piracy doesn’t appear to be a major problem in Australia at the moment, with the overwhelming majority of customers preferring legal options instead of illegal ones.

And lastly, even the book industry, which also produces a wide range of content, has also resolved most of its digital issues, with platforms such as Amazon’s Kindle store and Apple’s iBooks providing lucrative ways for authors to make returns on their content generating investment without resorting to enforcement action on ISPs.

The film and TV studios appear to be the only segment of the broader content industry which has been unable to transition to a new digital reality within Australia’s current copyright regime. If the Federal Government changes Australia’s copyright law to introduce some kind of mandatory industry protocol between ISPs and film and TV studios on the issue of Internet piracy, it has to face up to the fact that it may unlock Pandora’s box and destabilise the very strong progress which has been made on other fronts in monetising the digital environment.

In short, it appears apparent, given the experiences of other related industries, that the Internet piracy issues being experienced by the film and TV studios are problems of their own making — because they have not transitioned to a new digital model — rather than the sort of systemic legislative issue which would need to be addressed centrally by the Government.

Secondly, there is the problem of the rights holders’ intractability on the issue. The Daleks have never accepted any compromise when it comes to the extermination of the human race, and content owners have similarly demonstrated over the past year a lack of willingness to seriously sit down and negotiate with respect to their problems.

The Government (in the form of the Attorney-General’s Department) has already been holding talks between the ISP and content industries on the issue of online copyright infringement; talks involving AFACT and other content industry groups, and iiNet and other ISP industry groups. As iiNet regulatory chief Steve Dalby said publicly several weeks ago, the talks have been going nowhere, with the two sides locked rigidly on opposite sides of the online copyright infringement fence and unwilling to meet each other in the middle. “The rights holders want all the benefits of remedial action, but want the ISPs to foot the bill,” he said. “ISPs don’t want to pay to protect the rights of third parties. The gap between the parties is considerable and unlikely to close.”

However, although Dalby has characterised the talks as being between two sides, neither of which wants to give any ground, this portrayal is actually inaccurate.

The truth is that Australia’s ISP industry has shown itself quite willing to compromise on the issue of online copyright infringement. In November last year, the ISPs proposed an anti-piracy education and warning scheme which would see allegedly infringing customers issued with education notices, leading eventually to a so-called ‘discovery’ notice which would allow rights holders to eventually pursue individual customers themselves through the courts. However, at the time, the Australian Content Industry Group categorically rejected this scheme, stating that it fell “well short of the expectations we had had for an open, balanced and fair solution”. It was basically a “we don’t negotiate with terrorists” kind of answer — no quarter given.

What this should indicate to the Federal Government is that if it does examine the case for modifying Australia’s copyright law, it will not find a reasonable and practical argument on the case coming from the film and TV studios being represented by AFACT. Instead, what it will find is a strongly one-sided argument which will not aid it in making good policy and balanced legislation. Why should any Government deal openly with such an intractable and single-minded group of organisations? The reality is, it shouldn’t. The Federal Government should wait until the film and TV studios appear prepared to negotiate a balanced case before stepping in on the issue of online copyright infringement. Only then would it achieve any ground on the issue.

Lastly, there is the issue of the Government’s own position on the issue.

The fact that the two sides of the debate — ISPs and content owners — are so strongly opposed in the copyright infringement debate leaves the Government with nowhere to go on the issue. It cannot afford to take one side or the other, for fear that it will bring the wrath of the other down upon its head. If it enforces an arbitrary enforcement mechanism on Australia’s ISPs, it risks huge public displeasure and even the possibility of court challenges. Don’t discount the power which telcos like Telstra wield. When Telstra speaks — as it has in the past, backing iiNet on the issue of Internet piracy — Australia’s public listens.

If it goes too far towards the other side, however, publicly backing the ISPs completely on the issue, the Government risks alienating the powerful media interests, especially the US film and TV studios which have been central to a wave of US legislation aimed at curbing Internet piracy globally. The Australian Government does not want to be seen to be publicly rebuking the sorts of US interests represented by the content industry.

Thus the government’s preference for an industry-led settlement on the issue — a position which allows it to avoid irritating both local and global stakeholders. By doing nothing, Australia’s Government is right now thinking, it will upset no-one.

When you take all of these factors into account — the fact that Australia’s copyright regime is working for other branches of the content industry, the lack of willingness by AFACT and its backers to negotiate on the issue at all and the treacherous minefield the Government faces in forming policy in this area — it seems obvious that the Government should ignore AFACT’s demands for legislative relief following the iiNet High Court case and simply sit on its hands for a while to see how the situation pans out.

My personal bet is that in three to four years, the issue will have gone away entirely, as the film and TV industry moves to new commercial models delivered entirely through the Internet. With the music, games and book industries already having gone strongly down this path, it is only a matter of time before the film and TV studios do too, resolving the matter once and for all — in the favour of consumers, and the funding of great content widely available on the right terms for all.

If the Government waits a little, one suspects, this troublesome debate and perhaps even AFACT itself will be exterminated — once and for all.