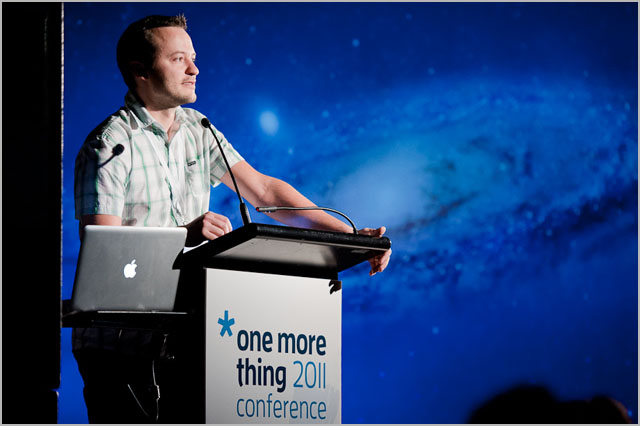 news The second edition of One More Thing, a conference of iOS developers and designers, has been scheduled for May 25th and 26th in Melbourne, Australia.

One More Thing is Anthony Agius’ brainchild. Agius, erstwhile founder of giant Australian Apple forum MacTalk and co-host on the popular MacTalk podcast, along with Melbourne-based graphic designer Lauren Watson, semi-regular co-host on the MacTalk Australia podcast, has organised One More Thing for the iOS industry. “If you’ve ever wanted to make a living off the App Store, making your own apps and setting your own agenda, One More Thing is where you want to be,” declares the OMT Conference webpage.

It’s not a traditional programming conference, say the organisers, but a meeting ground for professionals, amateurs and those who are interested. They say: “You won’t directly learn to code better. Your UI probably won’t improve either. But you will leave with more confidence in your abilities as an iOS developer or designer.” One More Thing is directed to those whose code is solid, but who are unsure of going it alone. In an interview with Macstories, Agius said: “The overall theme of the conference is still the same as 2011 – get developers confident, psyched, and ready to move from dreaming of making apps, to just doing it.”

Going one step up from last year, when all the speakers were independent developers based in Australia, this year the conference will feature 17 recognized independent iOS developers from all over the world. May 25th, was set for mini-conferences, with 30 people per session, in order to make the interactions with iOS programmers and designers more personal. Two sessions have been time-tabled: the morning session for Design, and the afternoon one for Code. According to the website: “We’ll start off with a casual presentation from each speaker about a topic they’re passionate about and then you’ll have the chance to pick the brains of these experts.”

Speakers for the mini-conference are:

The main conference on May 26th will have the iOS developers and designers “tell their stories of App Store success.” Speakers for the Main Conference are:

Podcasts from OMT have featured introductions to the speakers and a sense of what to expect from One More Thing, 2012. The conference venue will be the Melbourne Convention Centre. Tickets to the main conference are priced at $349 (an early bird price of $249 is available till April 12th), while the mini-conference session tickets cost $499 (limited to 30 people only).