news National broadband provider Exetel has published a day by day breakdown of the numbers of copyright infringement notices it has been receiving from content owners such as film and TV studios, with the figures regularly ranging into the hundreds each month, and potentially even beyond a thousand in any given 30 day period.

Copyright infringement notices are a controversial tactic introduced in Australia by the content industry over the past few years in an effort to address perceived high levels of content infringement of top TV shows, movies, music and video games by Australians using peer to peer platforms such as BitTorrent. Most of the larger ISPs do not forward on the notices to customers, viewing them as without strong enough legal basis. This is the issue at the heart of iiNet’s high-profile court defence against the Australian Federation Against Copyright Theft.

However, other ISPs have a policy of forwarding the notices on. Exetel in particular has long had such a policy — and will even disconnect users who receive too many notices.
In a blog post on Monday, Exetel’s new chief executive Steve Waddington published a graph (see the bottom of this article) detailing, on a daily basis, how many copyright infringement notices the company had received over the past four years since it started forwarding the notices on to affected users. Most other ISPs have never disclosed the amount of notices they receive.

Over the past year or so, the number appears to have been decreasing, hovering around 5 notices per day — which would still mean Exetel was receiving around 150 copyright infringement notices per month. The statistics are consistent with statements by fellow ISP iiNet during its court case that it had received thousands of copyright infringement notices from content owners over a five year period, the vast majority of which it ignored.

In his blog post, Exetel’s Waddington highlighted the trend of decreasing notices, and implied that it was puzzling, given the sheer rise in the amount of bandwidth available to broadband users over the past half-decade. Potential explanations for the decline, he said, could come down to:

“I don’t think the last point is true, their systems would be pretty much automated by now I would think, so there is no particular reason so think they have scaled back,” Waddington said. “P2P stealth I don’t think is the reason either. No matter how much encryption, both ends still need to know the IP address and the file name, and that can’t be hidden transferring a file to/from a ‘honey pot’ peer.”

“So, is it hurrah! for the good guys or has all the gold that can be plundered been plundered from those Spanish galleons?” he concluded.

The release of the statistics comes as the ISP and content industries continue to debate the issue of how to deal with Internet copyright infringement. Closed door meetings on the issue are being held by the Federal Attorney-General’s Department, and late last year the ISP industry proposed an educational system as a solution to the issue.

Consumers, however, appear to have been largely left out of the debate on the issue, with the Attorney-General’s Department explicitly banning consumer group representatives from attending the talks, and much of the rest of the debate being associated with pure industry groups such as the Internet Industry Association and Communications Alliance, as well as content industry groups such as AFACT.

Exetel’s graph (the X axis is days since its forwarding policy was introduced, and the Y axis is the number of notices received each day): 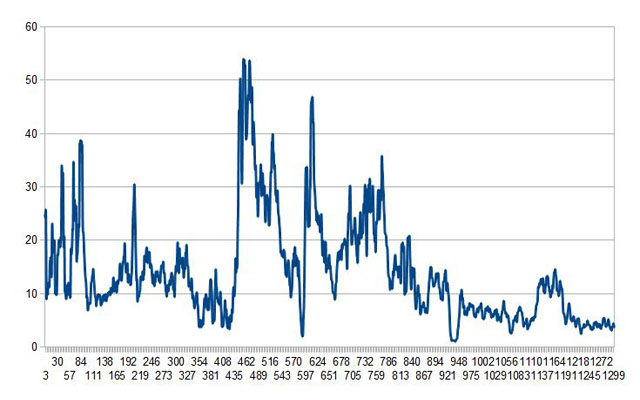