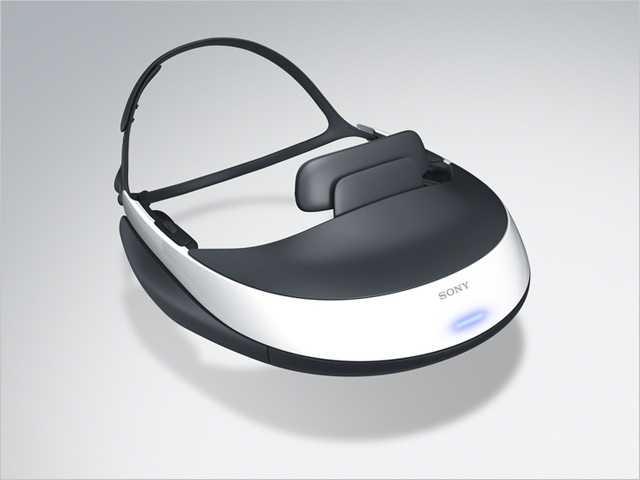 review If you thought 3D glasses were clunky, wait till you get a load of Sony’s new Personal 3D Viewer. This high-tech headpiece looks like something off the set of Robocop – and not in a good way – but its feature set is impressive enough that you’ll want to over-look its retro styling.

Fitted inside the visor-shaped plastic enclosure are two 0.7” 720p OLED screens, one for each eye, and shoved up against your eyeballs, these give the illusion that you’re viewing a 750” display from 20 metres away.

Sound good? The Personal 3D Viewer is both brilliant and flawed in its execution. Its brilliance stems from the fact that it works just as advertised. Once it’s strapped to your noggin and connected to a display source (it supports any HDMI source using a separate splitter box), it really does feel like you’re watching a big cinema display, albeit with a skewed sense of depth. Picture quality is excellent, as you’d expect from OLED displays, with vibrant, punchy colours, deep black levels and razor sharp detail. Sound is good too – the built-in headphones are more than loud enough at maximum volume, and deliver a rich, warm audio that simulates 5.1-channel surround sound.

We tested the Personal 3D Viewer with both an Xbox 360 and a Sony 3D Blu-ray player. The gaming experience is excellent – playing Skyrim, it had no problems keeping up with fast motion, although text in the far left or right corners appeared blurry. 3D playback also worked exceptionally well – the 3D depth was superior to what you get from a 3DTV, but not quite as good as the cinema 3D experience.

And now for the bad news. It’s hard to get the Personal 3D Viewer sitting just right on your head, and you may be one of the abnormally-shaped unfortunates (like this reviewer) that can’t get a comfortable fit not matter how much you move it around and adjust the various straps and pads.

At the very least, you’ll need someone to help you fit it, as it’s near impossible to make the necessary adjustments once it’s on your head. The Personal 3D Viewer isn’t light either, at 420g, and most of the weight is distributed towards the front, which can put a strain on your neck when you’ve been using it for a few hours. Depending on how securely you fasten it to your head, you’re also likely to develop red marks on your forehead and over the bridge of your nose.

Can you wear it for hours on end? Not really. The weight of the headset combined with the strain it puts on your eyes means you’re looking at around three hours tops before you’ll need to take it off and possibly pop a Panadol. The other thing worth noting is that it isn’t portable, so you can forget about wondering around the house with a wireless Xbox or PS3 controller or using it outdoors. The Personal 3D Viewer doesn’t have its own battery, and is powered by the HDMI splitter box. The bundled cable gives you 3.5m of wiggle room, which is just long enough that you can leave the DVD player or games console where it is and relax on a couch nearby.

We love the idea of the Personal 3D Viewer, and at $899, it’s actually cheaper than we thought it would be, even if it isn’t necessarily within reach of the average consumer. The convenience of being able to fire up a DVD or game in bed without waking your significant other is a huge drawcard, and we have no complaints when it comes to picture or audio quality.

That said, comfort is a huge concern, and while it’s designed to make you lose yourself in the gaming or movie playback experience, you’ll always be conscious of the headset due to the strap on the back of your head and the pressure against your forehead. Much as we enjoyed using it for the novelty factor, in its current incarnation, the Sony Personal 3D Viewer just too heavy and fiddly to use on a regular basis.