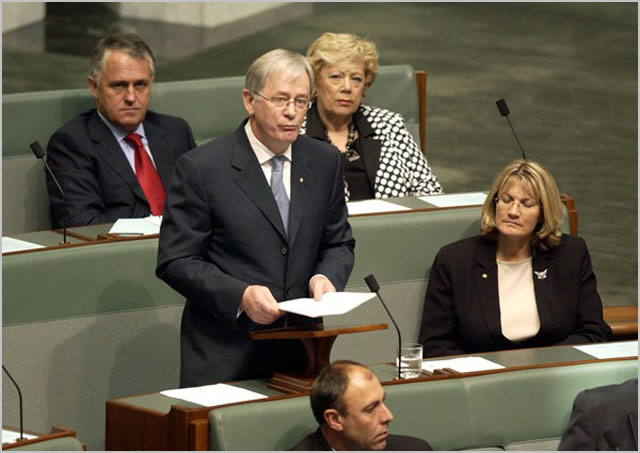 news The Federal Opposition has again incorrectly alleged that it could save money by cutting the Labor Federal Government’s multi-billion dollar National Broadband Network project, despite financial projections which show the project is likely to make the Government billions.

The NBN is not listed in the Federal Budget as an expense because it is technically a government investment and will consequently not divert money away from other projects. This accounting technique has been verified by economists from the Parliamentary Library of Australia as an “internationally accepted accounting standard”.

In addition, in the long term, NBN Co’s projections show the network is slated to make a return of between 5.3 percent and 8.8 percent on the up to $44.6 billion that will be invested in the network — meaning it will return an amount ranging from $1.93 billion to $3.92 billion, as well as delivering Australia a fibre optic telecommunications network to replace Telstra’s aging copper infrastructure.

In an interview with ABC News 24 on Monday, Shadow Finance Minister Andrew Robb was questioned by presenter Lyndal Curtis on the Coalition’s ongoing claim that cutting the NBN would save money.
“On the question of spending NBN savings on easing traffic congestions, that’s a saving you then couldn’t book as a saving if you accept, which the Government doesn’t, that the NBN is effectively on the books. Is that promise, spending some of the money that you were counting on to save?” Curtis asked Robb.

Robb replied that the NBN was “borrowing money” — “$50 billion they’re going to borrow in the end, $37 billion we know for sure but it looks like another $50 billion”. “That’s got to come from somewhere. That’s money that could have been invested somewhere else, in a more productive outcome and whether it’s government money or private money, it is money that could be spent on things that would have far greater productivity improvement and we could be having an NBN at much lower cost,” Robb said.

“We could get the best of both worlds but the bottom line is that that money, it’s a combination of private and public. It’s money that is being very inefficiently invested. That money could be going to other purposes and government policy can help that happen but not necessarily always with government putting taxpayers’ money into the mix.”

However, it is believed that Robb’s statement that the money could have been spent on other matters is technically incorrect.

The NBN funding will not divert money from the Federal Budget, as it does not appear on the budget as an expense. And with the project expected to make money in the long term, cancelling it would mean the Government would not make the expected positive return on the project, meaning those extra funds would not be available in the long term for other projects. Ratings agency Standard & Poor’s reaffirmed Australia’s AAA credit rating in September 2011, meaning it is not likely that the Government will have problems using debt to fund the NBN.

Oversight
Separately yesterday, Robb demanded in a statement that Finance Minister Penny Wong “stop distancing herself from the NBN” and take a more active oversight role on a project which Robb claimed threatened “to be a massive drain on government finances”.

Robb called on Senator Wong to release monthly financial statements for NBN Co in her name. “In addition to updates regarding key financial activities, including equity injections, these statements should also provide updates in relation to contracts awarded, other acquisitions and expenses as well as staffing levels,” Robb said.

Robb said it had been reported that NBN Co had already awarded contracts worth more than $7 billion, but the public had “heard nothing from the Finance Minister about whether these decisions will present value for money to taxpayers”.

“What ‘red flag’ mechanisms are in place to alert Penny Wong to potential NBN Co activities that may not present best value outcomes and what veto authority does the shareholder minister have over decisions that are at odds with the interests of taxpayers?” Robb asked. “Penny Wong has tried to distance herself from the NBN which could prove to be the nation’s biggest white elephant, when she should be all over it. She has an obligation to become more actively involved and sharpen her clear oversight role,” he said.

So far, there has been no indication that NBN Co has blown its budget or had financial impropriety within its operations. The organisation reports regularly to the Federal Government, is subject to Freedom of Information laws, and also regularly answers questions from Labor, Coalition, Greens and independent parliamentarians through a series of parliamentary committees devoted to overseeing the project. The Federal Auditor-General also has the power to investigate NBN Co if it deems it necessary.

Wong, according to AAP, responded to Robb’s statement by stating that Robb’s assertion that there was no information, accountability or transparency was “simply unfounded”, with the Finance Minister to reply to Robb’s letter “in due course”.