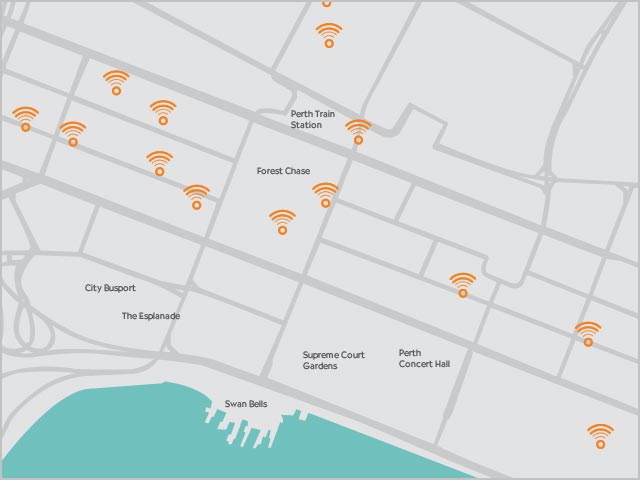 news National broadband company iiNet revealed late last week that it had installed a Wi-Fi service throughout the Perth central business district that would let any customer of its growing family of brands access free Internet in the area.

“Over the past few months we’ve been busy working behind the scenes to install a number of wireless hotspots around the Perth CBD to make life a little easier when you’re out and about,” the company’s operations manager of its business division, Balmik Soin, wrote on its blog last week.

“There are 15 hotspot locations across the city. Whenever you’re near one of the hotpots with a wireless compatible device in hand, simply select the ‘iiNet’ WiFi network and log in with your account details. You don’t even need to know your primary account username and password – any email address and password associated with your account will let you onto the WiFi network.”

The service is branded ‘iiNet’, but customers of most brands within the iiNet group (including Westnet and Netspace) will be able to access the service, with the company to add access for customers of its new acquisitions TransACT, Internode and AAPT soon.

Soin appeared to hint that the iiNet Wi-Fi service could be coming to other cities shortly. “This is just the start of our Wi-Fi rollout plans. Keep an eye out for further announcements on where you can access ‘iiWiFi’ (say it out loud, it has a nice ring to it!) as we’ve got a couple of new locations in the pipeline already,” he said.

iiNet has not historically invested much in Wi-Fi networks around Australia, preferring to focus on its direct broadband offering. However, rival Internode, which iiNet recently announced it would acquire, operates a large number of Wi-Fi hotspots around Australia, which are free to access. Internode has also partnered with companies such as CityLAN, cafe chain Cibo Express, airports in Darwin and Adelaide and others, in order to broaden its service nationally to some 400 locations.

At various stages over the past few years, a number of Australian Governments and other organisations have offered or planned to offer free Wi-Fi services in CBD locations. In November 2006, for example, then-NSW Premier Morris Iemma announced that the CBDs of key cities in NSW would get free Wi-Fi broadband within the succeeding three years. The project was eventually scrapped.

Many in the telecommunications industry believe that in large part, the popularity of 3G mobile broadband, either through dedicated USB dongles for laptops or through tethered smartphones or tablets, had made the need to offer Wi-Fi services fairly redundant. However, new Wi-Fi services such as iiNet’s are still launched at regular intervals in Australia.