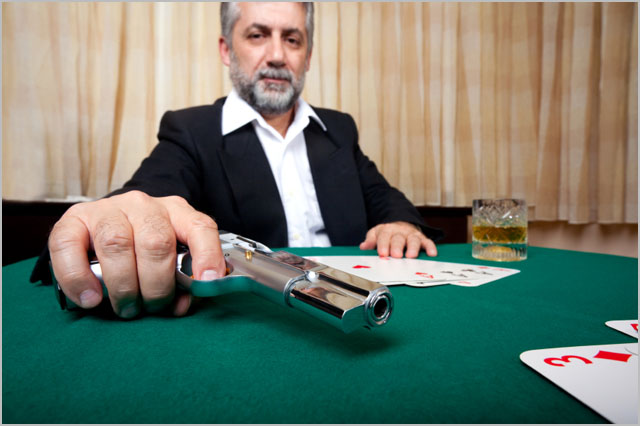 opinion Over the past week a rather pathetic little game of bluster, bluff and ultimately light blackmail has played itself out in Australia’s telco sector as a handful of Australia’s major ISPs have done everything in their power to demonstrate just how self-interested they can be when it comes to exploiting the National Broadband Network.

This game — let’s call it Quigley’s Hold’em, or perhaps Dalby’s Five DSLAM Draw — probably kicked off, as most such shady efforts do, late in the week, perhaps as the shadows of last Friday night were drawing near and the weekend, with all its inherent vices, began to beckon the players away from the clear sunlight of honest dealing.

At the time, the head negotiators from most of Australia’s major ISPs — at least including iiNet and Internode, but likely Telstra and Optus as well — informed the National Broadband Network Company that they were not planning to sign the comprehensive wholesale agreement which it had labored with them for some 15 months to develop.

Despite the fact that the document had already been through five draft iterations and hundreds of hours of consultations, the ISPs told NBN Co, it had still not addressed some of their key concerns; namely, the ability of the Australian Competition and Consumer Commission to oversee the relationship, the liability in the case of problems, and equivalence issues with all ISPs signing the same document.

Now, normally this kind of issue would be part of the normal cut and thrust of negotiation between the ISPs and NBN Co — fair points to raise. But, to add a little punch to their demands, at the last moment, the ISPs played two hidden trumps: Timing, and the media.

Unlike the ISPs, NBN Co has been on a clock in the negotiations. The existing trial agreement between the two sides, which has allowed some 4,000 customers to be signed up to NBN Co’s infrastructure nationally, expired today. This isn’t a problem for the ISPs. After all, they need be in no rush to move their existing customers onto the NBN’s infrastructure. Either way — if the customers stay or go — the ISPs get paid.

But it is a vast problem for NBN Co.

The ridiculous furore that erupted when NBN Co released its current customer sign-up numbers just after New Year’s Eve should go some way to illustrating the fact that the company is currently fighting for its own survival. If NBN Co can roll out enough infrastructure and sign up enough customers over the next year, it faces a chance of continued existence under a Coalition Government; if its effort stall, it will fall victim to Tony Abbott’s oft-repeated promise to shut the project down.

The ISPs know this. And so, when faced with NBN Co’s intransigence in modifying the terms of its wholesale contract, at the eleventh hour, they bent the company over a barrel and reached for one of the easiest and most manipulable weapons available to anyone in Australian society: The media.

“NBN Co to bar defiant telcos,” screamed the Financial Review’s article on Monday morning, which painted NBN Co as a draconian monopoly, “threatening” to “ban” ISPs from signing up new customers. And the rest of the media swung into line, with more headlines: ‘NBN Co pressures telcos on access agreements’; ‘NBN Co stands firm on wholesale contract’; ‘Under 50% of ISPs sign onto NBN contract’; ‘Tension as NBN trial agreement ends’; the headlines went on forever.

On Monday, NBN Co was standing fairly firm, soberly highlighting its extensive 18 month consultation efforts and the lengths to which it had gone to meet the ISPs’ demands. But it only took two days for the company — flailing under a fictional ‘pressure’ entirely created by the ISPs and a media ravenous for fresh meat in the slow news days of the new year — to buckle. NBN Co’s bluff had been called as the ISPs refused to give ground.

This morning, it was again the Financial Review which brought us the new developments. “NBN backs down on agreement,” the newspaper reported. And “sources close to negotiations” — read: the ISPs — noted that NBN Co had retreated in precisely the areas the ISPs were complaining about.

Now, I don’t want to go too far in alleging improper behaviour on the part of the ISPs. Solid journalistic efforts by the AFR’s reporter on this issue, David Ramli, did faithfully bring this important issue to light. And, of course, the fact that we know about all of this is itself a positive thing: Transparency in the NBN process is only to be lauded. Then, too, it is common commercial practice for companies of any stripe to use any legal tool at their disposal to bring negotiations to a successful close. Nothing illegal has been done here, and probably even nothing unusual for the private sector.

However, there are several disturbing aspects to what happened this week which I think bear further rumination.

The first is the adoption by several major ISPs of the sorts of language during this NBN process which we are more accustomed to hearing from the Daily Telegraph. Internode carrier relations manager John Lindsay, for example, raised a rather unusual scenario when speaking to the AFR about the liability issue. “You don’t want to be in a position where NBN Co’s installers have wrecked your customer’s house or have no incentive to do connections in a timely fashion, with you getting the blame,” he said.

Really? Painting NBN Co as house wreckers? I would have thought that below Lindsay.

Then there was this curious statement on the part of iiNet regulatory chief Steve Dalby, again on the liability issue: “It means that if customers are affected by outages they can sue us, but we can’t pass that liability through to the cause, which would be NBN Co, and that just doesn’t make any sense.” Really? It’s extremely rare — in fact, almost unheard of — for a customer to sue an ISP about their connection going down. I can’t imagine this will be a regular event under the far more reliable fibre future NBN Co has planned for us. NBN Co ‘wreckers’, customer lawsuits? Is the iiNode which we know and trust? It doesn’t seem like it to me.

Then there was the nature of the negotiations themselves.

Wikipedia defines a cartel as being a formal (explicit) agreement among competing firms, which Australia’s ISPs most certainly are. It then goes on to explain that cartels usually occur in oligopolistic industries, where there are a small number of sellers, usually selling homogeneous products. The aim of cartels, it adds, is to increase the profits of individual members by reducing competition.

Maybe I’m taking this argument a bit far, but when most of Australia’s ISPs gang up together on the same issues and force a major wholesale service provider like NBN Co to back down, by exerting pressure through the media, that sounds a great deal like a cartel to me. There’s no competition here; there’s no fair play; there’s only a gang of what — five or six ISPs, representing overwhelming market share — effectively publicly blackmailing a joint supplier.

Then there’s the political angle.

The whole reason why the ISPs are able to exert pressure on NBN Co is because the company has aims that are not commercial. NBN Co’s mission is to roll out telecommunications infrastructure around Australia and then sign customers to use it, through utilising relationships with retail ISPs. This isn’t a commercial business proposition — it’s a mandated government policy. And so while it doesn’t really have to ‘sell’ its products and services to ISPs as such, as they will be forced to use them eventually anyway (when other broadband networks are shut down), neither do ISPs have to buy them, until that shutdown date comes.

The difficulty is, however, is that while NBN Co is locked into its course of action and cannot deviate from its mission, the ISPs are not, and they all have varying degrees of cooperation with the NBN policy. Some, such as Internode (or should I say, iiNet?), are pretty much wholly on board, while others such as TPG are so far ignoring the whole thing altogether. This gives the ISPs an extraordinary degree of non-commercial negotiating power.

This week, the ISPs flexed that muscle. “Back down on your commercial contracts,” they told NBN Co, “or else we’ll make the NBN project look like it’s stalling, and your political masters very unhappy.” The pathetic statements they issued this afternoon, seeking the validation of the public and the media for signing contracts with NBN Co — whose public credibility they flirted with wrecking through their game — only makes blisteringly obvious their belief in the usefulness of the press in the negotiating process.

As a believer in free markets and the value of competition, all of this makes me very, very uncomfortable. We have collusive action by Australia’s telecommunications giants, leveraging political angles and the threat of the media. We have bluster from formerly honourable ISPs painting an important national project as “wrecking” people’s homes. And we have an 18 month NBN negotiation process undercut at the very last minute. Who knows what the long-term implications will be.

If I were the ACCC, I would be looking very, very carefully at the events of this week, as I’m sure Shadow Communications Minister Malcolm Turnbull and other elements of the Coalition are. How far can we trust the major players in Australia’s telecommunications sector? At this point, I am far from sure.