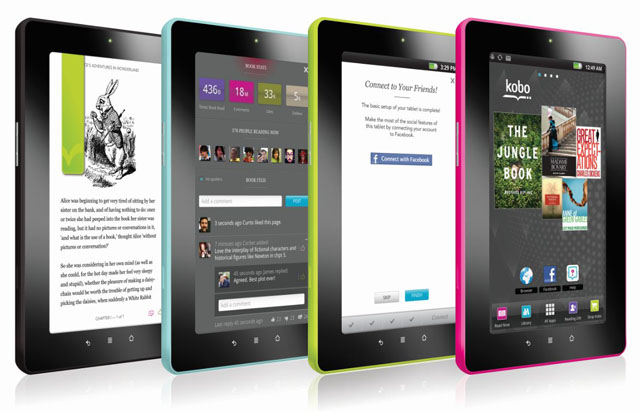 news Kobo, the eReading service with over 2.5 million eBooks, newspapers and magazines in one of the largest eReading catalogues globally, has dropped prices for its eReaders at top-tier Australian retail partners.

Michael Serbinis, CEO of Kobo said that with a variety of cost effective options, Kobo was the perfect gift for anyone. “eReaders are hot this holiday season and with the Kobo selection of devices, it makes giving the gift of eReading easier than ever,” Serbinis said.

The Kobo Wi Fi, which comes preloaded with 100 free classic reads, is being offered at $99.99 at Angus & Robertson, Borders, JB Hi Fi and Collins Booksellers. Users can browse and buy eBooks any place, any time on the go. The lightweight and compact device is easily portable, carries up to 1000 eBooks and is available in a choice of three colours.

The Kobo Touch, with Infrared Touch Technology is on offer at $139.99 at the same retailers. Users can swipe or tap to turn pages easily. The new intuitive touch interface enables readers to look up a word, highlight a phrase, increase font size, navigate fast through a book or entire library, and zoom into an image.

The Kobo Vox, released in October 2011, comes pre-loaded with apps and allows access to Wi Fi, Facebook, Rdio, Web browsing, games, email and a store with over 15,000 apps for Android, and is now available at $269.99. The Vox adds a large selection of colour books for all ages to its store, including interactive Read Along children’s books on its 7” FFS + multi-touch multi-media screen. Other features aid social reading, including Kobo’s Reading Life experience with Kobo Pulse. Kobo Vox comes in a choice of four colours and is on offer for pre-order at Collins Booksellers.

Previously, the Kobo eReader, first released in May 2010, was the first eReader on the Australian market selling at under $200, as part of its aggressive marketing strategy to sell for less than Amazon’s Kindle.

The Kobo eReading service is built on an open platform to enable users to read eBooks from other stores using the ePub format and read PDF documents and books on an increasing range of Kobo eReaders and apps. Consumers can also borrow and read eBooks from their local public library.

Kobo’s free eReading apps allow users to read on any device, including laptops, desktops, Android phones, iPhones, iPads and other tablets, Blackberry Smartphones and PlayBooks. Using Kobo Sync, users can read from one device to the other, and pick up from the last page they read since their library is always kept up to date.