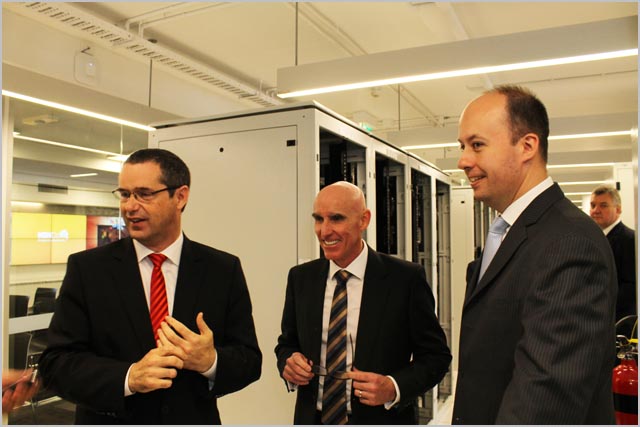 The National Test Facility (NTF) will permit internet service providers (ISPs) and telcos to test equipment and services that they will make available as the NBN rolls them out. NBN Co’s new products will also be tested here. The planned multicast capability is one such product, which is aimed at providing telcos and ISPs the ability to carry high-quality video that supports a new wave of services including Internet Protocol TV in high-definition.

NBN Co also unveiled two new interactive facilities that will help Australians see for themselves how the NBN will work, what it involves and how customers will benefit as high-speed broadband reaches every home and business. The two new resources are:

These facilities have taken over a year’s work to build, and the company promises to have created over 900 jobs in Victoria by the end of 2012.

Conroy said that the new initiatives, created in direct response to numerous queries about the NBN rollout details, would help both service providers and consumers discover the workings and benefits of the NBN. “The Test Facility will allow telephone and internet service providers to test their services end-to-end before they are used in the live network environment. It will also be used to test new services such as NBN Co’s planned multicast capability,” Conroy explained.

Mike Quigley, NBN Co CEO, described the Docklands facilities as the nerve centre of the NBN, and a hub for future advancement as the company delivers broadband across the country.

Quigley added, “At the same time, we receive thousands of emails and calls each week from individuals, businesses and local councils asking when the NBN is coming to their area, and wanting to know how it works, what they can use it for, and how to get connected. The two demonstration facilities make it possible for people to experience for themselves some of the exciting applications in education, health and business that can be delivered over the NBN.”

Up to 100,000 people a year will pass through the NBN Co Truck and the Docklands Discovery Centre, according to the company’s estimates. Online booking to visit these new facilities is available.

Victorian Technology Minister Gordon Rich-Phillips, whose State Government sits on the other side of politics to the Federal Labor Government, welcomed the NBN facilities launch in Victoria.

“Our government is committed to generating opportunities for Victorian companies during the building and operating phases of the NBN, and in supplying high-speed broadband-enabled goods and services to homes, schools, workplaces, and businesses,” Rich-Phillips said in a statement. “The Coalition Government understands the importance of high-quality broadband whatever the platform and will continue to work with NBN Co to get Victoria a fairer share of the NBN roll-out.