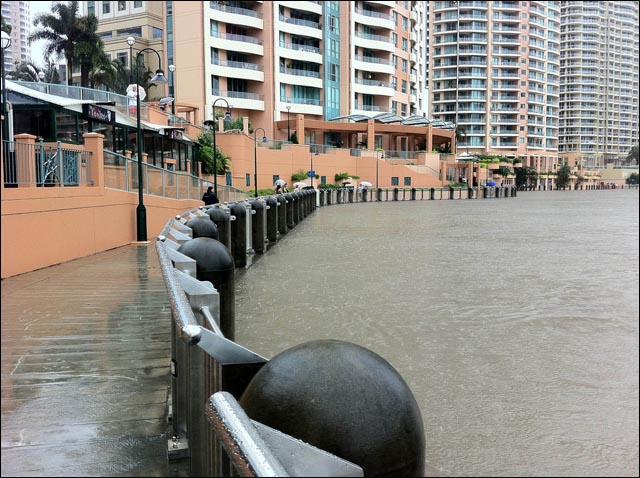 AAPT chief executive Paul Broad has defended the ability of his company’s infrastructure to weather natural disasters, after it appeared to be one of the few telcos to have its actual datacentres under threat this week by Queensland’s rising floodwaters, although many lost key portions of their fixed or wireless telecommunications infrastructure.

A comprehensive audit by iTNews showed most of the state’s hosting providers were not under threat of having their infrastructure shut down this week, despite most of the state being declared a natural disaster area. Many companies had their core facilities hosted in Fortitude Valley on higher ground, which escaped most of the problems suffered in the Brisbane central business district.

However, in customer communications this week, AAPT stated a number of the telco’s co-location hosting sites were “under threat”, and it had commenced shifting its equipment out. In addition, AAPT told customers on Wednesday that it would be powering down the equipment at 167 Eagle St – alongside the river’s edge – due to that portion of the Brisbane power grid going down.

One AAPT customer at the Riverside building on the same street said the telco had also had problems in its facility in that building, and other sources highlighted problems at a separate Queen St facility.

However, in an interview this morning, Broad said AAPT had issued pre-emptive warnings to its customers about its facilities, but in some cases the outages never eventuated, although AAPT did move some equipment at some stages, and did use backup power generators to keep equipment running. “We put information out to customers in anticipation of things going down, and it was interpreted as things had gone down,” he said.

The chief executive said he resented he suggestion that AAPT had suffered something different than other telcos in the state, and highlighted the fact that other telcos had also had facilities under threat – for example, he said, Telstra’s telephone exchange in Toowoomba was under water.

“I think our facilities are equal to everyone in the land,” he said.

However, Broad did not directly answer the question of whether AAPT would consider relocating its facilities in Eagle St, where it is known to at least operate one Point of Presence. Eagle St is directly next to the Brisbane River, and lost power after Energex shut off its main current due to rising water in the area.

PIPE Networks’ facility just a few blocks inland from the river did not suffer the same problems, with the company’s chief executive Jason Sinclair manning the building for much of the time the floodwaters were rising. Sinclair could see Eagle St and the rising floodwaters in that location from his office.

Asked whether it was wise to locate AAPT facilities next to the river, Broad said: “We’ve all got facilities there. Was it wise for Telstra to put an exchange in Toowoomba? People who ask those questions, really are missing what was a natural disaster.”

Broad said in general, AAPT’s network was now back up and running fine, almost “business as usual”, despite some minor faults, with a fibre cut near Toowoomba being fixed and exchanges in the area operating.

In general, the chief executive focused on the positives to come out of the natural disaster for AAPT. “What I’ve found to be brutally honest is that our Qld customers have been very understanding and supportive in what we’ve done,” he said, noting AAPT’s staff had rallied together in the crisis and had done an outstanding job in very difficult circumstances – noting especially the efforts of engineers working on the fibre effort.

AAPT will send more staff to the area today to relief employees who have been working around the clock, and Broad himself will be in Queensland “hopefully next week” to see staff and make personal contact with many of the key customers. And the chief executive also had a word for his colleagues at other companies.

“I think the fact is the telco industry came together amazingly well to help solve all of our problems,” he said.