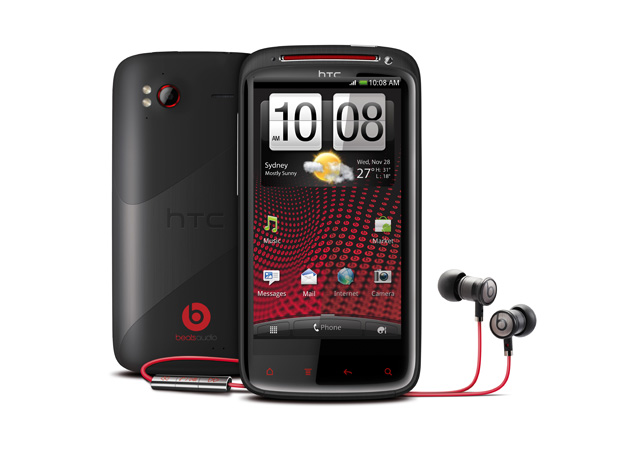 review It isn’t often we see the sequel of a phone released within a few months of the original. Come to think of it, we’re not sure it’s ever happened before. But that’s how quickly HTC is churning out smartphones these days. Not that it’s really a bad thing. The first HTC Sensation was a triumph of gorgeous hardware, intuitive software and cutting edge specs, and the XE picks up where it left off by adding a faster processor, bigger battery, and built-in Beats Audio technology. But just how much of an upgrade is it over the original Sensation – enough to make existing Sensation owners jealous? Read on to find out.

Design
Nothing much has changed from the first Sensation. It’s the exact same design, down to the sleek unibody plastic and aluminium chassis, 4.3″ display, curved back and rounded corners. The only difference on the outside is a few colour changes. The casing’s now black with a brushed metal finish, the speaker grill, capacitive buttons and frame around the camera are red, and there’s a Beats Audio logo on the back.

The XE is also a few grams heavier (151g) to accommodate the bigger 1730mAh battery (the original Sensation has a 1520mAh battery), but otherwise, it feels just as good in the hand. Obviously it’s not as light as other recent ‘super-phones’ like the Samsung Galaxy S II and Motorola RAZR, but the extra weight gives it a reassuringly solid feel. Owners of the original Sensation should be pleased to learn that the XE’s larger battery fits like a glove in the older phone’s casing as well.

Features
The Sensation XE has the same Qualcomm MSM8260 chipset as the first Sensation, only the dual-core CPU is clocked at a higher 1.5GHz speed, officially making it – on paper at least – the fastest Android phone for the moment. This is paired with the same 768MB RAM found on the first Sensation, along with the same 8-megapixel camera, tri-band 850/900/2100MHz 3G connectivity, 1GB of user-accessible storage (along with a bundled 8GB microSD card) and 4.3” 960 x 540 Super LCD screen.

But the main thing that separates the XE from the original Sensation is the inclusion of Beats Audio technology. Like its Sensation XL stablemate, the XE has a Beats Audio sound profile that’s specially tuned to match Beats By Dr Dre headphones. Alas, the XE doesn’t come with the excellent Beats By Dr Dre Solo headphones that the XL comes with – it’s lumped with the cheaper urBeats in-ear headphones. Still, they’re better quality than the usual fare, with a bright red cord, inline remote control and five sets of ear tips in different sizes.

Another area the XE lags behind the XL is in software. While the XL gets the benefit of bug fixes and performance tweaks found in Android 2.3.5 and HTC Sense 3.5, the XE uses the same Android 2.3.4 operating system and HTC Sense 3.0 as the first Sensation – a move that lets it down in the benchmarks, as you’ll see in the next section. If you aren’t yet familiar with HTC’s Sense software, it’s a graphical overlay that sits on top of Android that adds a few welcome tweaks like a customisable lockscreen, themeable interface, enhanced homescreen widgets and a modified launcher and notification window. It certainly puts a friendlier face on the Android interface that you can personalise more than any other phone, but it does drag on the system resources more than a vanilla Android build.

Performance
We never considered the original HTC Sensation to be a slow poke, and while there is a speed improvement on the newer XE, it’s really only something you’d notice by using both phones side by side. They’re equally swift at waking up from sleep and unlocking, and things like scrolling, swiping and pinching are equally responsive on both units. Where you see a small speed improvement is bringing up the apps launcher, which comes up a fraction of a second faster, and things like turning on the camera and launching third party apps happen a couple of seconds quicker on the XE. Using Facebook, for instance, the app launched and loaded the news feed in 4.55 seconds on the XE versus 5.91 seconds on the original Sensation.

But it still came off slower than the Motorola RAZR and Samsung Galaxy S II for the two systems benchmarks, despite having a faster clock speed. What’s even more surprising is that the single-core Sensation XL achieved a better GL Benchmark score than the Sensation XE, despite having the older Adreno 205 graphics, as well as a higher Rightware Browsermark score. We’re assuming this is because the XL has the newer -and less resource intensive – Sense 3.5 software and Android 2.3.5 operating system.

The bundled urBeats in-ear headphones produce the audio equivalent of what we’d expect from a $50 pair, which is to say they’re a little better than the usual bundled earphones, but not by much. We listened to the same music on the original HTC Sensation and HTC Sensation XE using the urBeats headphones, and the difference in bass response was very subtle – we had to play the same tracks two or three times to discern any difference, and even then you’ll only notice if you throw something really bass-heavy at it.

There are a couple of caveats worth noting with regards to Beats Audio: first, it only works for audio output through compatible headphones – the external speaker doesn’t get the same enhanced bass treatment, and produces the same typically tinny output that most smartphones have; and it only works in the Music app and when you play videos through the Gallery app, so if you play media through alternative music or video players, you won’t get the benefit of Beats Audio.

The XE’s bigger battery had it lasting roughly two hours longer than the original Sensation. In our case, which had Gmail, Facebook, Twitter, Tweetdeck and Peep updates being pushed to the phone in the background, 10 calls of roughly a minute each, five text messages, two photos, an hour of music playback, 3G web browsing for an hour, Wi-Fi web browsing for an hour and a half, and checking email throughout the day, the Sensation XE lasted for 26 hours and 7 minutes.

Conclusion
HTC has made a great smartphone even better with the Sensation XE, but the improvements are minor. This is good news for owners of the original Sensation, leaving them with far less to envy in the newer model, although we can’t help feeling that HTC should’ve done more to differentiate the XE. Blessing it with the same updated software that’s found on the Sensation XL would’ve been a start, and giving it more than just 1GB of user-accessible internal storage and 768MB of RAM would’ve made more sense. Also on our wishlist would be better bundled headphones to take advantage of the Beats Audio technology and a more dramatic colour change – a bright red to match the headphones or pure white like the Sensation XL would be our top choices.

But this is all just nit-picking, and it shouldn’t take away from the fact that the Sensation XE is an excellent smartphone in its own right. It may not perform as well as some of the other top-shelf smartphones, but it makes up for it with a sexy design, slick (albeit slightly behind-the-times) software and decent battery life. It’s available exclusively from Vodafone for $0 upfront on the $59 Cap.