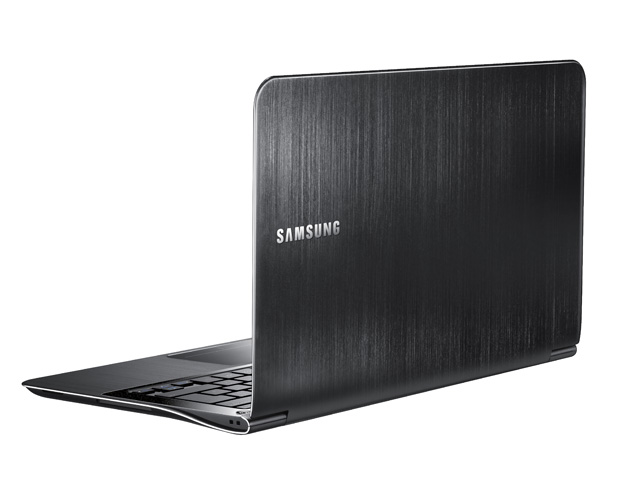 review The ultraportable laptop market seems to be going gangbusters at the moment. Between the lovely MacBook Air, luxury thin-and-lights like the Sony VAIO Z and Samsung Series 9, and the recently launched ultrabooks, most of the action in mobile computing – at least so far as notebooks go – seems to be seems to be happening in the 1-1.5kg weight class.

The Series 9 originally launched in April in a 13.3” Intel Core i5 version, and Samsung followed it up a couple of months ago with variants of the 13.3” model with Core i3 and Core i7 processors, as well as a smaller 11.6” version with a Core i3 processor, the latter of which we’ve gotten in for review.

Like every other ultraportable, the Series 9 has a strong competitor in the MacBook Air, and even more so in the 11.6” space, given Apple is one of the few manufacturers with a notebook in this screen size. Samsung has had a lot of luck challenging Apple in the smartphone and tablet spaces, but can it pull the same thing off for ultraportable laptops?

Design
At first glance, the 11.6” Series 9 is easily mistaken for a netbook due to its small screen and airy one-kilo weight. But closer inspection reveals a few details that distinguish it from its cheaper cousin. The black Duralumin casing is the first cue, a material that looks far more luxurious than the usual cheap plastics, and is twice as strong as aluminium while being just as light. There’s also a funky silver trim that goes all the way around the top and bottom halves, ending with a wave at the hinge that wraps around the power connector on the left and the Kensington lock slot on the right. Other premium flourishes include the backlit keyboard, a skinny 15.9mm profile (at its thinnest point), and packaging that’s even more decadent than the MacBook Air’s.

Samsung has taken the idea of a seamless laptop and run with it. Like most skinny ultraportables, the Series 9 uses a sealed battery, but it takes the streamlined aesthetic further by concealing all of the ports. Both the left and right side array of interfaces are hidden by a plastic flap that pops out and slides down towards the front of the notebook. The left houses a micro-HDMI port, a proprietary jack for connecting the supplied Gigabit Ethernet adapter, and a USB 2.0 port, while the right houses a microSD card slot, a USB 3.0 port and a headphone/microphone jack.

The decision to go with microSD rather than the standard SD slot is controversial: on one hand, it makes it easier to transfer files to smartphone memory cards; on the other hand, it means you’ll have to transfer photos from a digital camera by using its USB cable. Considering most microSD cards come with an SD card adapter anyway, we’d have preferred Samsung stuck to the full-sized SD card slot.

Features
It may be close in size to a netbook, but the internals of the Series 9 are that of a big boy’s laptop. The 11.6” Series 9 uses an ultra-low-voltage 1.3GHz Intel Core i3-2357M processor with 4GB of DDR3 RAM, Intel HD Graphics 3000, and a 64GB SSD. It also runs Windows 7 Home Premium. The 11.6” display has a resolution of 1366 x 768 pixels (again, much better than a netbook’s) with a 16:9 aspect ratio, and the display’s LED backlighting is brighter than average at 340 nits, making it easier to see outdoors. Viewing angles are good, so you won’t have any problem sharing the screen, and colours (all 16 million of them) are rich and vibrant.

The extra width afforded by the additional 1.5” of screen space has enabled Samsung to fit in a bigger keyboard than you’d usually find on a netbook. It’s not quite full-sized (lacking a little on the vertical axis), but after a quick adjustment period, we were happily touch typing away. Aside from the shorter deck, the island-style keyboard is lovely to type on, with just enough travel and cushioning beneath each key. There’s also just enough space to park your wrists below the keyboard, although if you’ve got larger-than-average hands, you may find the meat of your palms hitting the edge of the laptop.

The buttonless touchpad was initially a nightmare, regularly ignoring our attempts to manoeuvre the mouse pointer and use the left and right mouse buttons, but a driver update (automatically pushed out by Samsung) seems to have fixed the problem. Samsung has taken a leaf out of Apple’s playbook by enabling two finger scrolling across the entire touchpad, not just the far right hand side, although it uses the traditional style of scrolling rather than the ‘natural scrolling’ that Apple rolled out in its latest Mac OS X update.

Performance
The Series 9 offers decent performance for everyday tasks like web browsing and word processing. We were able to get it to slow down by streaming a Full HD YouTube video in the background, but even then, it was a minor speed bump that had tabs in Internet Explorer taking a split second longer to open. Nothing like the horrible lag that plagues netbooks under similar circumstances. With 10 tabs open and a couple of chat windows going, we were able to stream music from Music Unlimited without any hiccups in the stream.

The Series 9 gets a little warm underneath, but not bad enough to scald your legs when you’re using the laptop, without any, er, pants on. Resume times are respectable at just under six seconds (twice as long as the advertised three seconds), and if you disable the Windows 7 login screen, you can get to the desktop from a cold boot in a speedy 21 seconds. 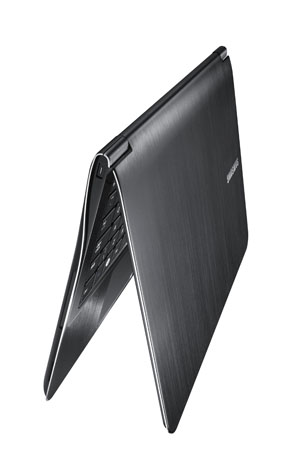 The speedy SSD and generous 4GB of RAM pushed the Series 9 to above average performance for a Core i3 ultraportable. It scored 5970 in PCMarkVantage (a benchmark that tests Windows performance across the board) – the category average is roughly 4000. But its graphics performance seems to be less than half of what it should be at 1561 3DMarks using 3DMark06. Other laptops we’ve reviewed recently with the same integrated graphics have performed significantly better, such as the Lenovo ThinkPad X1 (3533), Sony VAIO Z (4563), and Acer Aspire S3 (3429). It can play 1080p video smoothly for the most part, but it stutters occasionally. 720p playback is flawless.

Sound quality from the Series 9 took us aback – in a good way. The twin stereo speakers located close to the lip on the left and right hand sides are surprisingly powerful, and certainly not what we were expecting from such a tiny laptop. The sound is rich and has a wide soundstage, and you’ll be more than happy with the output for watching movies. It’s good for music as well, and while it’s lacking a little in the bass department, it’s a far cry from the usual tin-can-sounding speakers that laptops are typically saddled with. The location of the speakers mean the audio gets muffled if you’ve got the Series 9 on your lap, especially if you’re typing, as your palms end up pressing the speakers down into your lap.

Samsung claims the 4-cell 5680mAh battery is good for 6.1 hours of run-time, but our test had it falling far short of this estimate. Using the Samsung Optimized power profile (which minimises energy consumption on battery power) and setting the screen brightness to 40%, we were only able to squeeze three hours and 45 minutes of web browsing over Wi-Fi before it powered off. It’s not an ideal result, given this is the sort of laptop that you’d want to be able to use for long stretches away from the wall socket – the upside is that it comes with a tiny tablet-style charger that’s easier and lighter to transport along with the laptop.

Conclusion
With the newest 11.6” Samsung Series 9 notebook, Samsung has successfully demonstrated that you can indeed have a sexy ultraportable computer without ripping off the MacBook Air design or charging an arm and two legs like Sony did for the VAIO Z. It’s a beautifully-designed laptop with decent performance, a well-designed keyboard, gorgeous screen and fantastic stereo speakers, but our main reservation is price. With the equivalent MacBook Air and ultrabooks selling for a few hundred dollars less than the Series 9, we think Samsung needs to be more realistic about its pricing model.