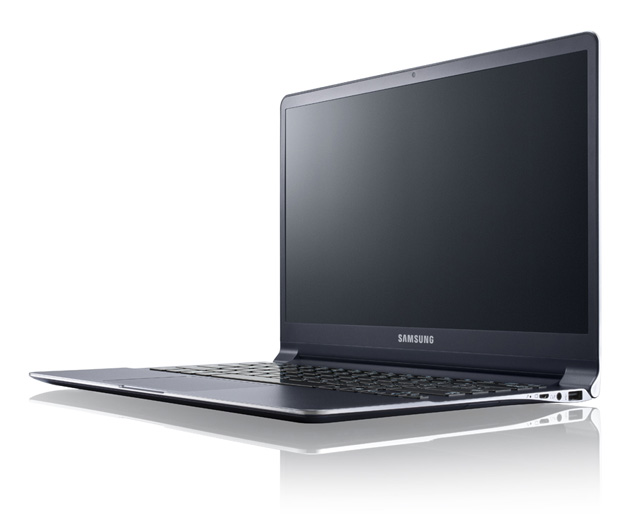 review Samsung’s Series 9 line represents the latest series of thin and light laptops to come out of the Korean manufacturer’s labs. But do these stylish additions to the global notebook market do enough to beat out the competition from rivals such as HP, Dell, Lenovo and Apple? Read on to find out.

Design
Firstly, let me stipulate for the purposes of this review that we’re looking specifically at Samsung’s 13.3″ Series 9 model here. The review model we have is labelled as “NP900X3C-A01AU”, but we’re reasonably certain that this page on Samsung’s site for a slightly different model (“NP900X3C-A02AU”) represents the laptop’s specifications. However as Samsung’s Series 9 range all appear to be designed along the same lines and share some features, we’re going to extrapolate a little here to the entire range.

How many laptops are there in the Series 9 range? Well, Samsung announced two specific models in January — a 13.3″ model and a 15″ model. We’re looking at the 13.3″ model in this review. However, to make things a little confusing, there’s also a previous Series 9 line, with other sizes such as this 11.6″ model. So things are a little confusing. To keep things simple, assume that any broader Series 9 statements in this review only apply to the two new models announced in January. With that out of the way, on to the actual review!

There are three things which are striking about the design of the Series 9 laptop.

When you pick it up, the first impression you’ll get is how minimalistic it is. The chassis of the laptop is composed of aluminium, coloured a neutral dark gray colour. It feels dark, cool, metallic and smooth — kind of like you would expect Batman’s chest armour to feel. The colour scheme reminds us a little of HTC’s recent One Series of smartphones. There’s not much to look at, either on the top of the case or on the bottom (which features a few vents and some little rubber feet to keep the laptop a few millimetres off the surface of a table). In addition, all of the side ports are neatly recessed and out of the way. Overall, this is a laptop which is very stylish, but in a highly muted way. We can’t help but feel that Steve Jobs would approve (blasphemy!).

The second impression which hits you is how light and thin the laptop is. At just 12.9mm thick, the 13.3″ Series 9 has definitely taken a page from Apple’s MacBook Air manual. And it doesn’t weigh much, at just 1.16kg. It feels substantial in the hand, but it’s the sort of laptop you could easily slide into a bag alongside a handful of books or folders, without making much of a dent.

When you open the Series 9′ lid, a new impression makes itself obvious: How little wasted space there is around the screen. Although this is a 13.3″ model, there’s only half a centimetre of wasted plastic on either side of its screen, and a little more on top. The bottom extends to about a centimetre and a half. As with Samsung’s smartphone and TV designs, the company appears to be making war on wasted surrounding material with its laptop screens. The Series 9’s touchpad is larger than we’re used to and feels silky smooth, and its chiclet keyboard feels nice to the touch.

On its left-hand side is its small power plug, next to a USB 3.0 outlet and HDMI port and mini-Ethernet outlet (you’ll need to use the adaptor for this). On the right-hand side sits a normal USB 2.0 port, a 3.5mm headphone jack and a mini VGA output socket. There’s also a subtly recessed memory card reader which takes SD, SDHC and MMC cards.

Overall, the design of the Series 9 really shines. It’s a lovely looking and feeling laptop and we enjoyed playing with it. Perhaps our only caveat is that it may be a little hard to get SD cards into the recessed slot, sitting as it does underneath the laptop slightly. In addition, the Series 9’s aluminium loves to collect fingerprints for its happy little fingerprint collection.

Features
We booted up CPU-Z on the Series 9 and it fed back some nice stats at us. The laptop’s CPU is a dual-core Intel Core i5 model running at 1.7GHz — one of the new Intel Ivy Bridge chipsets. 4GB of DDR3 memory running at 1,600MHz is included and the graphics chip is one of Intel’s HD Graphics 4000 models, which shares the laptop’s main memory (*shudder*).

Storage is supplied through a 128GB SSD drive, while the display is a 13.3″ “SuperBright” model at 400nit brightnes and running at a resolution of up to 1600×900. Thankfully, it’s not one of those nasty reflective types which do so poorly in direct sunlight. A 1.3 megapixel forward-facing camera sits above the screen for videoconferencing, and sound is provided through two speakers at 1.5W each. 802.11 wireless up to the ‘n’ standard is supported, as is Bluetooth 4.0.

Bundled on the laptop with Windows 7 x64 was a moderate amount of crapware … Microsoft’s Bing Bar, something called the ‘Babylon toolbar’ on Internet Explorer, Norton Internet Security, Skype, a thousand and one Intel and Samsung mobile bits and pieces and so on. Most of it appeared to be of dubious value, especially given that Windows 7 tends to come with most drivers you need bundled in. We’d recommend doing a base install of Windows 7 from scratch and seeing how the Series 9 runs. You may avoid a lot of heartache later on if you start from scratch.

We did find the default screensaver set on the Series 9 (a bunch of interlocking bubbles) to be mesmerising, in a way which was reminiscent of Hypno-Toad.

To be honest, there aren’t a lot of differentiating features in laptops in mid-2012, and we’re not surprised by most of the items on this list. Most competent laptops have CPUs of about the speed the series 9 has, memory of about that level, a similar graphics chip and so on. But where different models shine or fail these days is more about how well all of these features are integrated into a more cohesive design — and how they perform.

Performance
There are a lot of things we loved about the Series 9’s performance and a few small things we didn’t.

On the plus side, this is one laptop with a lovely screen. We love how the screen itself extends out very close to edge of its casing, and we love how bright and clear it is. Combined with its non-reflectivity, this made working on the Series 9 or watching movies on it an absolute pleasure. You won’t mind spending all day with this baby.

Secondly, the battery life of the Series 9 is also excellent. We started an encoded movie file of Star Trek: The Next Generation (Episode 6, Season 7: ‘Rascals’) playing on repeat on the laptop and walked away; it lasted for most of the work day. This meant watching Jean-Luc Picard getting annoyed and Guinan being elated at being relegated to a child’s body almost a dozen times. Separately, we fully charged the Series 9 and left it asleep on our desk for more than a week; it surfaced with most of that battery still intact. This is one laptop with a seriously optimised battery, and we’re sure you’ll be satisfied with it. It’s also pretty quick to recharge.

Lastly, the overall performance of the Series 9 is great, for a variety of small reasons. The keyboard is lovely to use, the trackpad is silky smooth, and Samsung appears to have applied some sort of special magic to make Windows 7 boot and wake up much quicker than we’re used to. The latest model Intel CPU means the desktop apps we tested loaded quickly and were responsive.

We did have a few small quibbles with the Series 9. Firstly, we were unimpressed with its sound quality. It can go fairly loud, but it doesn’t have much base, and it feels like Samsung has underinvested in the quality of its speakers here. If you came into a room and the Series 9 was playing music really loudly, you’d probably realise right away that it was coming from a laptop rather than from a dedicated speaker system.

Secondly, there’s the quality of its video card. Those of you who’ve been around the traps will know that it’s pretty hard to get gaming quality video from an on-board video option with shared memory. It is definitely possible with the Series 9’s Intel HD 4000 model, but not if you want to play the latest games at the highest resolutions. This isn’t necessarily a performance issue for the Series 9 per se — if you’re a gamer, you already know all this and you’re probably not buying an ultraportable for gaming, but it’s worth including a small warning here not to expect the Series 9 to be able to run all the latest games at the highest settings. Of course, if you just want to play Angry Birds or Monkey Island, you’ll be absolutely fine, and you shouldn’t have too many problems with older generations of 3D games.

But these are only small criticisms; overall we thought the Series 9 performed very strongly for its featureset, and we were impressed. It was very hard to find anything to complain about at all with the Series 9, to tell you the truth.

Conclusion
Samsung’s 13.3″ Series 9 is a great laptop. It’s got strong features, excellent build quality, and performs well, with the exception of its speakers, which need a bit more bass. According to Samsung Australia’s website, it retails for AU$1,599, which we consider a fairly decent price for this model, especially given its lovely minimalistic sense of style. Bear in mind that the Series 9 won’t be able to keep up with all of the latest games at the highest resolutions and splurge on a decent set of Sennheiser headphones, and you’ll be very satisfied with the Series 9. It’s a very solid and stylish model, and if you’re looking for a thin and light laptop in mid-2012 of about 13″, it should be on your list to consider.

Other reviews of the Series 9 which we liked: CNET Australia, PC World Australia, Engadget, The Verge.