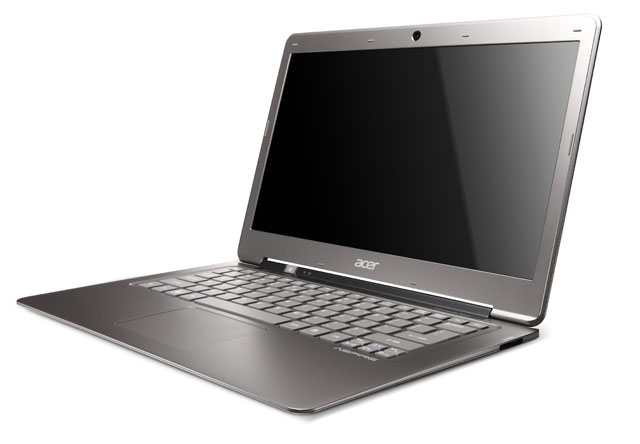 review Intel has a pretty aggressive forecast for ultrabooks. By the end of next year, the world’s largest semiconductor chip maker predicts they’ll make up no less than 40% of the consumer laptop market – a big claim, given the first model only just started shipping.

We could go into detail of all the different attributes that make up an ultrabook, or we could just cut to the chase and call them what they are: Apple MacBook Air clones that run Windows out of the box. First impressions count, and the Acer Aspire S3 is the world’s first glimpse at the ultrabook form factor. Does it herald a brave new world for mobile computing, or is it doomed to failure like Intel’s previous ultraportable effort? Read on to find out.

Design
It’s obvious that Acer has taken its design cues from the MacBook Air. The S3 adopts the same predominantly silver colour scheme, with a black hinge, rounded corners, and buttonless trackpad. Like the MacBook Air, it’s also got a sealed battery, and eschews ‘legacy’ interfaces like an Ethernet port, VGA port and optical drive. But the S3 lacks the X-factor that turns heads. While the MacBook Air is an awe-inspiring slab of unibody aluminium, the Acer S3 is simply a nice-looking laptop whose main appeal is that it’s thinner (13mm) and lighter (1.35kg) than most other machines.

There are some things we like in the S3 design that you won’t find on the MacBook Air. The display folds back exceptionally far to accommodate a wider range of typing positions, and there’s a built-in HDMI port for outputting the S3’s display to modern TVs, LCD displays and projectors. The keyboard is merely ‘okay’ – key travel is a tad too shallow, and the arrow keys in the bottom right corner are absurdly small. A backlight wouldn’t have gone astray, either. Using the touchpad can be a maddening experience; it’s sluggish at the best of times, but it frequently takes a second or two before the mouse pointer starts moving when you go from using the keyboard.

One last gripe before we move onto the features: Acer has chosen to put the HDMI and both USB 2.0 ports right next to each other on the back – a design choice that means you’ll need to resort to using USB extension cables when using peripherals like flash drives and 3G modems, as there isn’t enough room to accommodate them side by side.

Features
The S3 is available in various configurations with second-gen Intel Core i3, i5 and i7 processors and HDD and SSD options. The $1199 entry-level model comes with a 1.4GHz Intel Core i3-2367M processor and a hybrid 320GB HDD/20GB SSD, and our review unit, the next model up, has a 1.6GHz Core i5-2467M processor with the same hybrid hard drive for $1399. All models come with 4GB of DDR3 RAM, Intel HD Graphics 3000 with 128MB of dedicated system memory, a 13” 1366 x 768 display and Windows 7 Home Premium, along with the usual webcam above the screen and 802.11a/b/g/n Wi-Fi. Like the MacBook Air, the S3 also supports the latest Bluetooth 4.0 standard, although this is more of a future-proofing exercise as there aren’t many peripherals that use it yet. A USB 3.0 port would’ve been more useful.

The MacBook Air isn’t the only target in the ultrabook’s crosshairs. Intel’s also going after tablets, and it’s adopted a few of the features that make iPads and the like so appealing. Waiting up to a minute for Windows to wake up from sleep (and longer than that if you’re on a netbook) has been replaced with near instant-on times; in the S3’s case, we were able to open the lid and get back to what we were doing in less than a second. Of course, you’ll need to turn off the Windows 7 login screen (active be default) to take advantage of this speedy resume time, and it also depends on the apps that are currently open.

The other ultrabook innovation the S3 offers is fast re-connection to the Internet. Acer claims it can re-connect to the Internet in 2.5 seconds, but in our tests, it was closer to 4 seconds. Still, this is a lot faster than what most other Windows laptops are capable of (the MacBook Air offered similar re-connection speeds); the Lenovo ThinkPad X1, which is otherwise quite a speedy ultraportable, takes a leisurely 18.7 seconds to re-connect to the last known network. Acer also claims the S3’s battery can retain a charge for up to 50 days once it enters ‘deep sleep mode’, which is 20 days longer than what Apple claims for the MacBook Air.

Performance
The S3’s PCMark Vantage score of 5469 is about what you’d expect from 15” mainstream laptop. This means for everyday tasks like web browsing and word processing, you’re not going to notice any performance difference between using the S3 and using a larger laptop. During testing, we found the S3 to be reasonably responsive; with 10 tabs open in Internet Explorer, a Word document open, music playing in iTunes and a couple of chat sessions going in Google Talk and Facebook, we were able to move between all of the windows smoothly.

Once you start pushing the S3 in the direction of gaming and multimedia, however, the Intel HD 3000 graphics – pretty much a staple on thin-and-light ultraportables – falls short of the performance you can get from a mainstream laptop (most of which come with discrete video cards). The S3’s 3DMark06 score of 3249 is roughly what we were expecting – the Lenovo ThinkPad X1 we reviewed recently (which also has Intel HD Graphics 3000) returned a higher score of 3533, but it also had SSD.

Acer’s claim that the S3 is good for up to seven hours of battery life is wildly optimistic. In our test, which involved setting the screen brightness to 50%, setting the power plan to Balanced, and turning off the power-saving features, we were able to do a mix of Web browsing and word processing for only 4 hours and 40 minutes.

Conclusion
Is this a MacBook Air ‘for the rest of us’? Not really. The Aspire S3 isn’t bad for a Windows thin-and-light, and its fast performance and response times in particular leave us eager to see what the other ultrabook vendors come up with. But the S3 falls short in a few ways that matter, namely mediocre battery life and a forgettable keyboard and trackpad. And if we’re comparing Apples to Acers, the S3 is a pale imitation that lacks the beautiful engineering and build quality of the MacBook Air.

Considering the S3 is only $50 cheaper than the base-level 13” MacBook Air (which offers useful extra features like a back-lit keyboard, higher-resolution display, faster processor and 128GB SSD), we reckon you’d be better off with the Apple notebook and getting an OEM version of Windows 7 on eBay for a hundred bucks.