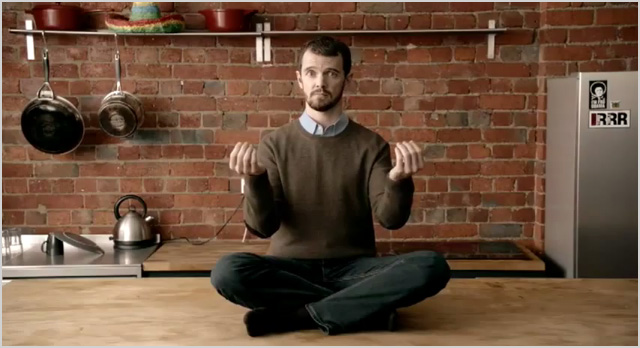 news The industry self-regulatory body governing television commercials has withdrawn approval for an iiNet advertisement to be shown on television, following revelations the ad contained subliminal advertising communicating a hidden message to viewers.

The Sydney Morning Herald revealed on Wednesday that the ad — featuring iiNet’s long-running ad character Flinn — contained a message which only appeared for several frames in the ad, exhorting viewers to visit a link on iiNet’s web site for a free gift. “And hey, watch for more two frame freebies in our next TV campaign,” the notice read. The ISP confirmed this morning that Commercials Advice — part of FreeTV, the industry group which represents free to air television broadcasters — had withdrawn its permission for the ad to be shown.

In a post on iiNet’s blog yesterday, the company’s general manager of retail sales & marketing Matt Dunstan wrote that iiNet had decided to insert the subliminal text into its ad “for a bit of fun”. Some 4,400 viewers had found the hidden message and had visited the message, he wrote.

“They were pretty happy with themselves and that was about as far as it went, at least up until yesterday,” Dunstan wrote. “That was until the rest of the world caught on to our little bit of fun and the online conversation buzzed. Some people were discussing whether it was ‘subliminal advertising’, others thought it was ‘just a bit of fun’, others said it was ‘marketing genius’ – I liked the last people the best.”

However, Dunstan added, he wanted to clear the air and note that iiNet didn’t insert the hidden message to break the law or create “social buzz”.

“We love the fact that we can now have ongoing dialogues with our customers. This was just another way of doing that. We will, actually, we PROMISE to continue to do things differently to the other guys and to find ways to show that at iiNet we’re passionate about what we do and that there is a better way (and sometimes it’s even fun as well!).

And, Dunstan added: “You’re going to watch the next iiNet ad more closely now, aren’t you!PS – there is no subliminal message contained in this blog post… or is there?”

opinion/analysis
Frankly, I am pretty disturbed by this one. iiNet and many others in the community may have just viewed this as “a little bit of fun”, but there are serious reasons why subliminal advertising is banned. It’s a manipulative technique which takes advantage of the limits of human ability to consciously process information, and I’m surprised iiNet would do this kind of thing.

If you want to have a bit of fun with your audience and create interactivity and engagement, there are plenty of above board ways to do it — and yes, that includes the creation of so-called hidden ‘easter eggs’ in your content.

But slipping hidden frames in your TV advertisments falls squarely on the side of “evil”. We find Finn creepy enough without this kind of thing going on as well. And yes, iiNet, you’re right — quite a few people will be watching your next set of ads more closely … to determine whether a formal complaint should be filed with the Australian Communications and Media Authority.

Watch the ad below on YouTube (although it doesn’t seem to be possible to view the hidden frames):