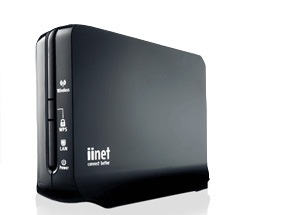 The flow of consumer electronics products emerging from the fledgling laboratory operation of national broadband provider iiNet shows no signs of stopping, with the company this week announcing it plans to shortly bring a ‘wireless bridge’ product to market.

According to a post on the company’s blog, the device sits between an ADSL modem on one end and any device on the other end which requires an Ethernet connection, using the 5GHz wireless spectrum to stream data without cables. It could be used, for example, to connect devices in a customer’s loungeroom, such as an Xbox or set-top box, to a broadband router located across the house.

iiNet senior product development manager Anthony Malone (it’s not clear whether there’s a relationship with iiNet managing director Michael Malone) wrote on the blog that iiNet saw its development of the Wireless Bridge product as being complementary to the company’s existing BoB range of ADSL routers and its set-top box service, which it has launched in coalition with partner FetchTV.

“Our aim for the Wireless Bridge was to have it fit in with our existing products in every way possible,” he wrote, “from perfecting the firmware, right through to making sure its aesthetics match the sleek black BoB and FetchTV set-top boxes already living in people’s homes – hey, we all like our appliances to match don’t we?”

“We look at this as closing a chapter in a way. We created the modem, then we brought out the set top box, now we have a bridge between the two to complete the Internet Protocol TV (IPTV) product suite. However we’re far from finished with our ideas on IPTV. I can’t mention much now but we’re well aware we’ve only scratched the surface on this new breed of subscription television. With the National Broadband Network on its way, the pipe will only become bigger and there is no limit to the services we could offer in the future.”

The news comes as iiNet increasingly appears to be attempting to differentiate itself from rivals like Internode, which offer very similar products to customers — including the FetchTV service. In another post on the company’s blog entitled “iiNet’s FetchTV service a clear leader,” iiNet content team manager Robert Buckler wrote last week that it was no surprise that other ISPs were “now following suit” when it came to FetchTV, noting that Internode and Optus had recently launched the service.

While the ISP’s competitors “are just catching up with the latest trends in technology”, Buckler wrote, iiNet had already inked a number of deals with content providers — such as arrangements with the Manchester City and Chelsea football clubs to watch games, as well as access to content from the ABC and other partners.

Ultimately, he wrote, the ISP would “work with fetchtv to ensure our products stays a head above the rest”.