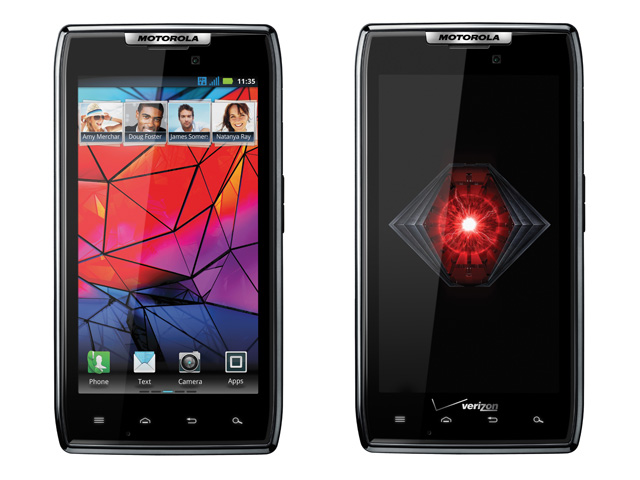 news Thinking of buying an new smartphone based on Google’s Android platform? You may want to hold off for a while. It was revealed this week that a number of new high-end Android devices are slated to hit Australian mobile carriers Optus and Vodafone over the next few months — as well as through third-party suppliers.

Perhaps the biggest new handset launch announced in Australia this week was the news that the reboot of Motorola’s legacy RAZR line, based on Android, will be coming to our shores exclusively through Optus in November this year. The phone (pictured above) comes with a 4.3″ Super AMOLED display covered with Corning Gorilla Glass, Kevlar fibre coating on the back, 1GB of RAM, a dual-core 1.2GHz CPU and version 2.3.5 (Gingerbread) of Android. The phone’s eight megapixel rear camera allows the capture of 1080p HD video, and image stabilisation technology is included.

“The original Motorola RAZR was an iconic phone synonymous with sleek, stylish design and quickly became an object of desire. Now we’ve done it again by creating the next impossibly thin smartphone – a head-turning design with the power to carry your life with you,” said Timo Brouwer, managing director of Motorola Mobility in Australia. “We know Optus customers in Australia will be lining up to be the first to have the next generation Motorola RAZR.”

Gavin Williams, Consumer Marketing Director, Optus said, “The Motorola RAZR is a remarkable handset that blends impressive technical advances with a unique set of design features. The striking materials used in this model set it apart from the crowd and we think the Motorola RAZR will really resonate with our Optus customers. The Optus Open Network is the perfect platform for Australians to get the best out the Motorola RAZR and we’re excited to bring the power to Optus customers exclusively.”

The RAZR will launch in Australia for zero dollars up-front on Optus’ $59 monthly plan. A hand-on demonstration of the smartphone can be seen at US site This Is My Next, which described the phone as “super, super-thin” with “pretty gorgeous” hardware.

Along with the RAZR, the other top of the line Android handset to be revealed internationally this week is Samsung’s Galaxy Nexus — the Google-branded successor to the Nexus One and Nexus S. Previously rumoured to be known as the Nexus Prime, The Galaxy Nexus will be the first device to run version 4.0 of Android (Ice Cream Sandwich) and will feature a 4.65″ Super AMOLED curved glass display with a resolution of 1280×720.It will feature a dual0core, 1.2GHz CPU, 1GB of RAM and a 5 megapixel rear camera.

While Australian availability on the Galaxy Nexus hasn’t been announced yet, the handset will start shipping locally from third-party retailers Mobicity and Kogan in November, the companies announced this morning.

We haven’t yet been able to verify the details with Vodafone, but CNET.com.au reported yesterday that the carrier would launch a range of new HTC handsets in the weeks leading up to Christmas – ranging from the Sensation currently available only through Telstra, to the Sensation XE and XL and HTC Explorer.

The original HTC Sensation is already one of HTC’s top of the line handsets, but the Sensation XE ups its specifications slightly. The XL is a slightly different model — with a larger screen but a less powerful CPU. In comparison, the Explorer is more of a budget model.

opinion/analysis
It’s an amazing time to be in the market for an Android handset. Out of the bunch currently available, we like Samsung’s Galaxy S II and HTC’s Incredible S and Sensation the best, but it sounds like if you’re in the market for an Android phone, you had best at least wait a month or so to see what happens with the Galaxy Nexus and new Sensation models locally … as well as whether the reviews of Motorola’s RAZR see it playing tough with the big boys.

Either way, most of these devices are slated to hit Australia before Christmas.