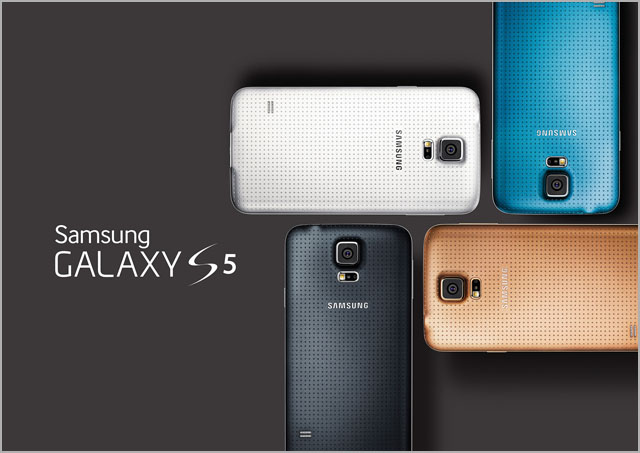 news Samsung’s flagship Galaxy S5 handset revealed overnight at the Mobile World Congress conference in Barcelona is set to be offered by all three of Australia’s major mobile telcos, although the Korean manufacturer has not yet confirmed any pricing or availability details for the device’s Australian launch.

The handset introduces a number of new features to Samsung’s popular Galaxy S line, as well as consolidating existing popular top-end features included with previous models. It comes with a 5.1″ Super AMOLED screen running at a resolution of 1920 by 1080, a 2.5GHz quad-core application processor, version 4.4.2 of Google’s Android operating system, a 16 megapixel rear and 2 megapixel front camera, support for the Category 4 standard for 4G/LTE speeds (supporting download speeds of 150Mbps and upload speeds of 50Mbps) and an in-built fingerprint reader.

The device is also dust and water resistant up to the IP67 standard, comes with 2GB of RAM and 16 or 32GB of storage space, as well as support for a microSD card up to 128GB. The handset weighs 145g, and its battery life has also been substantially improved over the previous model, the Galaxy S4. The back cover of the S5, which is still removable, departs from the previous soft plastic feel of previous models and is now more leathery, not unlike Google’s Nexus 7 tablet or Samsung’s own Galaxy Note 3 handset. It will be available in four colours, including “charcoal black, shimmery white, electric blue and copper gold”.

In its global statement, Samsung said the device would be available globally through the company’s retail channels, e-commerce and carriers in April. Locally, Samsung Australia issued a statement saying:

“The Samsung GALAXY S5 is an extremely exciting smartphone that we look forward to bringing to Australians. Building on the pedigree of our flagship GALAXY brand, a hallmark of Samsung’s quality and innovation, the GALAXY S5 continues our legacy of delivering mobile devices that help enrich the lives of our customers. With a range of compelling features, the GALAXY S5 will be well-suited to the Australian way of life. Australian pricing and availability for the Samsung GALAXY S5 will be announced at the time of the local launch.”

Both Optus and Vodafone have already confirmed they will offer the Galaxy S5 in Australia, and it is believed that Telstra will do so as well. New additions to Samsung’s wearable technology range have also been announced: The Gear 2 and Gear 2 Neo smartwatches and the Gear Fit wristband.

Early previews of the Galaxy S5 have been broadly positive. The Verge wrote that Samsung had a successful formula with its previous S4 model, and for the most part, it appears that the company has retained that with the S5. “Things are faster, nicer feeling, and easier to use, but it’s still a Samsung smartphone through and through, and will likely be just as successful if not more so than its predecessor,” the publication wrote.

Engadget wrote in its own preview: “All told, it’s very much a run-of-the-mill Galaxy S flagship, but there are enough new hardware features and software tweaks to make it feel fresh.”

opinion/analysis
It is increasingly obvious that there are only a small number of handsets which actually sell in any decent volumes in Australia. The iPhone is one and Samsung’s Galaxy S line is another one. If I see people using their phones in Sydney, it’s usually a model from these two lines. In this vein, I expect the S5 to be very successful, although it doesn’t look as though Samsung has made many substantial changes here from the S4.

I would actually advise many readers interested in the S5 to keep an eye out for rapid price drops on the S4 instead, or perhaps the Galaxy Note 3, as I’m not sure that Samsung has really done enough here with the S5 to differentiate it from the S4, already a stellar handset. Personally, I’m more excited at this point to see what Samsung does next with its ‘phablet’ line, the Note series. The Note 3 was an incredible model and a huge step up from the Note 2. It will be interesting to see what’s new in the Note 4.