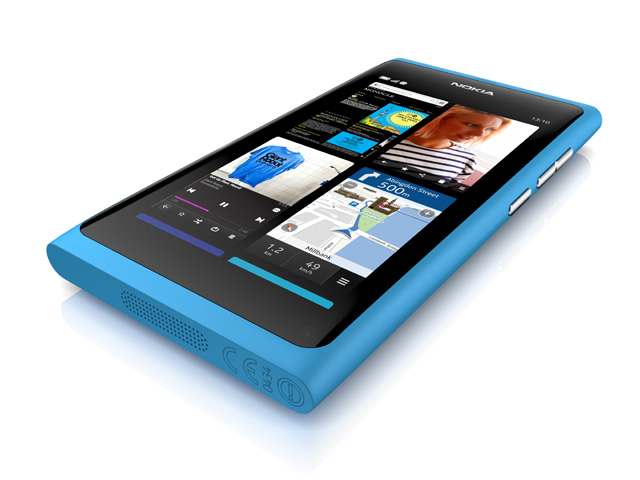 review Nokia has made an odd, albeit expected, detour in its transition to Windows Phone 7. In its bombshell announcement in February that it would ditch Symbian as its primary smartphone platform, Nokia mentioned – almost as an aside – that it would also be shipping “a MeeGo-related product” later this year. That time is now, and that product is the Nokia N9. It’s the most significant device that Nokia has launched since the N95, but given that it’s running a mobile platform that’s yet to prove itself as a contender, is it enough to make a real impression?

Design
We’re won’t beat around the bush here: the N9 is the best-looking smartphone we’e ever seen. At first glance, it looks like a giant fourth-gen iPod nano (minus the clickwheel), particularly in the brightly-coloured magenta and cyan versions (it’s also available in black). We got the cyan version in for review, and it’s such a gorgeous shade of blue that we’re now convinced we want all of our gadgets in this exact colour. Seriously. The colour is bled into the polycarbonate casing all the way through, which means that even if you scratch it, the colour underneath is the same. It even comes with a rubber case in the box that matches the phone’s colour exactly.

The charming colour options aren’t the only thing we like about the N9. The seamless unibody casing beats even the iPhone 4 in its simplicity, with only three buttons altogether for power and volume, and no visible screws. The internal battery means there’s no fiddly back cover either; instead the micro-SIM card fits into a slot at the top of the phone, protected by a sliding panel. This sits next to a micro-USB sync/charge port that’s hidden behind a flap. The only visible port is the headphone jack on the top left corner.

The unibody design, rounded edges, and relatively narrow dimensions (61.2mm across – only a couple of millimetres wider than the iPhone 4/4S) make the N9 lovely to hold, and it’s just as nice to use thanks to the curved glass display that extends from edge to edge. This is protected by scratch-resistant Corning Gorilla Glass that’s been treated with an anti-glare polariser to enhance outdoor visibility.

Features
As if there weren’t enough smartphone platforms on the market, the N9 adds yet another a player to the mix in the form of MeeGo 1.2 Harmattan. It’s a big improvement over Symbian^3 (although that isn’t exactly a high benchmark), and offers almost everything you’d expect in a modern smartphone OS, including an app store, push email, a HTML5 web browser, notifications and multi-tasking. You can also cut, copy and paste, close apps, and use the N9’s 3G connection to create a wireless hotspot.

Navigation through the simple yet good-looking interface is slightly different to what we’re used to, with three screens – an apps launcher, events view (system notifications and social network updates) and running apps – that you can move between by swiping across the display. The lack of homescreen and dedicated home and back buttons simplifies thing to a certain extent, but it also means there’s no fast way to make a phone call or launch the camera or a particular app quickly – you simply have to keep swiping until you get to the apps launcher.

MeeGo 1.2 is quite similar to webOS (and to a lesser extent, Android) in the way it integrates various online services at a system level. The range of services it supports is impressive, including Twitter, Facebook, Skype, Google, Flickr and YouTube. That said, it doesn’t go quite as deep as webOS. Email, calendar, contacts and messaging are unified across the various services, but photo albums and phone calls are phone-specific only.

The N9 isn’t just a pretty face when it comes to hardware. There’s a single-core 1GHz Cortex A8 processor, 1GB of RAM, and either 16GB or 64GB of internal storage (no microSD expansion). All colour options are available in the 16GB size, but the 64GB version is available in black only. Unlike it’s Symbian^3 predecessor, the N8, it doesn’t have built-in HDMI or USB OTG, but it does have an NFC chip that lets you pair it with other NFC-enabled devices (like the Nokia Play 360 speaker) by just tapping the two together.

The 3.9” display has a relatively high screen resolution of 480 x 854 pixels, and it uses AMOLED technology to produce vibrant colours and black levels that are so deep that the black background making up most of the UI is practically indistinguishable from the surrounding black bezel. The camera specs are pretty impressive as well, between the 8-megapixel stills, Carl Zeiss Tessar optics, large f2.2 aperture and 720p HD video recording. Other tech goodies include a pentaband 3G and quadband GSM antenna, 802.11n Wi-Fi, A-GPS and Bluetooth 2.1 + EDR.

Performance
Perhaps we’ve been spoiled by all the dual-core smartphones we’ve been testing recently, but the Nokia N9 just doesn’t feel as snappy as we’re used to. There are some areas where the N9 feels extremely responsive, such as displaying and unlocking the lockscreen, swiping between screens and scrolling through a page, but launching an app can take up to five seconds, and the touchscreen occasionally fails to respond to input – we had to tap three or four times before it would snap into action. We also received ‘app not responding’ errors a few times when using the built-in Facebook app.

The web browser uses Webkit 2 technology and supports HTML5, but Adobe Flash is conspicuously absent. You can have multiple pages open at once, although it doesn’t use a tabbed interface for moving between them – you have to go to the running apps screen to switch between sites. The usual actions like scrolling, panning, and zooming in and out of a page are all fluid, and while it loaded the SMH website in a leisurely 26 seconds (compared to 12 seconds using an iPhone 4 running iOS 5), most of the page loaded a lot sooner than that, and you can start interacting with the site almost instantly.

The N9‘s eight-megapixel camera is fairly typical for a smartphone in that it takes decent pictures outdoors in natural lighting, but it’s noisy for indoor and night shots. The camera app takes 4-5 seconds to open, but it’s fast to auto-focus and even faster to snap photos. The camera can also shoot 720p HD video, and again, it’s no better or worse than average. The N9 has a front-facing camera that’s rather oddly-positioned in the bottom right-hand corner, but we’re baffled as to what it’s there for – there’s no option in the Camera app to switch to the front camera, nor is there an option to make video calls over 3G or Skype.

The Music app is gorgeous, with large album art in the Now Playing screen, intuitive navigation controls and a built-in recommendations engine that suggests music you might like – this links through to the Nokia Music Store, which has pricing comparable to iTunes. Sound from the external speaker is nice and loud, with no distortion at maximum volume – although bass is almost non-existent and there are no equaliser options. Our main gripe is that there’s no quick way to jump back to the music player when you move to another app. Once again, you’ll need to keep swiping until you get to the running apps screen and tap on the music player thumbnail – it would’ve been nice to have easy access to music controls from the drop-down settings that appear when you tap the top left-hand corner of the screen. The Video player supports most codecs, but it struggled with our 720p MKV file, displaying the video like a picture slideshow.

Not surprisingly, the Ovi Store on the N9 is something of a ghost town at present, so you can forget about finding popular apps like Amazon Kindle, Evernote, WhatsApp, IMDB or Dropbox. The N9 comes with a decent collection of apps out of the box, including Facebook, Twitter, YouTube, Angry Birds, AP Mobile and Documents (read-only), but it’s slim pickings outside that selection. It looks a lot like the Android Market did in the early days, with a lot of simple novelty apps and not a lot of substance. You can, however, install apps outside of the Ovi Store by downloading them through the web browser, and there are a few online MeeGo repositories that offer apps specifically for the N9.

Overall, we came away quite impressed with MeeGo 1.2 Harmattan. Compared to the early releases of iOS, Android and Windows Phone 7, it’s remarkably slick and full-featured, with most of the fundamentals covered, and quite a few advanced features as well. Of course, there’s always room for improvement. The on-screen keyboard works well, with subtle haptic feedback whenever you press each key, but we would’ve preferred an auto-correct feature over the existing system, which presents a word suggestion as a pop-up that you have to manually tap on. Strangely, the events screen doesn’t show your entire Twitter and Facebook news feed, but perhaps one out of every four updates, and the Exchange email account that we set up was inconsistent about pushing out new email.

Missing features we’d like to see in a future update include smart dialling from the phone app, threaded email, better landscape display support, universal search, and the ability to post photos to Twitter. Whether Nokia continues to support the N9 with software updates – and to what extent – isn’t clear, but given the majority of its smartphones will be running Windows Phone 7 in the near future, we’re not optimistic.

The N9‘s battery life is better than expected; with medium use (a handful of calls, text messages and photos, a Microsoft Exchange account syncing in the background, and around 45 minutes worth of web browsing through the day), it lasted for just under 26 hours.

Conclusion
The 16GB and 32GB Nokia N9 models are available for the same price as the equivalent iPhone 4S models ($799 and $999 respectively), and that pricing parity is the N9’s biggest weakness. Why would anyone buy an N9 when they can get an iPhone 4S, with its considerably larger app selection, better camera, and a tried-and-tested operating system with sophisticated extras like iCloud, Siri and AirPlay? Power users are likely to ignore both phones in favour of Android; the only users we can see opting for the N9 are those that are won over by its distinctive good looks or those that are ideologically opposed to an iPhone.

In a sea of me-too devices, the N9 stands out as something fresh and different, and Nokia has once again proven that it’s a master of hardware engineering. But the N9’s hardware isn’t the problem – it’s the MeeGo operating system that it runs. No, it’s not a dog of an OS like Symbian^3 – it’s actually optimised for touch and has most of the ingredients of a new-age mobile platform. Its problem that it’s just come too late to the party. There are too many other compelling – and mature – mobile platform options that already cater to all the different types of users, and with Nokia moving to Windows Phone 7 next year, the future of the N9 is cloudy.