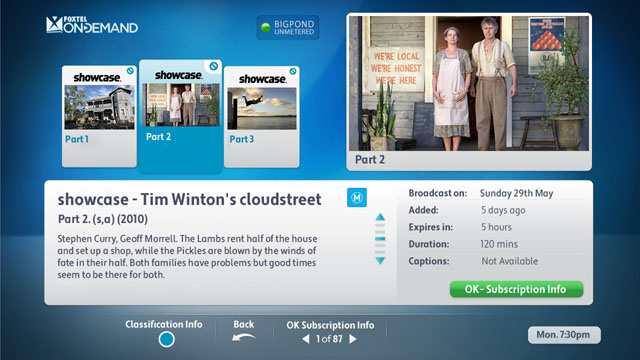 Telstra’s T-Box IPTV set-top box will receive a fresh injection of content next week, with the telco revealing today that significant amounts of content from its Foxtel pay TV joint venture would be available on the T-Box from 27 June.

The planned integration of Foxtel content on the T-Box has been known about for some time, but Telstra has waited until today to disclose the actual pricing on the service. Foxtel will initially only be available to T-Box customers who are connected to Telstra through its HFC cable network, although BigPond ADSL customers are to get access to the service “in the months ahead”. Downloads over the service won’t affect customers’ quota. The T-Box is only available to customers using Telstra’s broadband services.

Telstra customers with a T-Box will be able to sign for five different packages to use the service.

The ‘Get Started’ package will offer customers eleven channels, including FOX 8, MTV, Nickelodeon, Discovery, the National Geographic Channel, Channel [V] amd Lifestyle YOU, and go for $19.50 a month. A $10 per month ‘Sport’ package will include FOX SPORTS Play, ESPON and FUEL TV (four channels), while a $15 ‘Entertainment’ package will include eleven streaming channels such as The Comedy Channel, Disney, SCI-FI and UKTV.

In addition, a $15 ‘Movie Network’ package will be available, featuring two streaming channels (Movie One and Movie Two), plus catch-up movies from eight movie channels, including the Starpics, FMC and Movie Greats channels. A $15 ‘Showtime Movies’ package will round out the offering, featuring two streaming channels, Foxtel’s showcase and showtime premier options, and catch-up movies from seven channels, including showtime comedy, action and family.

Customers will need to sign up to the ‘Get Started’ package to get the Foxtel service initially, before being able to bolt-on additional packages after that point. Unlike the normal Foxtel service, there are no long-term commitments necessary to use Foxtel on the T-Box.

Telstra executive director of Media J-B Rousselot said three out of four T-Box customers were families, so the telco had designed the Foxtel service on the set-top for with “value for money, quality home entertainment and flexibility at the top of the list”.

The news comes as options for access to online content are rapidly expanding in the Australian marketplace. A number of internet service providers, including major companies such as iiNet and Internode, are now retailing the FetchTV IPTV offering locally, while Foxtel is also available through Microsoft’s XBOX 360 platform, although downloads through the Xbox count towards customers’ quotas, unlike with the T-Box.

Ovum analyst Tim Renowden this morning said in a statement that the new T-Box Foxtel offering gave Australians a lower-cost option for pay TV, but was likely to continue Foxtel’s dominance of the local market.

“Foxtel hopes to attract new subscribers, particularly younger customers and renters who are frustrated by long contracts, or those who can’t afford a full Foxtel subscription,” he said. “Telstra will use the service to encourage its customers to take up a bundle fixed line services (fixed voice, broadband and subscription TV) and reduce customer churn to aggressively-priced competitors.”

“There is a risk of existing Foxtel customers switching to a T-Box service to reduce their costs,” he added, “but Foxtel will be hoping the more comprehensive channel packages, HD channels and some extra features such as PVR functionality will discourage most existing customers from downgrading.”

Renowden also noted that Telstra would need to carefully monitor its content delivery network to balance out customer demand for video services online against network capacity. The delays in the rollout of the Foxtel service to ADSL customers, the analyst said, were essentially a bid to ensure Telstra’s CDN infrastructure had the capacity to deliver a quality service.

“Any network performance issues will be unacceptable for paying customers,” Renowden said, “so this launch will provide a crucial test of Telstra’s ability to deliver streaming video to a mass audience over its broadband network.”