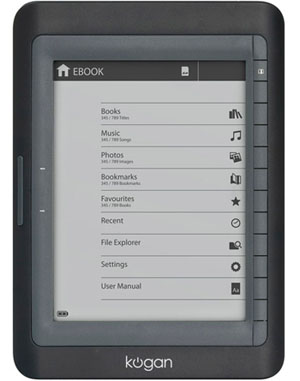 Taking a page out of Apple supremo Steve Jobs’ book, Melbourne-based Kogan Technologies this morning launched what it dubbed as a “magical and revolutionary” eBook reader with a 6″ e-ink screen.

The price slightly undercuts Borders’ Kobo eReader, which sells for $199 locally as well as Amazon’s Kindle, which it will ship to Australia for a price of around $215.

“We’re seeing eBook readers dropping in price, but many are still far too expensive for mainstream use,” said the company’s founder Ruslan Kogan in a statement. “When you have these devices up to and above $500, you’re really asking too much of Australian consumers.

“Most importantly, it’s open-market technology. This device isn’t tied down to one content provider. Anyone is free to buy this, and download or buy eBooks from almost any online store and view them on our device.”

The Kogan eBook reader has a 16 level grayscale e-ink screen, similar to other devices, and is less than 1cm thick. It comes with over 1,500 free eBooks — most of which are out of copyright classics. But unlike most other free eBook catalogues, Kogan has included several classic Australian authors on its list — such as Henry Lawson, famous for titles like The Romance of the Swag.

According to Kogan, its eReader will synch with Adobe’s Digital Editions software for managing eBook libraries, and will support some 16 eBook file formats — including popular formats such as PDF, ePub, text, HTML and RTF files and so on.

The reader is based on the Linux operating system and has 2GB of in-built memory, which is expandable to 32GB via a SDHC memory card. It also supports the MP3 audio format and has a 3.5mm standard headphone jack. Its display resolution is 800×600 and it has a battery life of 10,000 screen refreshes.

The news comes as eReading continues to take off in the Australian market — with significant interest from consumers in the new platform and authors considering how it will affect the way books are distributed, as well as the economics of the publishing system.