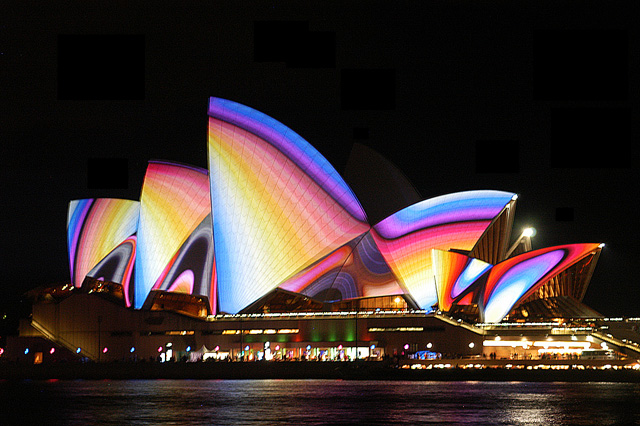 The epicentre of the buzz is located on the show floor in the voluminous cavern of Sydney’s Exhibition Centre, where hundreds of technology companies and other organisations have spent mega-dollars on huge glamorous stalls proclaiming their wares.

Dell’s mini-ampitheatre is hosting talks on scalable storage and handing out free showbags while a barista makes visitors premium coffee. A bevy of yellow and black clad eWay consultants are swaming like bees around customers, under a brightly coloured sign proclaiming the presence of security vendor AVG.

The police have parked a huge truck marked “Police Forward Command Post” in one corner, while the Federal Government went one step further, with an entire semi-trailer across the hall displaying piles of brochures. In another corner one company has hauled in a huge mobile datacentre in a box, while another has installed racks of live servers complete with cooling. A third has a rainbow display of multi-coloured Ethernet cables in every colour.

HP, D-Link, Acer the NSW Government, Pronto Software, the list goes on. Everyone’s here — and business is frenetic. And if you widen the net a little further, things get even more interesting.

Across the hall, grizzled telco veteran Paul Budde is expounding his views on the National Broadband Network, waving his arms around excitedly as his eyes light up with his vision of the future. In a conference room, Department of Human Services deputy secretary for ICT infrastructure John Wadeson’s voice is filled with passion and wry humour as he shows how Centrelink used a room full of laptop PCs and a 3G mobile broadband connection to distribute close to $1 billion worth support payments during the Queensland floods.

In the Webciety section of the floor, startup luminaries like PushStart co-founder John Haining are holding court, while investors mix with the latest generation of entrepreneurs; product directions and funding connections being made on the fly with a speed which Silicon Valley would envy. Local cloud startup OrionVM stayed up late to push its version 1.1 upgrade live and then went straight into CeBIT mode. “I could do with more sleep”,” the company’s Twitter account says. No kidding.

And that’s not all.

Across town in the same week, the ICT industry takes over the Sydney Opera House not once, but twice — for the launch of the NSW Government’s Digital Sydney project, and then to launch CeBIT itself.

With the Opera House clad in the spectacular digital illumuniation of Vivid Sydney (sponsored by chipmaker Intel), Deputy Premier Stoner announces funding for 20 new ICT projects, while later on Spreets co-founder and dot com multi-millionaire Dean McEvoy rants passionately about the local availability of venture capital. Later, Foreign Minister Kevin Rudd hosts his counterparts from Germany, welcoming them to Australia and to CeBIT in their native tongue.

But that’s still not all.

Arriving at the corporate headquarters of the National Broadband Network Company in North Sydney, journalists are greeted by Ericsson Australia chief Sam Saba, his broad grin giving a premonition of the $1.1 billion contract he will sign moments later with NBN Co corporate services chief Kevin Brown.

Brown also can’t contain his glee at signing the Ericsson deal and a second billion-dollar contract with construction firm Silcar, cracking jokes about the “official, government-funded pen” he’s using to ink the contracts. And that same day, Telstra reveals it’s making significant progress on one of its own fibre rollouts — the new installation in South Brisbane.

Now, you might say what this hive of activity represents is just the output of a successful conference — CeBIT — which has drawn the industry out of its cocoon for one week of glamorous flight. However, the truth is that what’s happening this week in Sydney is just the tip of the iceberg.

In reality, right now a perfect storm of multiple forces is converging on Australia’s technology sector. And those forces are arriving both from the top down and the bottom up.

At a top level, the incredible amount of funding and attention which the Federal Government is ploughing into the NBN and the ‘Digital Economy’ is starting to have a dramatic effect on the entirety of the Australian business and government sectors. For the first time in many years, governments at all levels around Australia are starting to put their focus squarely on developing the nation’s ICT sector, and business is responding as initiatives are blossoming everywhere.

Simultaneously, there is genuine technological change going on both in the consumer and business sectors, as devices like iPads and services like cloud computing are literally revolutionising overnight the way that Australians live their lives. And Australia is living up to its international reputation as an early adopter nation and is embracing that change wholesale.

Lastly — and this cannot be underestimated — is the impact of the startup community.

Fuelled by a growing swathe of web incubators like Pollenizer and the technological change going on, hundreds of Australian technology startups are emerging and growing fast. And the investor community is reacting, with huge buyouts and IPOs and many, many small investments now taking place — in a local community where they used to be a rarity.

The innovation is now here — and the money to fuel it as well.

In her recently published book Dot.Bomb Australia, journalist Kate Askew charted the rise and fall of Australia’s first dot com revolution, telling incredible tales of boom-town fortunes being made by individuals like Malcolm Turnbull, and the rags to riches to rags up and down fortunes of companies like One.Tel. Those were heady days. In the book, I was struck by a quote by Treasury Secretary Ken Henry, who was musing about the future of the technology sector.

“I sometimes get the impression that some people believe the information and communication technology revolution ended with the collapse of the dot com bubble earlier this decade,” Henry told a group of business leaders in Queensland in late 2009. “Instead there are very good reasons to believe that we have only just begun to see what the information and communication technology revolution promises.”

I’ve been a technology journalist in Australia now for the better part of a decade, and for most of that time, technologists have prayed fervently for governments, businesses, and their fellow residents to give technology and the technology sector the attention it deserves — the attention that will allow technology to fulfil its potential of changing the world.

Well, now that time is here.

For Australia’s second technology boom is upon us, and things will never be the same again.