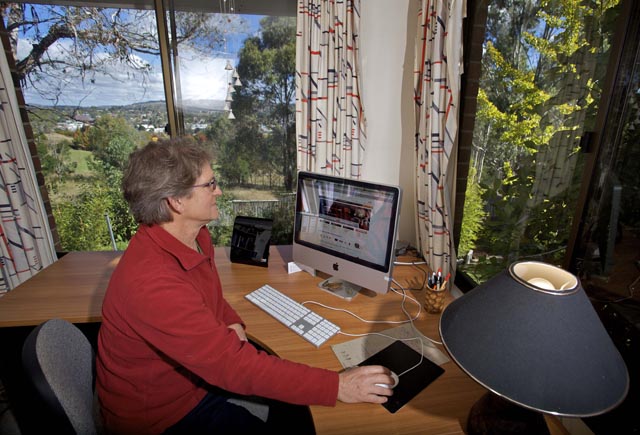 The Federal Government this morning claimed it had “made history” after it officially launched live services on its flagship National Broadband Network project on the mainland, in a ceremony attended by Prime Minister Julia Gillard, Communications Minister Stephen Conroy, independent MP Tony Windsor and a host of other parties associated with the telecommunications sector.

“Prime Minister Julia Gillard made history today after officially launching the National Broadband Network for the first time on mainland Australia,” the Government said in a statement associated with the launch in the Northern NSW city of Armidale.

A number of residents in Armidale have been connected to the NBN already for about a month, with a number of locals reporting in mid-April that their connections had gone live, with early entrant service providers such as Primus and iiNet connecting customers up. However the NBN’s mainland launch had not until today received its formal send-off.

The Armidale footprint will ultimately reach almost 5,000 premises — including the University of New England, with about 2,900 premises covered if the university’s grounds are excluded. And despite the fact that the rollout so far only covers a small number of those premises, the take-up rate has been significant — at 87 percent, one of the highest in the nation.

Gillard said the NBN would address the digital divide in the bush, where less people used the internet. “It means people can stay in their home town and still get access to the health services, education and training and business opportunities that people in our capital cities take for granted,” the Government’s statement said. “Importantly, increased education, training and business opportunities means more jobs in local communities.”

The premises who are receiving services in Armidale are part of an early trial of services in the region being conducted by internet service providers iiNet, Internode, iPrimus and Telstra. Commercial services are slated to start from September with a wide tranche of other providers to join the network — namely AAPT, AARNet, Comscentre, Exetel, Nextgen Networks, Optus, Platform Networks, SkyMesh and Vodafone Hutchison Australia.

Armidale is one of five first release sites where the NBN is rolling out on mainland Australia. The other sites of Kiama Downs and Minnamurra (NSW), Townsville (QLD), Willunga (SA) and Brunswick (Vic) will begin offering services progressively over the coming months.

ISPs and customers
A number of the participating ISPs also released statements this morning detailing their own participation in the project.

iiNet general manager of retail Matthew Dunstan said the company had two customers in the Armidale trial who were already enjoying the upgraded services. One, Peter Erskine, is a research assistant at UNI and a school teacher who predominantly works from home, while the other, Byron Miles, is a computer science student at the university.

“The speed is just incredible. What used to take over an hour now takes less than a minute,” said Miles in iiNet’s statement. “Also, everyone at home can use the Internet at the same time without the speed slowing as it did before.”

Rival ISP Internode said its first two mainland NBN customers were IT professionals Stephen Stroud and Owen Hedger, who both also praised the NBN in a statement issued by the ISP.

“For business, the NBN is going to be an absolutely boon – it’s phenomenal,” said Stroud, an IT manager. “Back in the old days, we needed three ISDN lines, with a combined capacity of 384 kilobits per second, to run a videoconference – which was fine as long as we didn’t have too many people and no one moved much. Now, with 100 meg down and 40 meg up, everyone can move and talk to each other in a great quality videoconference using a service like Skype. All you need is the right equipment at each end.”

“That’s phenomenal for anyone trying to run a business, particularly in regional Australia. That quality of communication allows people to become much more productive.” Hedger — a staffer at an Armidale computer repair store, said he used his NBN service to gain remote access to the office from home, and it was more like being on a local area network than on the internet.

Internode MD Simon Hackett said Internode was “committed” to being first with the NBN in every new area that it was rolled out in.

However, there is at least one group not in favour of the NBN rollout in Armidale — the Opposition. This morning, Shadow Communications Minister Malcolm Turnbull continued a series of sustained attacks on the project, telling ABC Radio’s AM program that while it was a good thing for Australians in Armidale or anywhere else to have access to very fast broadband, the Government was spending more than was necessary to deliver on the policy aim.

“There is a better, faster and much cheaper way of doing it,” Turnbull said, noting it was possible to extend fibre from telephone exchanges closer to premises and deliver faster speeds — without going all the way to people’s homes and businesses.