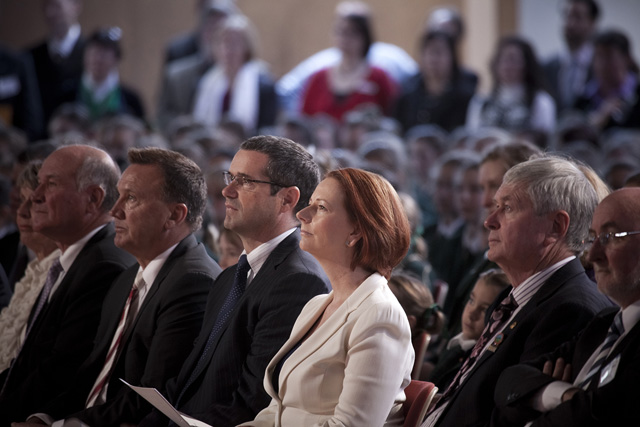 Communications Minister Stephen Conroy today said reports of low customer numbers on the fledgling National Broadband Network rollout in Armidale were “misleading and ironic”, given the network only launched on the mainland yesterday.

Conroy, along with Prime Minister Julia Gillard, local independent MP Tony Windsor, NBN Co chief Mike Quigley and a host of other parties officially launched the NBN in the Northern NSW city yesterday, claiming the Government had “made history” with the NBN reaching the mainland. However, shortly after, it was revealed that only a handful of customers had so far gone live on the network, with some outlets quoting as few as seven residents in the city using the network so far.

However, Conroy rejected the reports in a statement issued this afternoon, point out that 88 percent of Armidale residents invited to do so had so far signed up to have the NBN fibre connected.

“Media reports highlighting the few residents who have been carrying out initial testing on the network do not represent the level of interest, or the fact that the copper network will be decommissioned as part of the agreement between Telstra and NBN Co, which is currently being finalised,” the Minister said, pointing out that as the NBN was rolled out, almost every fixed line to premises would eventually be NBN lines, as Telstra’s copper network was simultaneously commissioned.

“In the meantime I look forward to more customers coming onto the NBN in Armidale and I also look forward to launching the other first release sites in the coming months.”

Conroy also commented on NBN Co’s approach to the mainland trials. “As you would expect, before NBN Co starts connecting customers they need to ensure the network is working without any glitches or problems. NBN Co carried out this initial testing in the lead up to yesterday’s launch and from now on more people in the Armidale footprint will be connected.”

Conroy said NBN Co’s approach was “responsible and sensible”, and it was “a shame” that some sections of the media didn’t recognise this.

The news comes as the NBN infrastructure continues to grow daily around Australia. This morning Internode announced it had launched ADSL2+ broadband services in Victor Harbour, using the backbone connection built to the remote South Australian town as part of the NBN rollout. Conroy said Internode’s announcement was “fantastic news” and represented a substantial improvement on the ADSL1 services on offer in the town.

This new infrastructure allows internet services providers, such as Internode, to expand their services into many regional parts of South Australia, including Victor Harbor,” he said.