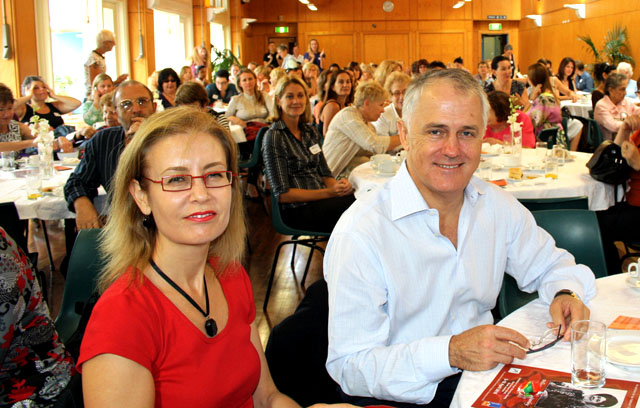 opinion When you ask the man on the street in Sydney what their opinion is of Shadow Communications Minister and multi-millionaire Malcolm Turnbull, you tend to get the same reaction over and over again.

“He’s an arrogant prick,” any taxi driver taking you into the city on a Friday night will tell you. “But you have to give him credit for sticking to his guns. That carbon thing …”

Turnbull – alternately ‘the Earl of Wentworth’ or ‘the Silver Fox’, as he is known variously amongst Sydney’s larrikins and gentle ladyfolk – has indeed earned himself a reputation amongst the punters which many politicians would envy.

The politician embodies the upper class lifestyle and demeanour which the best residents of Sydney’s wealthy Eastern suburbs enjoy, courtesy of both his privileged upbringing at Vaucluse Public School and Sydney Grammar Prep, followed by a finishing layer at Sydney University … as well as, perhaps, his natural inclination. This lends itself to a aura of arrogance about the man – he feels he is usually right – mediated by a sense of grandeur and gravitas which you cannot ignore.

In person, you feel as if Turnbull has that quality which would lend itself well to being Australia’s first President; a fact reinforced by his constant referencing of the classics in his writing. And yet he also shares with his rival Tony Abbott an aura which is necessary for all politicians – a fellowship with the everyday man. Seeing Turnbull in action at the Paddington RSL, clad in his casual leather jacket, collar and slacks, quipping about how Labor’s internet filter is “dead, buried and cremated, and if it shows any signs of revival it will then be exorcised,” leaves you in no doubt that the MP has the common touch. Turnbull’s laugh is an easy one.

Underlying all of this is the public’s very front-of-mind memory about the former Opposition Leader’s refusal to back down in the face of extreme opposition from Liberal Party ranks regarding his personal support for Labor’s Carbon Pollution Reduction Scheme proposal in late 2009.

Like the knifing of Kevin Rudd by Julia Gillard, Turnbull’s decision to stand by his principles on this matter has endured in Australia’s public consciousness. In fact, despite the negative political consequences of his actions at the time, Turnbull’s idealism has only reinforced his public image as one of the few members of Australia’s fickle political arena who are prepared to stand by their word – come what may.

But there’s a problem with idealistic individuals like Turnbull. The one chink in the armour of a leader such as the member for Wentworth is the difficulty they face when going up against an opponent even more idealistic and principled as themselves.

Such an opponent, Turnbull has found over the past year in the person of NBN Co Mike Quigley.

Like Turnbull himself, Quigley is quintessentially Australian and widely respected as a leader, an individual of integrity and above all, a man of his word, a fact easily demonstrated by his personal history and time leading portions of US and French networking giant Alcatel-Lucent, as well as the off-the-record accounts and extreme loyalty of his current employee base at NBN Co.

Over the past 21 months since his appointment to lead NBN Co, the executive’s primary success has been the concrete definition of his company’s roles and responsibilities as an independent entity within Australia’s fast-evolving political arena. By strictly defining NBN Co as a government business entity which is responsible only for implementing government policy, not setting it, Quigley has been able to navigate a safe path through the nebulous and treacherous maze which Communications Minister Stephen Conroy and the Rudd/Gillard Government have set for him.

Along the way, Quigley has faced down countless personal, professional and political storms that threatened to engulf him. The confused separation of NBN Co’s Tasmanian subsidiary. The uncertainty and potential obliteration of the 2010 Federal election. The deal with Telstra. And above all, the allegations of bribery at the former employer of Quigley and his CFO Jean-Pascal Beaufret, US and French networking giant Alcatel-Lucent.

With the exception of Quigley’s contentious decision to out the NBN as being capable of gigabit speeds during a critical point of the Federal Election (which continues to dog the executive), he has maintained both his nerve and integrity through the entire process – more so, to a great degree, than his political masters have been able to.

This convoluted process, which Quigley has been hit head-on with while continuing to deliver on construction efforts relating to the NBN, and the creation of a company around it, have left the NBN Co CEO in an unassailable position. While some may disagree with NBN Co’s exact approach, Quigley’s personal reputation in the telecommunications industry which he has devoted his life to serving is now impressive.

In addition, unlike Turnbull, Quigley has no need to pander to the popular opinion when it comes to the vagaries of Australia’s telecommunications market. His appointment is not dependent upon the voting interests of the public – the entire nation is his electorate, yet it will never get the chance to directly fire him.

And yet, Turnbull continues to assault him.

In what may have been a flippant remark this week, the Earl of Wentworth criticised Quigley in relation to the bribery scandal which over the past year engulfed his former employer, Alcatel-Lucent, slamming the CEO for not disclosing a US SEC investigation into the matter during his hiring process to lead NBN Co.

“It is remarkable that Mr Quigley and Mr Beaufret apparently did not consider a bribery scandal involving their previous employer was a matter they should raise with their future employer,” Turnbull said in an article by The Australian. Taken on their own, the MP’s comments would not be that unusual. After all, Turnbull is only attacking Labor’s chief plumber – the man who is responsible for implementing the Government’s vision. It’s a fitting approach for a member of the Opposition.

And yet, this is not the first time Turnbull has publicly attacked Quigley’s credibility.

In December last year Turnbull demanded the Federal Government “immediately respond” to the Alcatel-Lucent bribery scandal, specifically highlighting Quigley’s role in the company. “NBN Co claims neither Mr Quigley nor Mr Beaufret were aware of these bribery schemes,” said Turnbull in a statement. “But both men owe the Australian public a far more detailed explanation.” And then, today, in a friendly interview on 2UE radio in Sydney, Turnbull went further:

“… he’s got to acknowledge that there was a very serious misallocation or misappropriation of the company’s funds, of Alcatel’s funds … for criminal purposes in a fairly systematic way. And ultimately if you are the Chief Financial Officer, if something goes wrong with the finances of the company the buck ends up on your desk, and you are ultimately responsible.”

All of this adds up to an attack on, principally, Quigley’s character, which been demonstratably unimpeachable since he took his role at NBN Co – and, according to those who knew the executive before that time – beforehand. Turnbull is, of course, also attacking Beaufret directly. But we may take this as something of a side show. It is not coincidence that Beaufret – a French national – was appointed to lead NBN Co with Quigley. They are a partnership, a package. An attack on one is an attack on the other.

To say that Turnbull is caught between a rock and a hard place when it comes to his criticism of Quigley is an understatement. On the one hand, he is facing the need to maintain his own high profile and continue to see his name in the press, despite (in terms of his own standards) his political exile as Shadow Communications Minister. He would, of course – and, as he has pointed out, he only lost the ability to by one vote – be rather leading his own political party.

And yet, on the other hand, Turnbull is facing a man of a character which, unlikely though it is, exceeds his own. Quigley is the survivor of life-taking cancer, the internal intrigues of a major multinational corporation, an engineer at heart, and above all, a quiet man, a man dragged reluctantly into public life to discharge his debt to society.

Press conferences with Quigley are a privilege; a matter of letting his ideas expand into the room. With Turnbull, they are a matter of containing his ego long enough to get him to challenge his own ideas. It’s hard to say what the immediate future is for Turnbull in the communications portfolio. As the National Broadband Network continues to be rolled out, the politician will be forced to publicly realise, as he undoubtedly already does privately, that the Coalition’s stark opposition to the project is increasingly fruitless and will need to be discarded as the percentage of Australia connected to Government-funded fibre increases.

But one thing will remain constant throughout the next few years. If Turnbull continues to attack Mike Quigley in public, he will only erode the only real political asset which is left to him: His own integrity. When two opposing forces of seemingly equal strength face off against each other, it is inevitable that the one with the most fault lines will give way.

Turnbull knows this. It is why, despite his obvious interest in and passion for his portfolio, the MP has met with Quigley only once that the public knows about — in late 2010. Turnbull knows that direct confrontations between himself and Communications Minister Stephen Conroy will prove fruitful, due to Conroy’s penchant for mis-speaking; engagement with Quigley will not.

Turnbull has already been forced to make too many political compromises to prevail against a man who has never given in … nor faced the voters on election day. Quigley is the real deal. And the sooner the Earl of Wentworth realises that, the better.