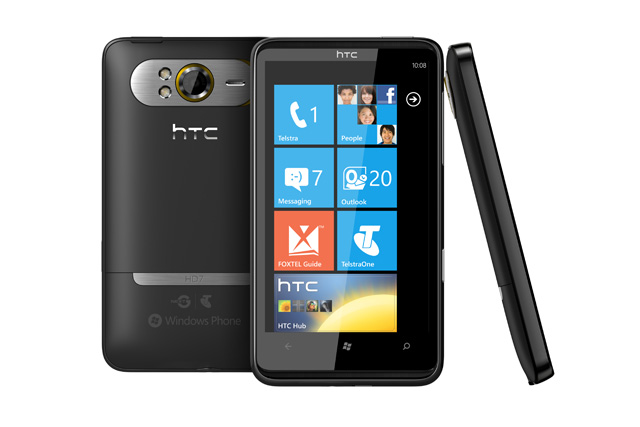 HTC this morning revealed its new HD7 handset — the Taiwanese manufacturer’s third smartphone to run Redmond’s Windows Phone 7 operating system — would be available exclusively through Telstra starting from next Tuesday 29 March, for a recommended retail price of $768, which can be repaid over 24 months when purchased with a Consumer Telstra Next G Cap or Business Mobile Plus plan.

At a launch event this morning, Telstra mobility products Director, Andrew Volard, said the size of the screen was a remarkable feature of this new device. “For a phone, it’s a very large screen,” he said, adding that the 4.3” Wide Video Graphics Array touchscreen with pinch-to-zoom capability would enhance users’ multimedia experience.

According to Volard, the wide screen allows for better screening of movies, live-stream television and playback of recordings. The HTC HD7 is also equipped with a 5 megapixel colour camera, with auto-focus and LED flash, and can capture videos at 720p HD. “HTC HD7 arrives at a time when Aussies are increasingly turning to their smartphones for entertainment and gaming,” Volard said in a statement. “They’re going to love the HTC HD7’s huge screen for playing videos or streaming Youtube.”

The HTC HD7’s case weighs 162 grams with battery and it 122 x 68 x 11.2mm wide. It sports a 1GHz processor, 16GB of internal storage and 576MB of RAM. As a result of the combination of these features, Telstra, HTC and Microsoft promise the device will also be able to offer console-quality video games through the integration of the XBOX Live platform.

HTC Australia and New Zealand country manager Ben Hodgson said the HTC HD7’s interface would appeal to new smartphone users for its ease-to-use, but at the same time would be attractive to browse for more experienced customers. The screen sports a series of “tiles” which link to the applications installed on the device, including the TelstraOne app which lists news, weather, sport and all that matters to the end-user.

Describing the functionality of the new handset, Hodgson said he was pleased the HTC HD7 would be available on Telstra Next G only and that the partnership with Microsoft had proven to be successful again.