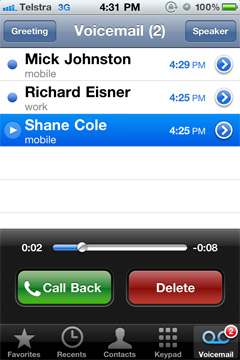 Two and a half years after much of the rest of the world got access to the visual voicemail feature used on Apple’s iPhone range, and a year and half after the service hit Vodafone locally, Telstra has implemented the option, announcing this morning that it would charge customers $5 per month for the privilege of using it.

Launched today for customers with a compatible Apple iPhone, the application manages voicemail through a visual window which lists recorded messages in date order, including the name of the caller, so that customers can access the voice recordings that matter to them most, without the need to listen to all messages.

To play back a message, users can browse to the log list and tap on the one they want to listen to. Also, a “Call Back” button enables customers to return calls quickly. “It’s a real-time saver as you can select the voicemail that’s important to you without having to call 101 MessageBank or play through all of your messages,” the telco wrote in a media release issued today.

Telstra has not yet responded to questions about why it took so long to launch the feature in Australia, and why it will cost users $5 per month, when Vodafone customers get it for free. Optus has not yet implemented the visual voicemail feature.

The news came as earlier this month, some of Telstra’s customers started a discussion on online forum Whirlpool.net.au, voicing their frustration at not having a visual voicemail application yet. The telco acknowledged the feature has been requested by many of its customers. “We know many of you have been asking for this feature for some time, so we’re really pleased that we’ve been able to design, test and now offer this to customers,” they said.

In order to benefit from the launch of the new app, customers need to own an Apple iPhone running iOS4.3 or later, connected to a Telstra mobile voice service on a plan.

Rival telco Vodafone has been offering its visual voicemail app for free for the past two years, but Telstra’s ‘MessageBank Plus’ will be available at a price of $5 per month. Costs include the delivery of voice messages to the iPhone within Australia, while “normal charges” are applied when hitting the “call-back” button. International data roaming fees apply when checking your voicemail from overseas.

To be MessageBank Plus-ready, customers should contact Telstra and activate the service on their mobile phone. Users can customise their app by recording a personal greeting or re-using one they recorded before. When satisfied with the playback of the messages, customers can empty the folder on both their iPhone and MessageBank.